From Gen Chem to Organic Chem, Pt. 2 – Electrons and Orbitals 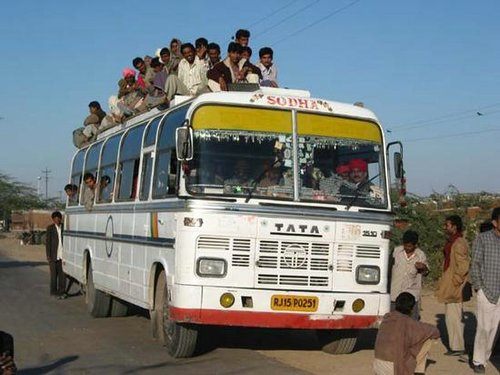 An atom is (a little bit) like an Indian bus.

This is how they work.

You get in and find an empty seat. The seats fill up.

Then people stand in the aisle. The aisle fills up.

Then people get on the roof. The roof fills up. (Or not).

Then you’re ready to go.

The seats are the most comfortable place to ride. That’s why they fill up first. Ever been on a bus where everyone is standing in the aisle and nobody is sitting in the seats? Of course not. We’re far too lazy to allow that to happen.

Maybe we can draw a comfort diagram here.

If you look around you’ll see lots of examples of this behavior. Queues. Seating arrangements in the living room at Super Bowl parties. Open-admission concerts. Whenever a preferred place vacates, there is a rush to fill it.

Electrons in an atom are just like passengers in a bus: they each need their own seat, and the seats fill up in a very specific order. The “one butt per seat” principle is in effect – just as you can’t have 2/3, 0.17 or another fraction of a human, you can’t have a fraction of an electron either. This is what we mean by quantization. The fact that they fill in a specific order is called the aufbau principle or building-up principle.

The “seats” for the electrons are areas of space we call orbitals. Orbitals are regions of space which represent 3-dimensional graphs of an electron’s likely location.  Whereas seats correspond to the shape of the human form, the shapes of orbitals are described by an equation developed in the 1920’s by Erwin Schrödinger that we call the Schrödinger wave equation. (Schrödinger figured out that the energies of electrons can be calculated quite effectively by treating them as waves).

If you take upper level chemistry courses, you learn how to play around with the Schrödinger wave equation. If not, here’s the boiled down version.

Just as people seek the most comfortable seat on a bus, electrons seek the orbital that is closest to the nucleus – where the force of attraction between the positively charged nucleus and the negatively charged electron is greatest.

These are the only values that provide solutions for the Schrodinger wave equation.

That’s it. Two electrons. If we want to add more electrons we have to increase n. This is like filling up the seats on our bus and then adding the next group of passengers to the aisle.

The next set of electron “passengers” have to go into the aisle, where n=2.

So for n=2 we have a total of 8 electrons: 2 for l=0, and 6 for l=1. If we want to add more electrons, we have to increase n again (to 3) which is like filling the aisle of our bus and sending the next group of passengers up to the roof.

Let’s stop here for a second. the different numbers l=0 and l=1 correspond to different shapes of orbitals. In practice we have names for them. They are the S and the P orbitals.

s orbitals look like spheres.  How do we know this? From the wave equation. The fact that m=0 is a clue – it means there is only one orientation possible across all the axes, which can only be possible for a sphere.

p orbitals look like teardrops. Again, we know this from the wave equation. What’s interesting here is that we can have 3 different values for m. In practice what this means is that there are 3 different ways to orient the orbitals – along the three different axes x, y, and z.

In Org 1 and Org 2 we will deal exclusively with s and p orbitals. The shapes have tremendous consequences for chemical bonding, as we shall soon see.

If you take upper year courses you’ll learn more about the d orbital series, since transition metals have many important applications in organic chemsitry. Chemistry of the d orbitals is pretty fascinating. In contrast, the chemistry of atoms involving the f-block tends to be pretty similar, since at this point the electrons are really far apart from the nucleus and thus are far less differentiated. That’s why the lanthanides are often found as mixtures – often the trouble is separating their minerals from each other.

The higher orbitals than that (g, h, etc.) dont really appear in chemistry because the very heavy nuclei you’d need (>120) are extremely unstable. Someone has come up with an extended periodic table which incorporates g-block elements. Beautiful! – but more of theoretical rather than practical interest.  Compare it to our Indian bus – you could keep adding platforms on top of the bus to fit successive levels of passengers, but there comes a point where the whole thing is just going to collapse under its own weight.

14 thoughts on “From Gen Chem to Organic Chem, Pt. 2 – Electrons and Orbitals”