The latest version of Reagents contains a “social graph” for reactions

A new version of Reagents was released a few months ago, and it comes with two powerful new features that weren’t in the first version. I’ve been remiss in not mentioning it until now, so that’s what I’d like to do today.

When my collaborator Rich Apodaca and I first built Reagents last summer, the design was very simple. It contained a master list of different reagents, and tapping on any of the individual entries would allow for the user to see examples of different reactions. As it turns out this is turns out to be a fairly common design for an app:  it’s called “Master-Detail”

Essentially each of the 80 reactions in the app was in its own “bucket”, or silo. Tapping on an individual reagent brought up all of the reactions it was involved in. Like this: 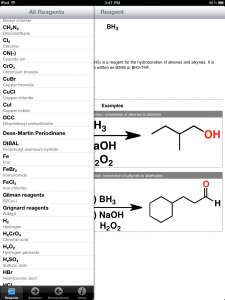 With over 200 individual reactions contained within the Reagents App, this approach worked well enough. But when it came to the development of Reagents 2.0 , we wondered if there wasn’t some way to add value to the reaction set through appropriate labelling and display of additional information.

Forward reactions are organized in what we’ve named the Synthesis feature. Here an example showing all the reactions of “alcohols, primary”. 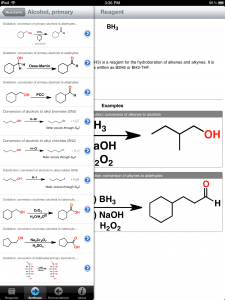 Conversely, if you were interested in all the reactions that provided you with an alcohol, you could use the new “retrosynthesis” feature to call up that set: 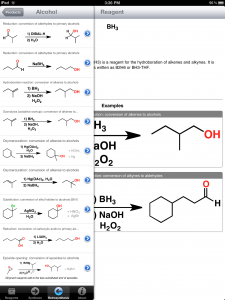 What’s key here is that it involved no new input of reaction files. By simply labelling each reaction component we’ve brought each reaction out of its individual reagent “silo” and allowed the user to organize reactions in different dimensions. This can help the user to see connections that weren’t previously visible through the normal “Reagents” view. It’s a bit like a Facebook moment when you say to yourself: “wait? those two guys know each other?”

As Rich alluded to in a previous article, the result of the Synthesis and Retrosynthesis functions is a lot like Facebook’s “social graph” – except for reactions. 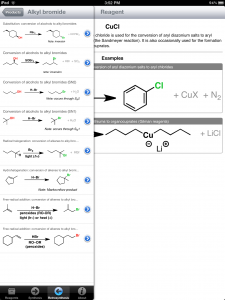