Note (from James) When my friend Adam  from The Chemistry Blog offered to write a series of posts on Substitution and Elimination, I immediately said “yes”. This is one of the topics that many students struggle with, particularly at this time of year. Adam has been writing for years on organic chemistry topics [check out this and this ], and describing his journey as a chemical educator. So in case you find my own posts on the subject obtuse, or just need a slightly different perspective, I hope you’ll benefit from this series. Without further ado, the floor is yours Adam!

You are my density, or why electrons are like a hyperactive child, by @Azmanam

First of all, thanks to James for letting me guest blog this series. I really appreciate it. My home blog is www.chemistry-blog.com, and we would love to have you visit from time to time. Or follow me on Twitter @azmanam. I’ve been an organic chemistry instructor for three years at a smaller Midwestern university. I love teaching undergrads, and I love teaching organic chemistry. Over the next series of articles, I will walk you through the historically confusing concept of substitution and elimination reactions. This more or less follows the course of my lectures through this unit. This first post will be an overview and will set the stage for everything that follows.

A hyperactive child in a small room is going to be bouncing off the walls! Driving everyone crazy! It’s a very unstable situation.

But… if you throw that child out in the backyard… he’s got plenty of room to run around… everyone’s happy… everything is just more calm and under control that way. It’s much more stable.

Electrons are the same way. If you try to jam a lot of electron density IntoAVerySmallVolume, ALLTHATENERGYMAKESTHEMOLECULEUNSTABLE!! Electrons do not like to be confined in a very small volume.

But, if you spread that electron density out, say by delocalizing it over several atoms through resonance, the electrons have more room to run around, and they are much more stable, and we all can breathe a sigh of relief. It’s much more stable. This holds for charge density in general, whether negative charge density or positive charge density. We will want to keep this analogy in mind as we try to find a rational way to make sense of these reactions without resorting to memorizing. 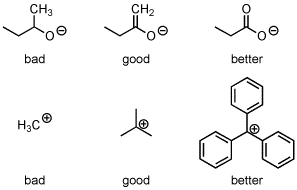 There are four main components we will need to address in order to understand substitution and elimination reactions: the nucleophile, the electrophile, the leaving group, and the solvent. Understanding how the functional groups in each of these components modulate electron density will be the key to unlocking the mystery of substitution and elimination. Different nuances in each component serve to either concentrate electron density into a smaller volume, or spread electron density out over a larger volume, and this difference can push a reaction to follow one path or another.

But this is also the source of the greatest confusion, so I’ll warn you about it upfront. All of these components will start to look the same after a while, and it will look like some seemingly minor change in a molecule will completely change the outcome of the otherwise identical reaction! How are we supposed to keep it all straight?

By being good diagnosticians. In fact, congratulations! You’ve just been hired as the newest doctor on Dr. Gregory House’s crack team! (pretend they’re bringing the show back) They always take the hardest, most confusing cases where the symptoms seem to point in contradictory directions. They have to dig through all the symptoms to find all the evidence, then figure out how all the parts fit together to arrive at a brilliant diagnosis. These reactions are your ‘House Patients’. It’s up to you to assess all the evidence to come up with the brilliant diagnosis of the correct reaction pathway.

And that’s how the rest of the posts in this series are going to go. I’ll introduce all the major systems and components. We’ll look at what evidence we can gather from the leaving group, the nucleophile, the electrophile, and the solvent, and I’ll show you how to assess all the evidence as a whole to diagnose the reaction.

My next post was going to cover the 4 possible mechanisms and the evidence for each, but I noticed James already has a fantastic round up of the substitution (SN1 and SN­2) and elimination (E1 and E2) mechanisms. I don’t have anything to add to these posts, so I won’t repeat content James already has. Instead, between this post and the next post, I want you to look over James’ write up of the four mechanisms. Make sure you’re familiar with the four mechanisms, and we’ll pick up next time with assessing the leaving group.

Next: “3½ Steps To Any Substitution or Elimination Reaction: The Leaving Group“