Imagine you have a clock. Not a digital clock. One of those old fashioned clocks with two hands. Let’s try something.

Make the clock show high noon, so that both hands are pointing at 12.

Now pin down down the hour hand so it can’t move. (Or if you want, pin down the minute hand. Either one, it doesn’t matter).

Now we’re going to slowly sweep it through one whole rotation: 360 degrees.

We call this angle the “dihedral angle”.
That circle with all the groups pointing out of it also looks a bit like a clock . This is called a Newman Projection. It’s a useful tool for visualizing these rotations.

Now imagine keeping one of the methyl groups fixed in place and sweeping the other one just like you did with the clock – 2 hours (60 degrees) at a time. You’d get a pattern like this:

So what? you might ask. In another tip, I’ll show you how to apply this. 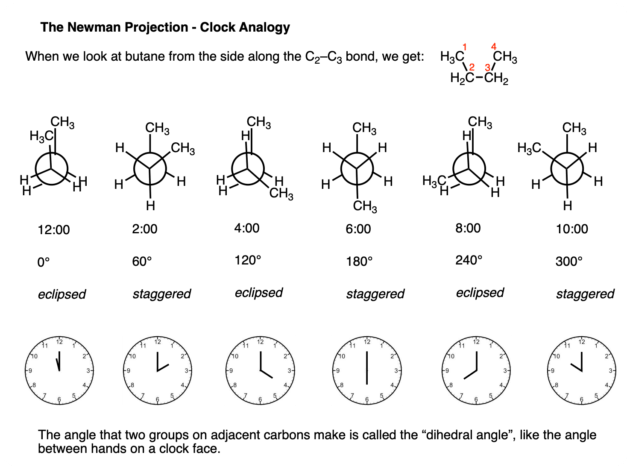 Thanks for reading! James
PS – it’s actually arbitrary which group you choose as the “minute hand” and which you choose as the “hour hand”, so long as they are on adjacent carbons. For butane we usually choose the two methyl groups because they’re unique. But as long as you’re consistent. you’ll get the same result no matter what two groups you choose.
P.S.S. The Newman Cat Projection

NOTE: These settings will only apply to the browser and device you are currently using.

Google Analytics is a web analytics service offered by Google that tracks and reports website traffic, currently as a platform inside the Google Marketing Platform brand. Google launched the service in November 2005 after acquiring Urchin.