Just in case you forgot, here’s a quick guide to how to figure out what kind of solvent you’re looking at. 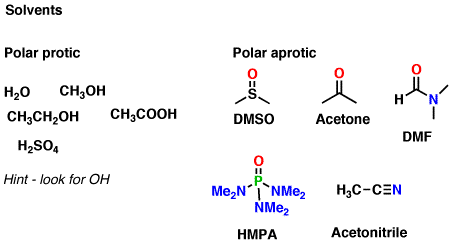 After we ask ourselves about the substrate and the nucleophile, the next question to ask about a reaction to tell if it’s SN1/SN2/E1/E2 is to look at the solvent.

Where the identity of the solvent comes in most handy when you have a secondary alkyl halide, a strong nucleophile/base and have to figure out if it’s SN2 or E2.

Let’s look at the 4 examples again. 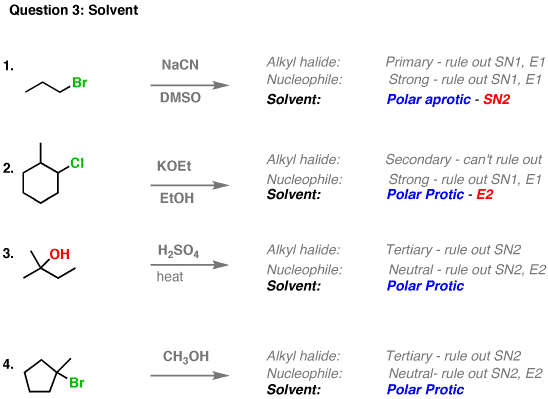 In the first example, the use of a polar aprotic solvent (DMSO) rules out the E2, so we now know that this reaction is SN2.

In the second example, the use of a polar protic solvent (EtOH) rules out the SN2, so we know the reaction is E2.

Solvent doesn’t help us with figuring out the  third and fourth examples (deciding SN1 and E1). For that, we’ll have to ask the final question. More on that tomorrow.