My Organic Chemistry Story – What’s Yours?

Late one Friday night in building 18 at MIT a few years ago I synthesized a molecule called dideoxyverticillin. It looks like this. 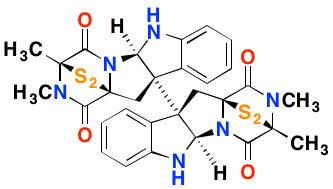 It’s part of a family of molecules that had evaded synthesis for over 40 years and required solving some particularly tough synthetic problems.  Our work was published in Science, arguably the world’s most prestigious scientific journal, and the synthesis was covered in chemical news sites like C&E News, Totally Synthetic, and even given its own chapter in the book, “Classics In Total Synthesis III “.

You might think that in order to be part of an achievement like this, I must have been an organic chemistry prodigy, born with the ability to memorize reactions with ease,  do synthesis in my sleep, and draw perfect hexagons from the age of 4.

That’s far from accurate. Actually, my grade in sophomore organic chemistry was 68 – a C+ in the Canadian system.

In other words, mediocre. Class-average.

And it’s not like I slacked off. From the moment I knew I would have to take organic chemistry,  I was excited to learn about it and determined to do well in my class. I was aware of its reputation for being difficult so I decided I would work as hard as I could to succeed.

Here’s some of the work I put into the class:

I never had as much concentrated time to prepare for an exam. And I don’t recall a single class from my undergraduate career where I had wanted to do well as badly as in introductory organic chemistry.

And despite all of this – I still got a C!

I desperately needed a result in the 80’s to bring my mark up to the low B-range, but instead I got something like a 64. I went to the instructors office after we got our exams back, on the verge of tears, wondering where I went wrong. In the pressure of the exam, I missed things like seeing that CH2O can be used as a “reagent” to form acetals, for example.

Here’s the unfortunate lesson I took away from my experience in organic:

No matter how hard I try in organic, I’m bound to fail. I’m not smart enough to do organic chemistry. Other people smarter than me were lucky enough to be born with the ability to do organic, but not me.

And for years, I believed that. It’s a long story, but eventually, I realized that organic chemistry was the intellectual love of my life, and came back to it.

Unfortunately, many take the same lesson from organic chemistry as I initially did, and it scars them in some way. To this day sometimes when I tell people I’m an organic chemist they say, “ugh, I [frickin’] hated that class!”.

Here’s some lessons I wish I had taken away from my organic chemistry experience instead.

I could go on about how I am still bitter that my instructor didn’t do a better job of explaining some of these latter concepts but I don’t want to belabour the point. I will say that part of the reason I started MOC was in the hope that I could reach people who are struggling with organic chemistry and help coach them through the course in a way I never was, and maybe help them avoid the wasted years of feeling “dumb” that I experienced.

What have you learned from taking organic chemistry?

Reply in the comments.