Description: Hydroboration-oxidation transforms alkenes into alcohols. It performs the net addition of water across an alkene.

Notes: Note that the oxygen is always attached at the less substituted carbon (anti-Markovnikoff). Furthermore the stereochemistry is always syn (H and OH add to same side of the alkene).

The boron byproduct will depend on the # of equivalents of BH3 used reative to the alkene. Here their molar ratio is 1:1. One equivalent of BH3 can hydroborate up to 3 equivalents of alkene.

BH3-THF is the same as BH3. Tetrahydrofuran (THF) is merely a solvent. Sometimes B2H6 is written, which is another form of BH3. It behaves in exactly the same way as BH3.

You might also see 9-BBN or (Sia)2BH. These are hydroboration reagents in which two of the H atoms in BH3 have been replaced by carbon atoms. They will do the exact same reaction as BH3.

Notes: Note in example 2 that the hydrogen and oxygen add to the same side of the alkene (syn addition)

The reaction begins with the concerted syn addition of B and H across the double bond, with the boron adding to the less substituted carbon (Step 1, arrows A and B). In the second step, hydrogen peroxide and a base such as NaOH are added. the NaOH deprotonates the hydrogen peroxide (Step 2, arrows C and D) which makes the conjugate base of hydrogen peroxide (a better nucleophile than H2O2 itself). The resulting NaOOH then attacks the boron (Step 3, arrow E). This sets up the key migration step, where the carbon-boron bond migrates to the oxygen bound to boron, breaking the weak oxygen-oxygen bond (Step 4, arrows F and G). The OH expelled then comes back to form a bond on the boron (Step 5, arrows H and I) resulting in the deprotonated alcohol (alkoxide). The alkoxide is then protonated by water or some other comparably acidic species (Step 6, arrows J and K).

Notes: In step 1 the addition is syn and the reaction is concerted.

If excess alkene is present the two remaining B-H bonds can do subsequent hydroborations.

The migration step (Step 4, arrows F and G) occurs with retention of stereochemistry at the carbon.

For the last step it’s reasonable to use water, HOOH or any other comparably acidic species as the acid. 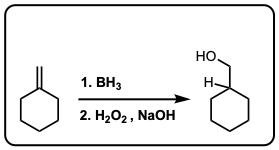 45 thoughts on “Hydroboration of Alkenes”