Description: The Sharpless Epoxidation is an enantioselective epoxidation of allylic alcohols.

Notes: The Sharpless epoxidation only works for alkenes adjacent to an alcohol (CH2OH). The oxidant is t-butyl hydroperoxide, sometimes written (CH3)3C–OOH or abbreviated TBHP. The catalyst is titanium tetraisopropoxide, written Ti[Oi-Pr]4 or Ti[OCH(CH3)2]4. The additive that imparts chirality is diethyl tartrate (DET). Choosing (+) or (–) diethyl tartrate [full names: L-(+)-diethyl tartrate and D(–)-diethyl tartrate – one can omit the L or D without penalty] allows one to choose the major enantiomer that is formed in this reaction [see “Mechanism” section for specifics].

The major product can be predicted by use of a mnemonic (see below). 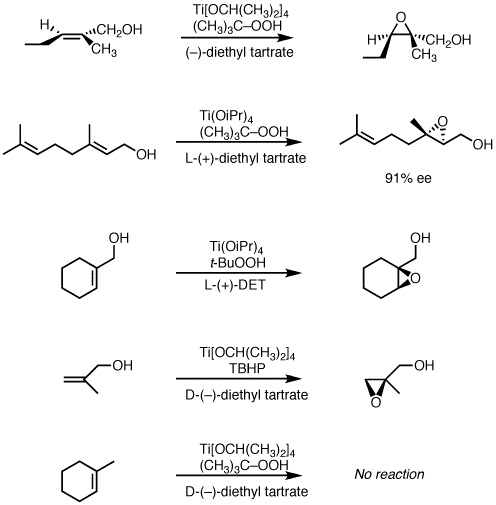 Notes: As far as the reagents are concerned, each of these examples just shows different ways of representing the key titanium catalyst and t-butyl hydroperoxide. The only difference is in the choice of diethyl tartrate (sometimes abbreviated DET) enantiomer.

Example 1 shows an epoxidation of an alkene drawn in the “side view” which clearly shows that using (–)-diethyl tartrate leads to epoxidation from the top face when the allylic alcohol is drawn in this orientation.

Example 2 shows that epoxidation only occurs on the alkene adjacent to CH2OH, the other alkene is untouched [BTW, this is because the OH coordinates to titanium]

Examples 3 and 4 show the major products formed with each of these alkenes, predicted by using the mnemonic (below).

Example 5 shows that no reaction occurs when an alkene without a neighbouring alcohol is used.

Mechanism: Without going into specific details, what happens in the Sharpless epoxidation is that the titanium binds to the allylic alcohol, t-butylhydroperoxide, and the tartate in such a way as to provide a chiral environment whereby one face of the alkene is preferentially exposed to the oxidant. The outcome of a Sharpless epoxidation can be predicted by using the following mnemonic. Placing the CH2OH group in the upper right hand quadrant, using (–)-DET will lead to epoxidation of the top face, whereas (+)-DET will lead to epoxidation of the bottom face.

Notes: If you’re really interested in learning more about how this reaction works, along with many excellent examples, this handout by the Myers Group at Harvard University is phenomenal (as are their other handouts)