Description: When secondary (or primary) carbocations are formed adjacent to a quaternary carbon, 1,2-alkyl shifts can occur.

Notes: The acids in these reactions is often sulfuric acid (H2SO4) or tosic acid (TsOH) because the conjugate base of these acids are very poor nucleophiles. 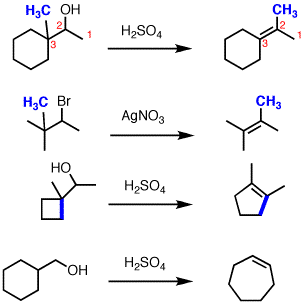 Notes: In the first and second cases a methyl group shifts over by one carbon (in the second example, silver nitrate  AgNO3 (-) is a Lewis acid that makes halides such as Br better leaving groups).

In the third example the cyclobutane ring expands to give the five-membered ring, which has less ring strain.

Mechanism: Formation of a carbocation is achieved here through protonation of the alcohol with strong acid (Step 1, arrows A and B) followed by loss of water to give the carbocation (Step 2, arrow C) . Next, migration of a methyl group from the adjacent quaternary carbon through a transition state such as that pictured (Step 3, arrow D) gives a tertiary carbocation which undergoes deprotonation (Step 4, arrows E and F) to form the most substituted alkene (between C-2 and C-3)