So what are some of the most common mistakes we can make in organic chemistry?

Given the relatively qualitative nature of sophomore organic chemistry, it should not be surprising that there is truly an astonishing variety of ways to screw things up. Today I’l just mention one mistake in particular, but it is probably the biggest mistake of them all – drawing 5 bonds on carbon.

Among those of us in the field, 5-bonded carbon – pentavalent carbon – goes by another popular nickname: Texas carbon. Why? A picture makes it pretty self-explanatory. 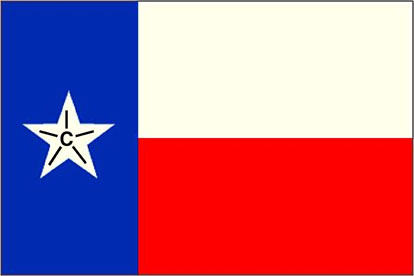 While Texas carbon that resembles the emblem of the Lone Star State is the easiest to spot, there are other, more subtle variations. Let’s look at a few.

What are the key principles at work here?

1. The number of bonds to carbon cannot exceed four

Carbon has a single 2s orbital and three 2 p orbitals available in its valence shell, and thus can form a maximum of four bonds. While this might be easy to spot in the case of the “lone star” variant, it’s a little trickier to see in the context of sp2 and sp3 carbons, especially for the beginner.

Probably the most difficult pentavalent carbon to spot is in condensed structural formulas, where the bonds aren’t explicitly drawn out.

Mistakes such as CH3CH2(CH3)2 can be easy to make and hard to find.

2. The number of orbitals around carbon cannot exceed four

Part of the confusion here stems from the inherent laziness  of chemists in depicting chemical structures: we often neglect to draw in lone pairs and C–H bonds, but you’re just supposed to remember that they’re there. (See article: Hidden Hydrogens, Hidden Lone Pairs, Hidden Hydrogens)

Remember that a negative charge (–) signifies a lone pair of electrons around carbon, even if the lone pair isn’t explicitly drawn in. This occupies an orbital.

Likewise, when you see a (+) drawn beside a carbon, that implies the existence of an empty orbital around the carbon. Hence the “anionic” and “cationic” variants drawn are also examples of forbidden carbons.

3. The same principles apply for other first-row elements

Oxygen and nitrogen (and fluorine and boron, for that matter) cannot exceed the maximum of four orbitals/eight electrons either.

A word of advice, especially for exams: paranoia . This can be an exceptionally easy mistake to make, but you’ll get better at spotting these things with practice.

Trust me: your professor, your TA, and everyone else who has ever taken organic chemistry has made this mistake at some point. I’ve done this myself too many times to count.

One never gains a magic ability to avoid drawing Texas carbons, but over time, like with most things, a certain low-level fear sets in that helps to catch these mistakes right after they happen.  If one of the world’s most outstanding chemists can miss seeing a pentavalent carbon, anyone can.