In this article, we investigate electrocyclic ring-opening and ring-closing in systems with 4 pi electrons (“4π” systems).

Look closely at the stereochemistry below!

Much more detail below. In a future post we’ll cover the rules for systems with six pi electrons ( “6π “) and higher.

1. Electrocyclic Ring-Opening of Cyclobutene To Give Butadiene

The year was 1905. Chemist Richard Willstätter and his collaborator Wolfgang von Schmaedel were heating a reaction mixture in their laboratory at the University of Munich. They were performing a fairly routine elimination reaction that has now become known as the Hofmann elimination.

The expected product was cyclobutene.

When the reaction mixture was analyzed, cyclobutene was indeed formed. Mysteriously, however, considerable amounts of 1,3-butadiene were also isolated.

This was a strange and unexpected result! Willstätter had no clear understanding of how 1,3-butadiene had formed at the time, and it would remain thus. He would go to his grave (in 1942) without knowing that he had accidentally discovered what would later be called an electrocyclic reaction; specifically, the electrocyclic ring opening of cyclobutene. And it’s not as if Willstätter was a chump; a few years later he was the first to synthesize cycloöctatetraene, and a few years after that he would win the Nobel Prize in Chemistry for determining the structure of chlorophyll and other plant pigments. [Note 1]

In the following decades, the reaction (and its many variants) was studied in more detail.  It was verified that heating cyclobutene did indeed form 1,3-butadiene.

Interestingly, however, heating cyclobutane did not lead to any ring-opening reaction.

2. Electrocyclic Ring Closure Of 1,3-Butadiene to Give Cyclobutene

In time, it was also found that 1,3-butadiene was also capable of undergoing the converse reaction: a ring closure to give cyclobutene.

Due to ring strain [see post: Calculation of ring strain in cycloalkanes] the closure of 1,3-butadiene to butadiene is usually unfavorable, but certain substituted dienes can be coaxed into closing the ring [see below].

(Note: The ring strain in cyclobutene is about 29.6 kcal/mol, compared to 26.3 kcal/mol for cyclobutane)

Since cyclobutene and 1,3-butadiene can interconvert, this implies that electrocyclic ring-opening and electrocyclic ring-closing goes through a common transition state, and there is an equilibrium between these two molecules at high temperatures.

It’s helpful to examine the bonds that form and break.

Moving beyond cyclobutene to substituted cyclobutenes, a very interesting pattern is observed: the stereochemistry in these reactions follows a well-defined pattern.

Electrocyclic ring opening is a stereospecific process. A reaction is termed stereospecific if starting materials differing only in their configuration are converted into stereoisomeric products.[Note 3]

A classic example is cis- and trans– 3,4-dimethylcyclobutene , which are stereoisomers that differ only in their configuration. [For a review, see: Types of Isomers]

The trans, cis diene and the trans, trans diene are stereoisomers.

In other words, if if you know the configuration of your starting material, and you know the “rules” that the reaction follows, you can predict the product with 100% accuracy.

[Electrocyclic ring closure is stereospecific too – hover for image or click this link.

Like the Diels-Alder reaction, the patterns governing electrocyclic reactions are also understood by analyzing the molecular orbitals. In this case since the reaction occurs within only one pi system, we only have to worry about the HOMO.

What does the highest-occupied molecular orbital (HOMO) of 1,3-butadiene look like? We’ve seen how to build up the pi molecular orbitals here. [see: The Pi Molecular Orbitals of Butadiene and How To Draw Them] so we’ll skip right to the punch line.

The highest-occupied molecular orbital of butadiene is drawn below. Note how it has only one node (i.e. where there is a change of sign), between C-2 and C-3. (It doesn’t matter which of the two ways you draw the orbitals, so long as it only has one node!)

In the reaction of 1,3-butadiene –> cyclobutene, a new sigma bond is formed between C-1 and C-4 termini.

Where do the orbitals that form this sigma bond come from? From the p orbitals on C-1 and C-4 that are breaking their pi bonds with C2 and C3 respectively!

In order for a bond to form, there must be constructive overlap between these two orbitals.  By “bonding interaction” I mean that they both have to have the same phase, either both shaded or both white.

What happens if they don’t both turn either clockwise or counterclockwise? No bond forms, because the orbitals have the opposite phases and thus destructive orbital overlap!  Hover for image or click this link

We can also analyze the reaction in the reverse direction, where the sigma bond is being converted into a pi bond. In this case, the lobes also turn the same direction in order to be converted into the HOMO of butadiene.

Note again that both of these lobes rotate in the same direction; either both clockwise or both counterclockwise.

Since the phrase “rotation in the same direction” comes up so much, it has been granted a special name. We call it “conrotatory” rotation, as exemplified in these “double egress” hospital doors.  [Note 5]

It’s not just the p-orbitals that rotate in a conrotatory fashion – it’s the atom itself, which means that the two other substituents come along for the ride.

Understanding that the terminal carbons must rotate in a “conrotatory” fashion for 4pi electrocyclic reactions is the whole key to being able to predict the stereochemistry.

For these reactions, it helps if you imagine looking at the molecule from the front.

Here’s an example of 3,4-dimethylcyclobutene, showing how the two methyl groups each rotated the “same way” (conrotatory), resulting in the cis-, trans- product.

Applying the same rules to trans-3,4-dimethylcyclobutene results in the trans, trans diene.  [Note 4]

Ready to try it for yourself? Try this quiz.

What about the going in the opposite direction, from a diene to cyclobutene? How do we predict the products in this case?

By applying the exact same methodology. The terminal carbons will rotate in a conrotatory fashion.

Again, it’s helpful to look at the molecules from the front. Here’s an example of a cis-, trans- diene undergoing conrotatory ring closure, either both-clockwise or both-counter-clockwise.

It turns out there’s another way to coax electrocyclic reactions to occur, other than heating the crap out of them.

Light  (which we denote as hν ) can also do the trick. (In the cases of dienes, we’re generally talking about UV light here, since their absorbance maxima are deep into the UV.)

Since the symmetry of the lobes on C-1 and C-4 are different between π2 and π3, the terminal carbons have to rotate in opposite directions in order to form a bond, in contrast to “thermal” conditions where they needed to rotate in the same direction.

This term, “rotation in opposite directions” goes by the name, “disrotatory”, as demonstrated by the opening and closing of these double doors.

10. The Orbital Symmetry Of Electrocyclic Ring Opening Under “Photochemical” Conditions

Since electrocyclic ring-opening follows the reverse pathway from ring-closing, we can apply the same rules in the opposite direction.

When breaking the C-C sigma bond, the lobes must break such that they align to re-form the pi bond, which occurs through adopting the orbital symmetry of the  π3 orbital (i.e. with two nodes). That can only happen if the carbons rotate in opposite directions. [Note 6]

Let’s now apply these rules and see what happens to the stereochemistry of the substituents under photochemical conditions.

Again, it usually helps to look at the cyclobutene end-on to visualize the lobes as a set of double doors that you push or pull open.

Note that in this case, only one disrotatory option is possible, since the alternative would result in a highly strained trans- double bond within a cyclohexene ring.

This has been a lot. Here’s what we’ve seen.

This can all be summarized in this short table:

So what about larger pi systems?  In the next post we’ll cover 6 pi electron systems (and 8 if we have time). The same concepts will apply!

Note 1. As so often happens in organic chemistry, experimental observations preceded the theoretical understanding of those observations. The details of this process were not completely worked out until the 1960’s with Woodward and Hoffmann’s work on the conservation of orbital symmetry [Ref].  (Despite how “obvious” the textbooks make these reactions appear to us now, organic chemistry is not a series of logical deductions, like math.) 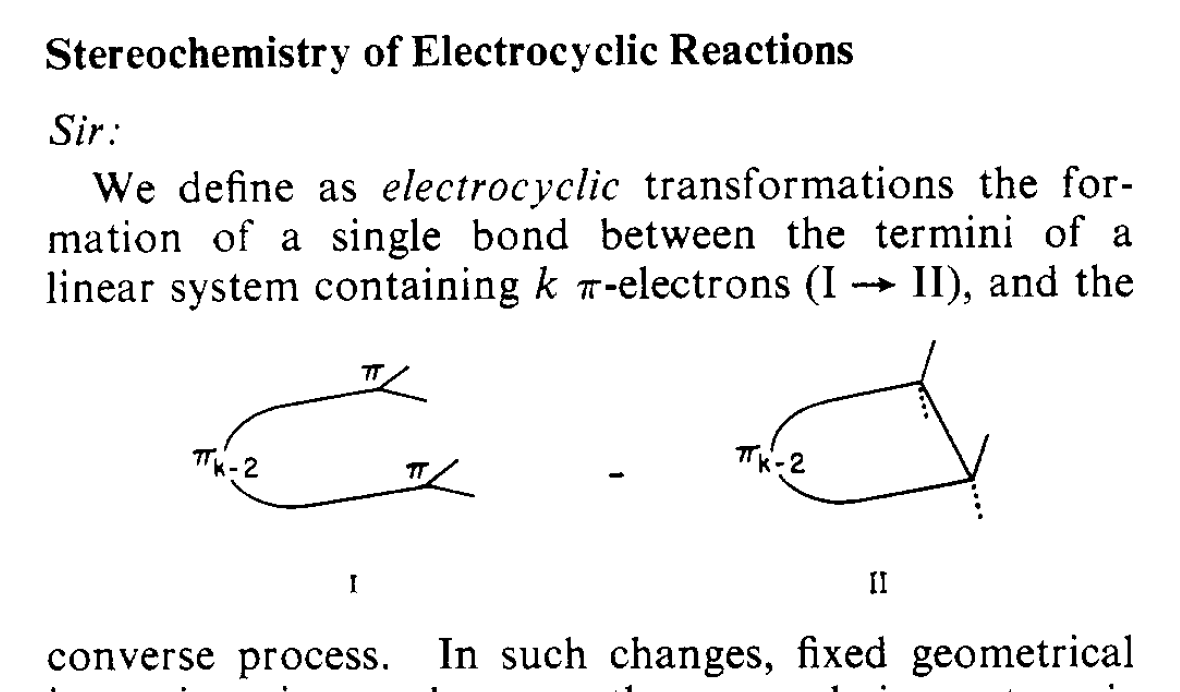 Note 3. Definition of a stereospecific reaction, from IUPAC:  “A reaction is termed stereospecific if starting materials differing only in their configuration are converted into stereoisomeric products.”

Note 4. For our purposes we treat, “both clockwise” and “both counterclockwise” as equivalent, but there are cases where one of the two modes is favored. This is called, “torqueselectivity”, (see ref.)

Note 6. You might wonder: what happens if photochemical ring opening occurred in a conrotatory fashion? Would that really be such a big deal? Well, since the orbital symmetry differs from π3, the electrons would not be part of the pi system (at least initially), and would instead have “di-radical” character. These “disallowed” pathways can occur sometimes, but usually have transition states that are higher in energy than the “allowed” pathway.