In this article, we’ll cover the nitration and sulfonation of benzene!

2. Addition of NO2 (Nitration)

Don’t Try This At Home

“Nitration” is the name we give to the process of attaching the nitro group (NO2) to a molecule.

If we skipped this reaction in previous chapters,  it’s because nitrating functional groups other than aromatic rings leads to some pretty explosive products.   For example, nitration of the tri-ol glycerol produces the infamous nitroglycerin, with three excellent leaving groups (ONO2 ; technically, these are “nitrate” groups, not nitro groups). The slightest disturbance to this liquid leads to a chain reaction resulting in the rapid generation of hot gas. [Note 1]

My dad and his neighborhood buddies all made black powder and other explosives when they were kids, but making “nitro” was considered the Holy Grail.  One day, my dad got all the material ready for making  nitroglycerin, but on the day when it came to actually making the stuff, he chickened out.  Wise move, Dad. It’s pretty hard to to do surgery when you are missing a couple of fingers.

Similarly, nitration of cellulose (a polymer of the sugar glucose) produces “nitrocellulose“, which besides being used in smokeless powder, is a polymer used as film stock in the early days of the film industry. “Celluloid”, as it was called, is not a contact explosive, but it does have the unfortunate property of being prone to spontaneous combustion. (Hollywood later moved to cellulose acetate, a.k.a. “safety film”. )

In contrast to nitration of alcohols, the nitration of benzene produces relatively stable nitro compounds that are much more difficult to detonate. For example, the high-explosive TNT (2,4,6-trinitrotoluene) is formed by triple nitration of toluene. Another explosive, RDX comes from nitration of trihydro-1,3,5-triazine. [Note]

The key reagent for nitration is nitric acid, HNO3. By itself, nitric acid is a relatively slow-acting electrophile, especially in the presence of a poor nucleophile such as benzene. [Note – in the case of phenol and other aromatic rings with strongly activating groups, HNO3 by itself is sufficient for nitration].

Upon addition of acid, however – the usual choice being sulfuric acid, H2SO4 – a rapid reaction with benzene ensues.

The key to the process is protonation of OH on nitric acid, which converts it to H2O.  Being a much better leaving group than HO(-), H2O is rapidly lost from nitric acid to give the highly reactive “nitronium ion”, NO2+.

[note: the mechanism drawn above is a little oversimplified. Two equivalents of H2SO4 are usually best – protonate HNO3 twice (not once)  followed by loss of water, and then deprotonation of HNO2+. Click to see an image of the mechanism]

4. The Nitronium Ion (NO2+) Is The Key Electrophile In Aromatic Nitration

The nitronium ion is what really gets the job done here.

You might recall that this is just like what we saw with the halogens, where use of a Lewis acid in that case produced an activated electrophile that reacted much more quickly with benzene.

So what happens when the nitronium ion meets benzene?

In the first (and rate-determining) step of electrophilic aromatic substitution, the nitronium ion (NO2+) is attacked by a pair of pi electrons on the aromatic ring to give a carbocation intermediate, forming C–N and breaking C–C (pi) and N–O (pi).

The second step of electrophilic aromatic substitution, which is relatively fast, is an acid-base reaction. A weak base (such as water, or the HSO4– ion left after protonation of HNO3) removes a proton from carbon bearing the nitro group, breaking C–H and re-forming C–C pi. Aromaticity is restored.

The sulfonyl group, SO3H can also be added to an aromatic ring via electrophilic aromatic substitution.

In this case the electrophilic reagent is sulfur trioxide, SO3  (a gas) which can be introduced by bubbling through the solvent.  On its own, SO3 is not particularly reactive with aromatic rings, but as we’ve seen, addition of an acid can increase electrophilicity (and reaction rate) considerably. [see: The power of acid catalysis]

Like nitric acid, sulfur trioxide is “activated” by the addition of a proton from sulfuric acid. [Note: this combination of SO3 and H2SO4 is called “fuming sulfuric acid“, or “oleum” if you want to go for some really old school nomenclature.  ]

In the rate determining step, the highly electrophilic SO3H(+)  is then attacked by the aromatic ring to give the carbocation intermediate, forming C-S and breaking C-C (pi).

As with all electrophilic aromatic substitutions, the C-H bond is then deprotonated with a weak base to regenerate the C–C pi bond and restore aromaticity, providing the sulfonic acid product.

And… that’s really it for the key mechanisms of nitration and sulfonation.

If you start comparing reactions, you should see that the key mechanism of electrophilic aromatic substitution doesn’t really change except for the identity of the electrophile.

What really give each reaction its unique flavor is how the electrophile is activated, either by Lewis acid catalysis (chlorination, bromination) or Brønsted acid catalysis (nitration, sulfonation).

In the next post, we’ll cover the fifth and sixth of the six key electrophilic aromatic substitution reactions: Friedel-Crafts alkylation and Friedel-Crafts acylation, and how they are used to form new carbon-carbon bonds on aromatic rings.

[We’ll have more to say on this when we cover synthesis of aromatic molecules, but if you can’t wait… read on!]

Aromatic sulfonyl groups have a very interesting property.  If treated with a strong enough acid in the absence of SO3, the sulfonic acid group can be removed.

Let’s have a look at how this happens.

We’ve been so busy talking about different electrophiles (chlorine, bromine, nitronium, sulfonium…)  that we neglected to mention that H+ can act as an electrophile too.

We’ve ignored this because the reaction is so easily reversible – protonation of an aromatic ring is expected to be quickly followed by deprotonation back to the (stable, aromatic) starting material. It’s a cul-de-sac.

However, in the particular case of sulfonyl groups (and one other group, which I’ll mention in the next post) protonation of the ring can have important consequences, IF done in the absence of SO3.

First, let’s see what “protonation of the ring” looks like.

If the ring is protonated at the exact same carbon as that bearing the sulfonyl group [you likely don’t need to know this, but this is called the “ipso” carbon], we generate a carbocation intermediate.

Does the product look familiar? It should – it’s the exact same carbocation intermediate that is generated when benzene attacks protonated SO3, in “step 2” of sulfonation.

Most of the time, this intermediate will just be deprotonated to regenerate the aromatic sulfonic acid.

However, in the case of SO3H, there is another pathway to restore aromaticity that is not energetically available in the case of most other substituents. Instead of losing H, the intermediate can lose SO3H(+), which leads to the formation of benzene.

This is the reverse of electrophilic attack!

Now here’s where the “absence of SO3” part comes in. In the presence of a high concentration of SO3, benzene would just attack protonated SO3 again and re-form the sulfonic acid.

But if we just add acid in the absence of SO3, then this is less likely to occur. Furthermore, if we vent the reaction (say, by bubbling an inert gas like argon through the reaction mixture, which would eventually carry away any gaseous SO3 along with it), then gaseous SO3 will be slowly removed from the system. If you recall the principle of Le Châtelier, this means that our sulfonic acid is guaranteed to slowly revert back to benzene.

Well, this means that SO3H can be useful as a “blocking group” under some conditions. Again, we’ll have more to say on this when we get to synthetic strategy, but I’ll leave you with a challenge: how would you generate ortho-chloromethylbenzene from methylbenzene without any of the para- product?

Answer in the comments.

I am told that if nitroglycerin is neutralized with sodium bicarbonate, it is “reasonably” safe to work with, so long as you do not breathe it or get it on your skin. (reasonably safe still means, “don’t do it”).  Upon prolonged standing, nitroglycerin develops  a brown-red color, which is a sign that it is going “off”.  I don’t know, but I wonder if the detonation process of nitroglycerin starts with homolytic cleavage of the weak O-NO2 bond, to give the very nasty (and strongly colored)  •NO2 radical. This can abstract a hydrogen atom from nitroglycerin, and then – shabang! – homolytic cleavage everywhere.

Nitrogen tetroxide (which is in equilibrium with 2 moles of  •NO2) is a useful propellant in space probes and the like.

Note. Preparation of TNT, and structure of RDX. 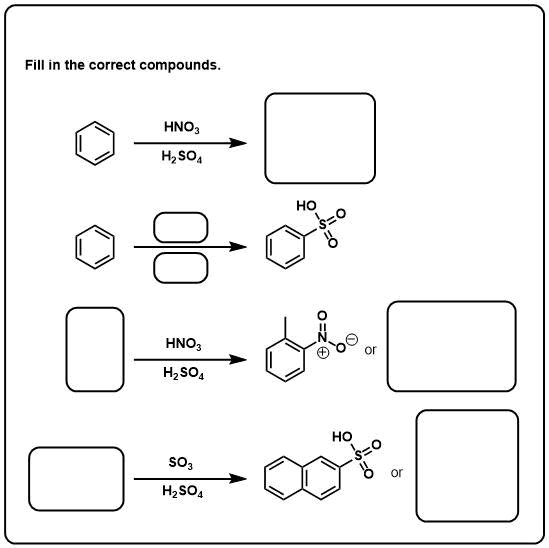 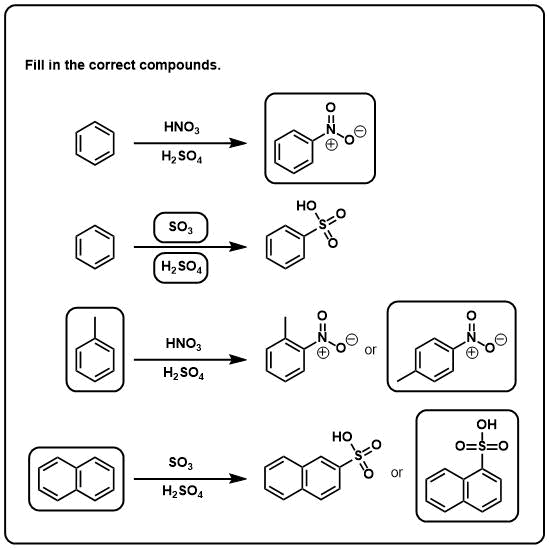 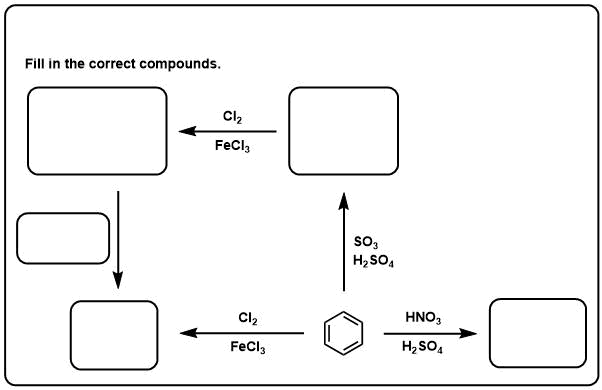 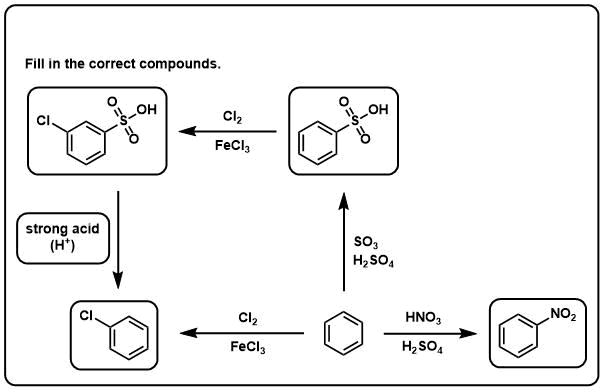 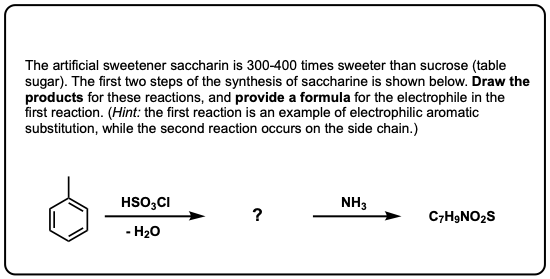 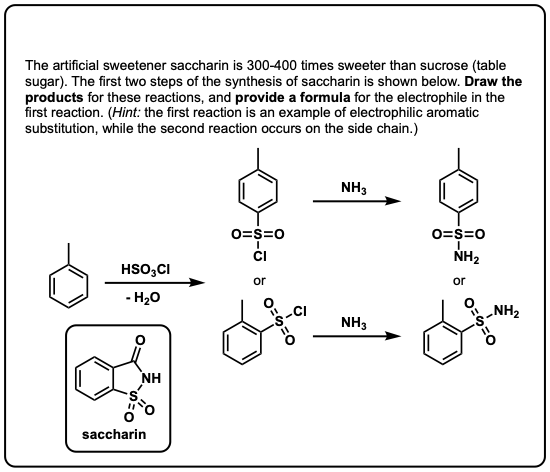 For more detailed references on these reactions, consult the sections in the reaction guide. The references here are highlights.