All About Allenes, Chiral and Otherwise

We’ve met alkenes before – right? Just in case you haven’t, let’s review the basics, because today’s post is going to depend on understanding a few of the most important concepts.

Alkenes like ethylene are flat [planar].  The p orbitals are at 90 degrees to this planar structure.

If you’ve ever used graphite lubricant, you might know it’s slippery because graphite is made up of layered sheets of flat, pi-bonded carbon, and the sheets have very little friction between each layer. Graphene is the same idea, only it’s a single layer.

Now let’s draw something weird. What do we get when we extend a second double bond directly adjacent to the first one?

Does this look strange to you? The first time you see this, you’ll probably think – yes! You might wonder – do these even exist? The answer is also – Yes! This moleule is called allene, and is part of a family of molecules called cumulenes, so named because the double bonds are cumulative (consecutive).

2. The Central Carbon In Allene Is sp Hybridized

It’s actually not quite that simple! The key is that central carbon – it has TWO π bonds.

You might recall that acetylene has two  π bonds as well, at 90 degrees to each other.

The same is true for allene, except that it’s only the central carbon that is involved in two pi bonds.

Here’s what the orbitals of this molecule  look like.

The hybridization of that central carbon? It’s sp, just like the carbons in acetylene. The end carbons are sp2

The line diagram of allene really does not do it justice.

So here I present a 3D “fly-by” of allene. Note how the two CH2 groups are “offset” with respect to each other by 90 degrees.

Allene is not flat! [those white balls – imagine they are hydrogen]

4. Substituted Allenes That Have Mirror Planes

Like so many things in organic chemistry, this simple fact leads to consequences that aren’t immediately apparent. Let’s pay attention to the mirror planes in this molecule. Note that there are two. 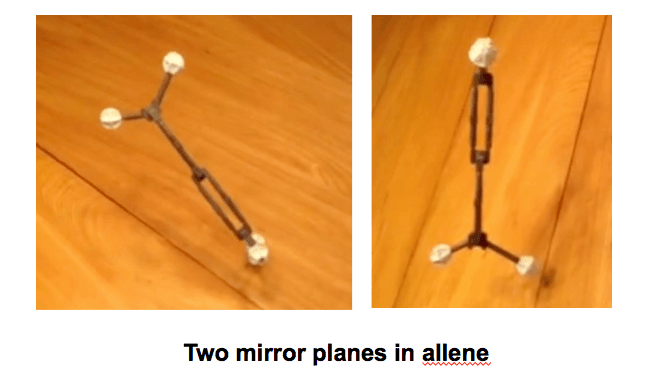 With two mirror planes this is definitely an achiral molecule.

Now let’s start playing around a bit. What happens if we replace one of the hydrogens by another group? In the drawing I’ve arbitrarily made this atom Cl but in practice it can be anything except H in this case.

Here’s a line drawing of  the molecule and a picture of its orbitals.

Now here’s what it looks like in 3D. Notice that we’ve lost one of the mirror planes! But it still has one, so it’s still achiral.

Now: what happens if we add a second group to the same carbon?

It’s still achiral!  – in fact, we’ve gone back to having two mirror planes. 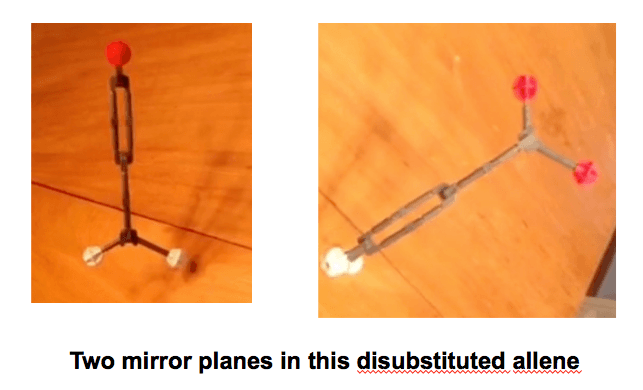 5. This Di-Substituted Allene Has No Mirror Plane – And is Therefore  Chiral!

Now I ask: where are the mirror planes?

THERE ARE NONE!  If there are no mirror planes —> then we are looking at a chiral molecule.

6. Chiral Allenes Have An “Axis Of Chirality”

Wait. You might ask -what trickery is this?  We have no chiral centres. Don’t we need something to have a chiral centre to be chiral?

Actually you are very familiar with a chiral object that has no chiral centre.

Have you ever screwed before?

No, no, no!  I mean, screwed using a screwdriver. This is a chemistry blog. Don’t expect anything lascivious here.

See, most screw threads are, to use a familiar mnemonic,  “righty tighty, lefty loosey.” You have to turn the screwdriver clockwise to screw it in, and counterclockwise  to loosen. Screws are chiral!

[By the way the enantiomer of that common screw thread would be… “lefty tighty, righty loosey” – those types of threads exist BTW – especially in gas barbecues, so as to prevent people from trying to connect things to them such as garden hoses or other idiotic things]. 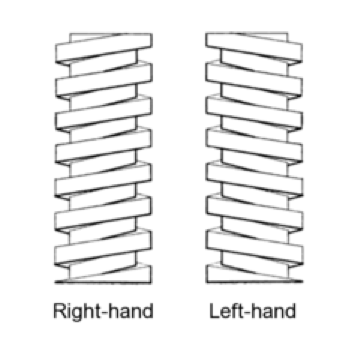 Instead of having a chiral centre, screws have what we refer to as a “chiral axis“. Other common examples of things with chiral axes: spiral staircases, snail shells and DNA.

Our disubstituted allene has a chiral axis – just like a screw.

What would the enantiomer of the allene look like?

Here is an enantiomeric pair of allenes. Can you see now how they are not superimposable? 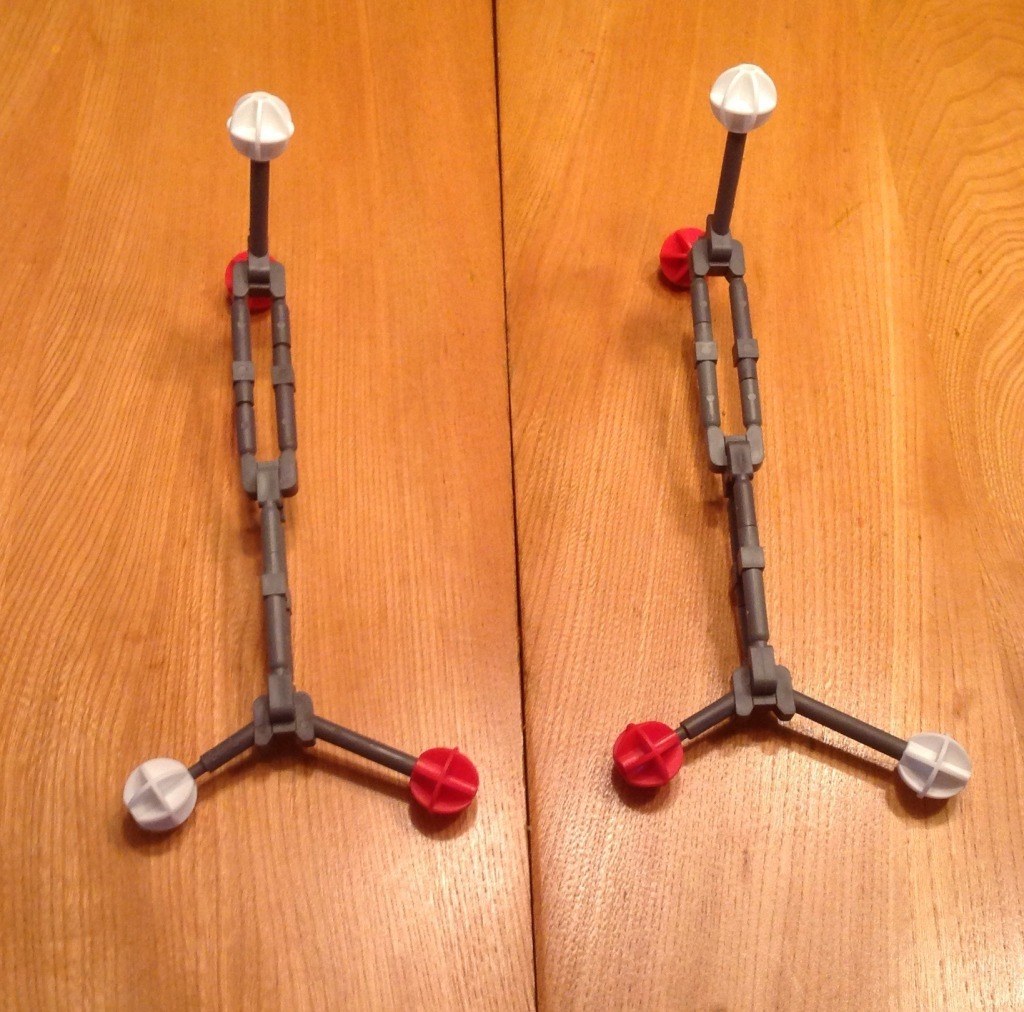 7.  Summary: How Do You Recognize A Chiral Allene As Opposed To An Achiral Allene?

You might ask, is there some kind of short cut for recognizing a chiral allene? Sure.

Examine both “ends” of the allene. If either of those ends is attached to two identical substituents, it is achiral  – because it will have a mirror plane.

If neither of the ends are attached to two identical substituents, then it is chiral.

Note 1. Bonus question: Would you expect this molecule to be chiral? Why or why not?

Note 2. Nerdy note about staircases, possibly a myth. This may or may not be true, but I recall reading a book in my childhood about castles where it was said that castles were built with staircases that forced someone ascending them [an attacker, presumably] to have their right (sword) hand on the inside and a descending defender to have their sword hand on the outside. The idea being that there is much more freedom of motion if your sword hand is on the outside because you have to swing it across your body.