Cycloalkanes: Two Key Consequences of The Fact That Hydrocarbons Can Form Rings

In the first few weeks of an organic chemistry class, we’ve learned that:

Nothing particularly strange about that so far. How about this:

In this first post on this series on cycloalkanes, we’ll discuss two key consequences of the fact that carbon can form rings, and then move forward with further posts in that vein.

1. Each Ring Decreases The Hydrogen Count By Two

One of the first consequences of the fact that carbon can form rings can be found by comparing the condensed molecular formulae of linear alkanes with cyclic alkanes.

Just by forming a ring, the number of hydrogens decreases by two!

And the tricyclic molecule follows the pattern #H = 2n –4 .

[Bonus Q – how many hydrogens would be in a tetracyclic molecule with 20 carbons (and no multiple bonds)? ]

Why does this matter? As you’ll see later, we’ll be able to use the fact that each ring decreases the hydrogen count of the molecule by 2 to help us deduce the structures of unknown compounds in some cases. It can be a small clue, but an important one nonetheless. [A look ahead – Degree of Unsaturation]

2. Cycloalkanes Of Less Than 8 Carbons Cannot Be Turned Inside-Out Without Breaking Carbon-Carbon Bonds

There’s a second interesting observation with cycloalkanes that we’ll talk about in much greater detail next time, but is important to get out of the way because it’s often overlooked. See how there’s that empty space in the middle of a cycloalkane ring? Many everyday household objects – belts, elastics, wristbands – can be easily turned inside out. Can we do the same with cycloalkanes? What happens when we try to turn them inside out?

Because it’s much easier to show this rather than tell it, I made a quick video.

The bottom line is that cycloalkanes of less than 8 carbons cannot be turned inside out without breaking carbon-carbon bonds.  >99% of the rings that you’ll see in Org 1 / Org 2 will fall into this category.

This has far-ranging consequences that we’ll talk about in the next post in this series, namely that it gives rise to “cis” and “trans” isomers that cannot be interconverted.

The fact that cycloalkanes form rings has all kinds of consequences that are hard to  foresee until you’re confronted with them.

One important rule in chess is that if a pawn makes its way to the end of the board, it can be promoted to a piece of the players choice.

99% of the time, the best choice is a Queen, but there are (very rare) situations where it is optimal to promote to a different piece – a knight, for example (see below). [link] 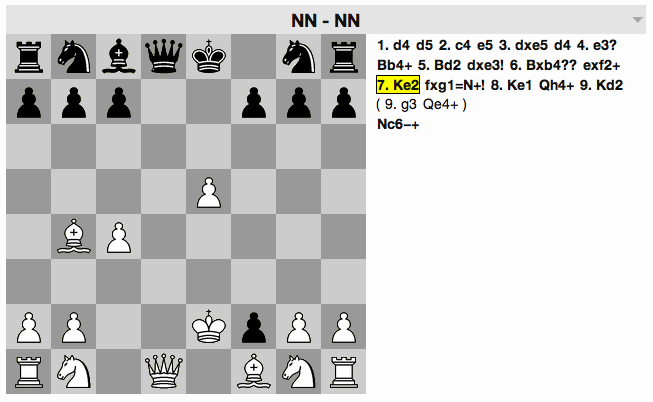 Cool, huh? An example like this one flows logically from the rules of the game, but you can’t really imagine situations like this one until you have a lot of board time under your belt.

1 thought on “Introduction to Cycloalkanes (1)”