“What!?” you may ask.  Yet another drawing convention? At this late stage of the course?

And isn’t drawing glucose just like drawing cyclohexane, more or less? Didn’t we learn how to draw cyclohexanes back in… Org 1?

Yes to all of those questions. It’s still important, however,  so read on.

The Haworth projection didn’t go away with the advent of the cyclohexane chair, however. Here’s why.

Let’s look at glucose. The most stable chair conformation of glucose has the C-2, C-3, and C-4 hydroxyl groups all on equatorial positions. [Note 1]  Of course, with organic chemistry fresh in your mind, you can tell which hydroxyl groups are up and which are down in the diagram below (right?):

But something often happens to people a few years after their last organic chemistry class: they start to forget the details of interpreting this whole cyclohexane chair business. Plus, conformational details are usually TMI to people who just want to look at the structure of a sugar and be able to clearly spot the differences in configuration.

[See, one of the slightly confusing aspects beginners encounter in learning cyclohexane chair conformations is getting used to the fact that “up” and “down” refers not merely to the axial groups on the chair (which indeed point “straight up” and “straight down”) but the equatorial groups as well – even though they only look like they are “somewhat up” or “somewhat down”.   [See: The Ups and Downs of Cyclohexanes]. The key point is that since five and six-membered rings can’t turn themselves inside-out without self-destruction,  no amount of conformational twisting (or chair flips) will convert, say, cis-1,2-dimethylcyclohexane to trans-1,2-dimethylcyclohexane, or for that matter, D-glucose to D-galactose; each group is locked on its particular face.]

A Haworth projection simply depicts a pyranose as a hexagon, and a furanose as a pentagon, and the substituent groups are placed straight up and down. Simple as that. [Note 2] By analogy with the Haworth, the oxygen is usually placed at the upper-right position with C-1 as the chair’s “foot-rest” for ease of comparison between sugars. [Note 3]

When a sugar is drawn in the Haworth projection, there is absolutely no question as to which groups are up or down, avoiding confusion for those who haven’t learned (or have forgotten) the details of cyclohexane chair conformations (cough-BIOCHEMISTS-cough) . Furthermore, there is no need to make a decision as to which chair conformation to draw. It’s standardized. Accurate depiction of the conformation is sacrificed for ease of interpretation of the configuration (i.e. the stereochemistry). For most applications in biochemistry, this is a good tradeoff.[Note 4]

Plus, it’s also effective for five-membered ring sugars (furanoses), such as ribose.

3. Converting a Pyranose Chair to a Haworth

Let’s say we wanted to convert a sugar drawn in a chair form to a Haworth projection. How would we do that?

The convention for drawing a pyranose in the chair form dictates that the ring oxygen is placed in the upper right hand position like that depicted below (the sugar in question is β-D-mannose, drawn in its pyranose form). The orientation of the chair is important: the “foot-rest” of the chair is on the right hand side, which is to say that the axial substituent on carbon 1 points down.

To convert a chair form to a Haworth projection, number the carbons 1 through 6 and then draw the Haworth template next to it, similarly numbered.

The next step is to identify which groups on the chair are “up” and which are “down”. Once this has been achieved,  map the up and down groups onto the appropriate up and down positions on the Haworth template.

With all the hydrogens in place, things can look crowded. It’s OK to make the hydrogens “implicit”,  which makes for a cleaner diagram:

[It’s extremely rare that you’d start with a sugar not in the “correct” chair form, but note that this works no matter what chair conformation you start with, as during a chair flip,  “up” groups remain “up”, and “down” groups remain “down”.]

Now, let’s do a furanose. β-D-ribose is drawn below. Use the same protocol of numbering and mapping, we can convert the “flat” form to the Haworth projection:

4. Converting a Haworth to a Pyranose Chair

Of course, we can also go in the opposite direction. The Haworth of  α-D-galactofuranose is drawn below. To convert it to a chair, we start by drawing in a chair template (foot-rest on right) with ring oxygen at back-right and number each carbon.

We then assign “up and down” to each of the substituents on the Haworth and map those on to our chair template:

The last step is to clean it up by making the hydrogens implicit, if desired.

In the next post, we’ll cover how to convert a cyclic Fischer projection to a Haworth projection, and vice versa.

Next Post: Converting  A Fischer Projection To A  Haworth

Note 2. What one might call the “classic” Haworth for a pyranose employs a full hexagon with equally spaced sides and the front three C-C bonds in bold.  The Haworth used in this post is based on a template in Chemdraw that elongates the horizontal lines and bolds the three frontal C-C bonds. Either is acceptable.

Note 3. The “chair” form of sugars which incorporates an emboldened front three bonds is known as a Reeves projection. Now you know. [Hat tip to Daniel E. Levy’s book, The Organic Chemistry of Sugars].

Note 4. We are going to completely avoid the subject of the conformations of sugars here. Levy’s book (partly available on Google Books) contains useful discussion. 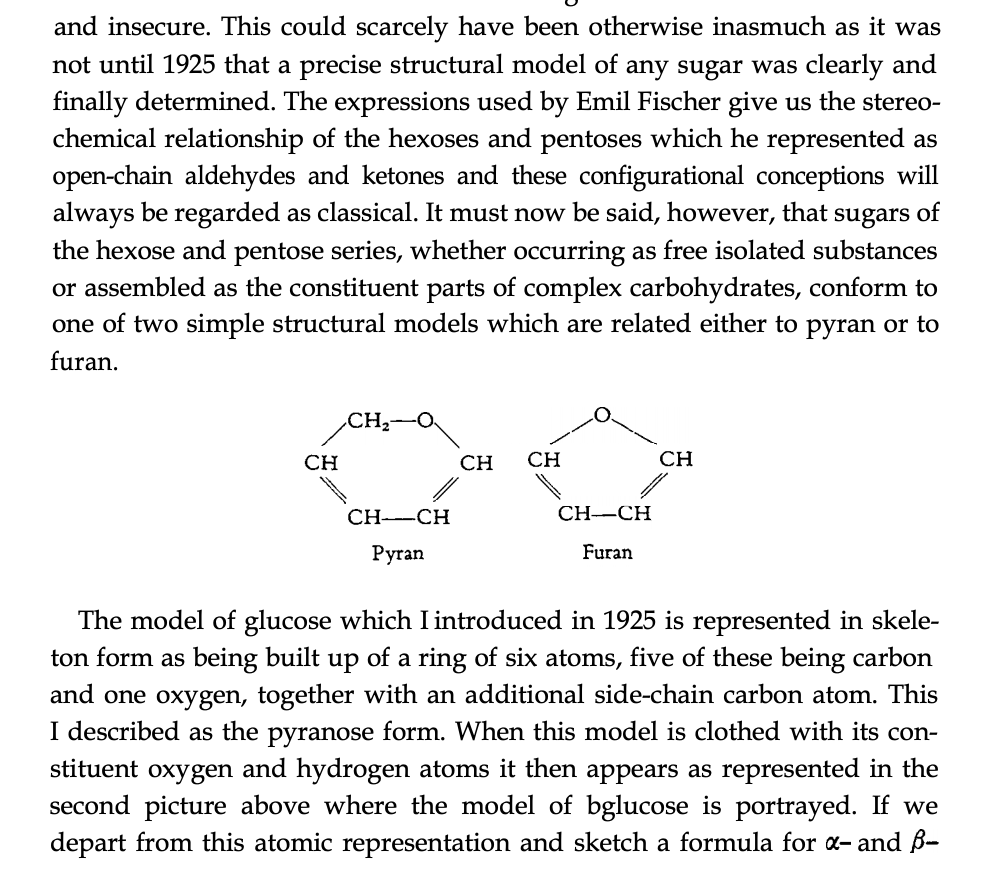 5 thoughts on “The Haworth Projection”