The Selectivity of Free-Radical Bromination vs Chlorination. A Detailed Answer

Wow!!! Is bromination ridiculously more selective than chlorination, or what?? (Again, if you want to know how this was calculated, go back to the last post.)

Today we’re going to try to answer, “why is bromine more selective than chlorine” ?  You might think that going from 4:1 to 97:1 will involve a huge difference in energies. But as we’ll see, it’s more subtle than you might expect. A few kcal/mol can make a huge difference!

1. The Selectivity-Generating Step Is Breakage Of The C–H Bond By A Halogen Radical  (Propagation Step #1)

The question that this post hopes to answer is  “Why is bromine more “selective” for the secondary carbon than chlorine?”.

It’s kind of a long answer. This post goes through the data and makes the scientific argument. In the next post I’ll put forward a simple analogy that simplifies this idea for many students.

The first thing to note is formation of the different chloropropanes happens during the chain propagation step (that is, after initiation). So for our purposes here we are only going to analyze the two propagation steps and assume that initiation has already occurred.  In other words, this step:

2. Background: Activation Energy And The Arrhenius Equation (Yes, This Is Relevant)

Before addressing the topic of selectivity directly, let’s first begin by talking about activation energy. You might recall that in order for a reaction to occur, the reactants must come into contact with each other with sufficient energy to overcome the repulsions between them (electron clouds). They also must collide in such a way that allows for transfer of electrons (aka “orbital overlap”)

In other words, the rate is equal to:

This is dealt with by the Arrhenius equation:

Here, the “probability they collide in the right way” is dealt with by the pre-exponential factor A and is unique for each reaction.  The exponential factor e-Ea/RT is what’s known as the “distribution function” and this is how we calculate the % of molecules in solution that have sufficient energy to react (heretofore known as the “activation energy”. )


3. Heat Increases The Average Velocity (And Energy) Of Molecules

Note the fact that this is temperature dependent. Why might that be? Well, as a collection of molecules is heated, the average speed of those molecules will increase. This is described by a related function known as the Boltzmann distribution, shown right here at three different temperatures [a=1, a=2, and a=5]. The y-axis shows the # of molecules (“distribution”) and the x-axis shows energy  [thank you Wikipedia] 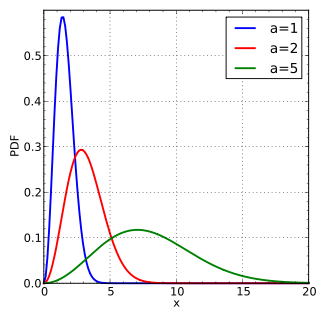 This shows the “distribution” (aka “number”) of molecules at specific energies. The hump in the middle is the “most probable” energy, and notice how it resembles a bell curve with tails at both ends. At the far right of the scale are the most energetic molecules. Note what happens when temperature is increased: on average, molecules have greater energy, and also the right-hand “tail” extends further out.

4. As A Reaction Mixture Is Heated, A Larger Proportion Of Molecules Will Have Sufficient Activation Energy (Ea) To React

Now imagine we have a reaction with activation energy Ea. At very cold temperatures, very few molecules have sufficient energy to react. But as the reaction mixture is heated, the proportion of those molecules increases. Ergo, the rate of the reaction increases with heat. Here is an example of how it works. Note how in this case below, the reaction doesn’t occur at 300K, but starts to occur at a reasonable rate at 330K!

Okay, that covers changing the reaction temperature. But what does this have to do with the selectivity of halogenation?

5. Selectivity For Bromination vs Chlorination Is Proportional To Differences In Activation Energy For The Key Step

Here, we’re keeping reaction temperature constant, but the activation energy for each reaction is slightly different.

We have four reactions in total to think about (two different halogens and two different C-H bonds).  The activation energy for each reaction has been experimentally measured [Ref 2] (and here, we’re talking about the activation of C-H bond breaking [i.e. propagation] not initiation.  Here’s what they look like.

This is actually all the information we need to be able to make a rough estimate of selectivities.
For a reaction at 300K,  we can calculate RT using the gas constant (1.987 cal/ K mol) and plug in the activation energy for each reaction. By dividing the two equations by each other, the pre-exponential factor A will roughly cancel out and we can obtain estimates for selectivities.
The bottom line here is that due to the nature of the Arrhenius equation, the greater the difference between activation energies, the larger the selectivity. The effects can be dramatic, even when going from a difference of 1kcal/mol (for chlorination) to 3 kcal/mol (for bromination of primary vs. secondary)

Just a bit of math using the Arrhenius equation, a rough calculation of selectivities based on differences  in activation energy.

All this is fine – it’s based on experimental data for activation energies. But it just opens up another question.

WHY is the difference for activation energies greater for bromination (3 kcal/mol) than for chlorination (1 kcal/mol). Great question!

7. So WHY Is The Difference For Activation Energies Greater  For Bromination Than For Chlorination?

Understanding this point begins with understanding the energy profile of these two different reactions (chlorination and bromination).

8. The Transition  State For Chlorination Resembles The Reactants (An “Early” Transition State) Which Are Close Together In Energy. So Selectivity Is Low.

9. The Transition  State For Bromination Resembles The Products (A “Late” Transition State) Which Are Farther Apart In Energy. So Selectivity Is High.

So the bottom line for today’s post is a few things:

In the next post I’ll use a simple analogy to drive home the point in a way that has helped students to understand this point on a more intuitive level.

Note 1.  Calculations for the energies of each reaction. Chlorination:

16 thoughts on “Selectivity in Free Radical Reactions: Bromination vs. Chlorination”