Sportswriter Todd Gallagher asked a question that every hockey fan has probably asked at one point. “Could a morbidly obese goaltender succeed in the NHL?”

As he relates in “Andy Roddick Beat Me With a Frying Pan“, he talked Washington Capitals owner Ted Leonisis into letting him run an experiment. He hired Trevor, a local college goaltender, to wear a 1000 pound fat suit, and then let NHL players take target practice. Quote:

Trevor’s goalie crouch was itself unnerving: butt on the ice and legs splayed out in front of him—really the only way someone that large could be situated. There were certainly places to score around his head and shoulders, but he filled most of the net and made it difficult to see the goal line. 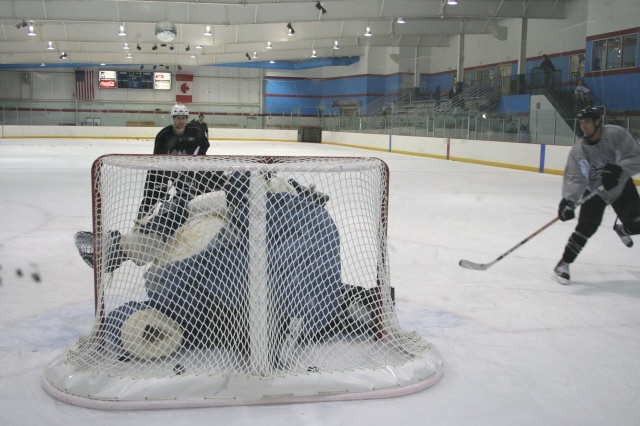 There is simply no way this reaction is going to happen:

Pretty much every reaction in organic chemistry boils down to “nucleophile attacks electrophile”.  In order for it to occur, the nucleophile (the lone pair on the CN) has to be able to reach the electrophile (the antibonding orbital of the C-Br bond).

If they can’t meet, it’s not going to happen. And it’s not going to happen because the three alkyl groups attached to the carbon block the approach of the nucleophile to the electrophile: instead of hitting the sigma star orbital (aka the antibonding orbital), the nucleophile electrons bump into the electron clouds around the alkyl groups.  In organic chemistry there’s a phrase for this: steric hindrance. We use this phrase to denote when a reaction is prevented from occurring because the nucleophile and electrophile bump into one another rather than reacting. Think of it as a puck deflecting harmlessly off a goalie’s pads.

I watched in horror as the Caps began to shoot, but Trevor blocked every single one of their first eleven shots, including a glove save he may not have even been aware of that drew cheers from the crowd. After one particularly brutal slapshot that ripped off the fat suit’s overalls, I checked on Trevor to see how he was doing. “My knee hurts and I can’t breathe.” Great, Trevor! Keep up the good work!

Steric hindrance is the big barrier for the SN2 reaction.* Remove it, and speed up the reaction. How do we do this? Make the carbon smaller. Remove alkyl groups and replace them with hydrogens. The rate of reaction drastically increases.

Just remember: the smaller the goalie, the greater will be the chances to score. 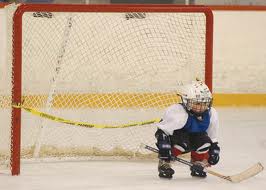 14 thoughts on “Steric Hindrance is Like a Fat Goalie”