1. A Quick Review Of What We’ve Learned So Far About UV-Vis

In our last post we showed that molecules with C-C pi (π) bonds absorb light in the UV-visible region, which promotes electrons from (bonding) π orbitals to (anti bonding) π* orbitals.

Because the post was so damn long, we never got around to addressing a key question: does this apply to other types of pi bonds as well?

For example, do C=O pi bonds also absorb light in the UV/visible region?

2. Absorbance of C=O bonds Show A Maximum Around 300 nm

Let’s start with one of the simplest compounds with a C=O bond: 2-propanone, otherwise known as acetone.

[The key piece of information to glean from that spectrum is that there is an absorbance maximum at about 275 nm, in the ultraviolet.] 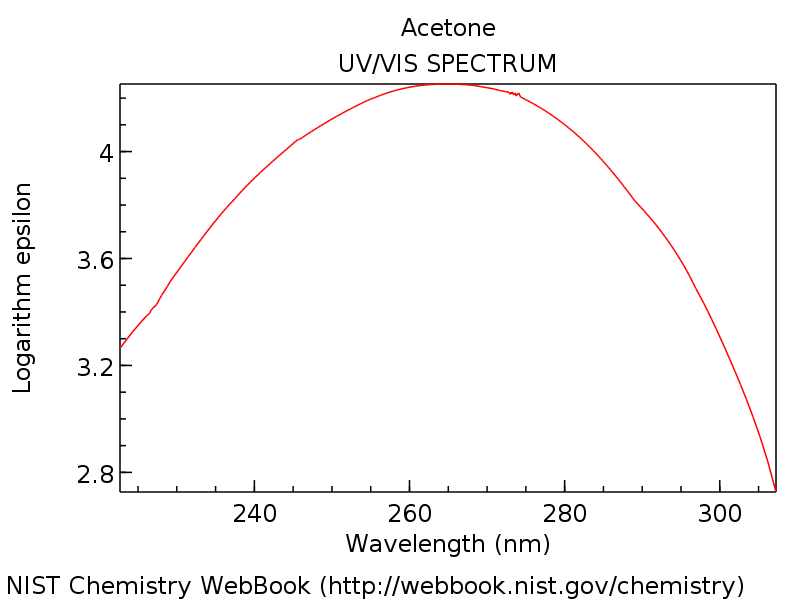 If you have an astonishingly good memory you may recall from the last post (or from my introduction above) that the absorption max for ethene (CH2=CH2) is about 170 nm.

An absorption around 275 nm means that longer wavelength and therefore less energetic photons are required for this transition.

If anything, C=O π bonds are stronger than C=C π bonds. [You can look it up]. Wouldn’t you reasonably expect *more* energy to be required to promote an electron from pi(π)  to pi* (π*)?

[This is a somewhat simplified picture. For a more detailed MO diagram for that also includes a more thorough discussion about the nature of the non-bonding orbitals, I highly recommend Reusch’s online textbook entry here. ]

A few important things to note:

4. What About Pi to Pi* Transitions for C=O?

So what about the pi to pi* transition? Doesn’t that happen too?

Glad you asked. If you take a quick look back at the UV-Vis absorption spectrum of acetone, above, you’ll note that the X-axis gets cut off around 240 nm or so. There’s a reason for that (mwah-ah-ah).

If you zoom out, you’ll see that there’s a much stronger transition around 190 nm. [I went looking for a decent full-size UV spectrum of acetone, and the diagram below is the best I could find. I didn’t make this image and it is not my intellectual property. I found it here. ] 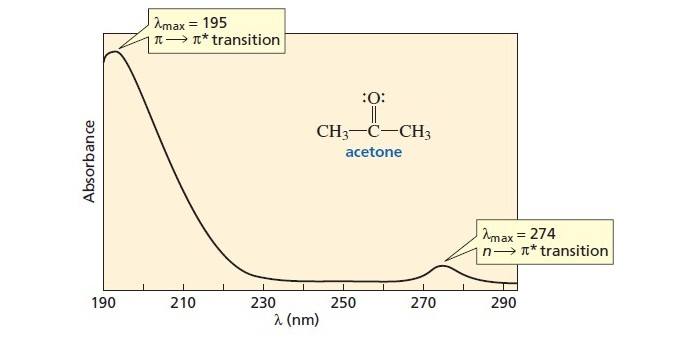 In other words, the (n→π*) transition at 275 nm that we’ve spent so much time talking about is very weak relative to the (π→π*) transition.  [sometimes a term called “epsilon, ε” is used to denote this difference in magnitude of absorption].

Why might that be? It has to do with differences in orbital overlap. In order for an electron to transition from one orbital to another, two conditions must be met.

Carbonyls can also participate in conjugation with C-C pi bonds. This leads to an increase in the overall λmax of the molecule.   For instance, the absorbance of the alkene 2-methyl pent-2-ene is below 200 nm, as is the π→π* absorbance of 4-methyl pentane-2-one (below).

In mesityl oxide, where the alkene and C=O group are in conjugation with each other, the absorption maximum moves to longer wavelength at 228 nm. This is similar to the difference between the absorbance of ethene (174 nm) and butadiene (217 nm).

Absorbance in the rough neighbourhood of 270-300 nm is common for molecules containing a C=O group (such as ketones and aldehydes) and this corresponds to a (n→π*) transition.

These absorbances tend to be weak, relative to (π→π*) transitions. Still, observing this absorbance can be an important clue in the structure determination of unknown compounds.

In the next post we’ll go into practical details of using UV-Vis in structure determination.

[Again, for a more in depth look on the subject of C=O absorbance, go to Reusch.  We’re really skimming the surface here, but it is enough for our purposes.]

Note 1.  It should be noted that non-bonding orbitals are present in species such as the allyl cation, allyl anion, and other ions of odd-numbered pi systems.

Note 2. For carbonyls, generally more polar solvents lead to higher  λmax values, as does the presence of substituents (such as methyl groups) on the alkene.

Since we’re on the subject, let’s briefly explore another system where both n→π* and π→π* transitions are observed: azo dyes.

Azo dyes are the kind of thing that you’ve likely seen a million times without specifically knowing what they are. 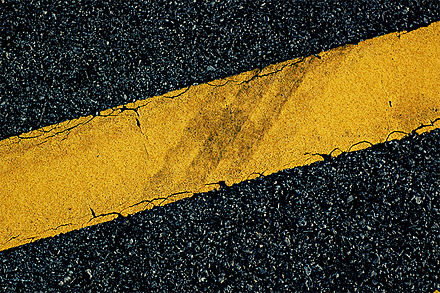 Azo dyes are commonly used in colouring textiles, plastics, and many other substances not intended for human consumption (they’re generally banned as food additives).

The key structural feature of an azo compound is a N=N linkage. One of the simplest azo compounds is azobenzene, where each nitrogen is connected to an aromatic ring. Slight modifications to the benzene ring can dramatically modify the color of the molecule.  Aniline Yellow, discovered in 1861, was the first azo compound to find commercial use as a dye, and countless derivatives of azobenzene have been synthesized since then. [The synthesis is via diazo coupling – we won’t get into that here].

Here’s the UV-Vis spectrum of Aniline Yellow, as calculated by ChemTube 3D.

What’s even more interesting about azobenzenes and their derivatives (e.g. Aniline Yellow) is the phenomenon of photoisomerization, where absorption of specific frequencies of light can lead to isomerization of trans isomers to cis isomers and vice-versa.

Pretty neat that you can target a specific isomer merely by changing the frequency of light.