The relative nucleophilicity of amines doesn’t get a  lot of coverage in many organic chemistry courses, but if we’re going to cover amines, it seems worthwhile to at least devote one post to their nucleophilicity trends.

Most of what follows shouldn’t come as a great surprise, as it will echo a lot of concepts and themes that have made previous appearances in the course (Org 1 in particular).

There are, however, a few interesting wrinkles which might help to put some of these concepts into a broader focus.

1. A Quick review: Basicity vs. Nucleophilicity

“Um, how are basicity and nucleophilicity different again“? you might ask.  Always a good question, because sometimes it takes approaching the subject from a few different angles to really make it sink in. Here, we’ll look at it from the perspective of amines, but a lot of the principles are general.

Since the electrophile can potentially be any atom on the periodic table (except for H, which would make nitrogen a “base”), there’s inherently a lot more variability possible for nucleophilicity than there is for basicity. Here, we’re going to confine ourselves largely to the reactions of amine bases with carbon-based electrophiles, since it’s the most relevant for our purposes.

3. Some Rules Of Thumb For Comparing Basicity and Nucleophilicity

The position of an equilibrium (“how stable are two reactants, relative to their products”) and the reaction rate (“how rapidly do two reactants combine to give a product?” ) are two very different measurements. To be sure, there’s a lot of correlation, but it’s just as important to know the situations where the correlations DON’T hold.

To put this in perspective, let’s tie it back to human relationships.

Does the fact that two people fall in love with each other make for a stable long-term marriage?

In fairy tales, the answer is, “of course”. It’s meant to be! What could go wrong?

In real life, the course of love does not always run smooth. That’s why we have tabloids and country songs.

Think of this sketch, which shows basicity increasing with nucleophilicity (note: this is not drawn to any reasonable scale)

Sometimes helpful to think of “basicity” as: “stability of the lone pair”. Anything which makes the lone pair more stable will decrease the basicity.

[Need a review on the factors which affect basicity? We covered  5 important basicity trends for amines here. Alternatively you can see this footnote, which covers the effect of conjugation, electron donating (and withdrawing) groups, and hybridization.]

So if basicity mostly correlates with nucleophilicity, you might ask: what are the exceptions?

There are three big exceptions to this rule of thumb: 1) strong bases, 2) bulky amines, and 3) a few highly nucleophilic but weakly basic nitrogens.

5. Exception #1: “Is This Too Basic For You?”  A Cautionary Note About Amide Bases

The conjugate bases of amines (“amide bases”) such as sodium amide (NaNH2) are extremely strong bases (pKaH about 35–38). If basicity correlates with nucleophilicity, one might expect them to also be great nucleophiles, way up in the right-hand corner of this chart.

In practice, using an amide base for an SN2 reaction is like trying to do surgery with a skill saw. The extra power doesn’t help very much, and there’s too much potential for collateral damage.

Neutral amines are already decent enough nucleophiles for most purposes (e.g. the SN2) and using an amide base doesn’t confer any great advantage.

The potential drawback in using amide bases as nucleophiles is that acid-base reactions tend to be fast, relative to reactions at carbon [Post: Acid Base Reactions Are Fast], and side reactions can occur.

For example, trying to do an SN2 on an alkyl halide may end up with some of the desired product, but it also has the potential to deliver the (undesired) elimination product as well. Too much basicity can be a detriment.

[This is similar to the reason why Grignard reagents aren’t often used in nucleophilic substitution reactions; they’re extremely strong bases, and other processes can get in the way. ]

Pro tip: a better substitute for using NaNH2 in a substitution reaction is to use highly nucleophilic but relatively non-basic sodium azide (NaN3) followed by reduction of the azide to the amine (e.g. with LiAlH4 ).

One way this comes up is that nucleophilicity is much more sensitive to steric effects than is acidity/basicity.

For example, t-butylamine is about as basic as other primary amines but is considerably less nucleophilic.

7. Why Is Nucleophilicity Is Much More Sensitive To Steric Effects Than Basicity?

Any additional groups attached to that carbon can further constrain the available angles by which the nucleophile can successfully approach the alkyl halide.

You can also compare it to the great experiment performed by sportswriter Todd Gallagher when the Washington Capitals repeatedly failed to score on a goalie wearing a fat suit. [See: Steric Hindrance Is Like A Fat Goalie]

Yes. See the top-left of this graph:

While not technically an amine, the poorly basic (pKaH = 4.7) but highly nucleophilic azide ion (N3 –) immediately comes to mind in this category. Besides being very small and therefore not subject to steric constraints, the azide ion is a “twofer”: each end of the nucleophile can potentially act as a nucleophile. (You can think of this as doubling its effective concentration.)

Two other prominent examples are hydrazine and hydroxylamine, which are both about as basic as ammonia, but are far more nucleophilic. [You may recall that hydrazine is used to cleave phthalimide in the Gabriel synthesis].

What makes these species particularly nucleophilic?

It’s not perfectly understood,  but essentially when a nucleophilic atom is bonded to an atom which also bears a lone pair, the nucleophilicity increases significantly [the energy of  the HOMO is increased]. This increase in nucleophilicity is called the “alpha-effect“.

For amines (and related species, like azides) the general trend is that nucleophilicity increases with basicity, with a few exceptions:

The usual caveats about nucleophiles apply too. For example, polar aprotic solvents are better than polar protic solvents for promoting SN2 reactions, since they don’t hydrogen-bond with the nucleophile (and thus surround it with a bulky shell of solvent).

If you’re OK with a relatively qualitative approach, great!

On the other hand, if you want a slightly more quantitative approach to nucleophilicity, read on.

An impressive body of work on the relative power of nucleophiles comes from the lab of Herbert Mayr, who for the past few decades has compiled various reactivity scales for a number of different nucleophiles and electrophiles. Given the large number of variables involved, no scale will ever perfect under all conditions, but the values obtained do give us a relative sense of the impact of various factors in the nucleophilicity of amines.

The Mayr numbers are useful as “ballpark” figures for determining order-of-magnitude electronic and steric effects, so long as the electrophile is not greatly sterically hindered.

Like pKa values, the Mayr nucleophilicity parameters are logarithmic.   In the case of the Mayr tables, the higher the number, the better the nucleophile.

We won’t go into the details of how these numbers are determined here, but for the curious there’s plenty of background on the website and in the associated papers.  Here is Mayr’s homepage database. Here is the the list of amine nucleophilicities that this part of the post is based on. Here is a handy-dandy presentation  discussing Mayr’s work.

Quantifying The Effect Of Solvent: Using Polar Aprotic Solvents Is Worth It

The answer appears to be by at least a factor of 100, if we compare the nucleophilicity parameters of ammonia  in water and acetonitrile. All else being equal, that’s the difference between waiting 15 minutes for your reaction to complete versus waiting a full day, just by choosing a different solvent. If time is money, what does that make polar aprotic solvents? 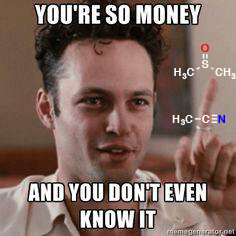 The Main Trend: Correlation of Basicity With Nucleophilicity

We mentioned that the nucleophilicity of amines proceeds in the order NH3 < primary amines < secondary amines, and correlated this with pKaH. The Mayr nucleophilicity parameters have the same broad trend.

This starts to put some perspective on the question of why the reaction of ammonia with alkyl halides is not a useful reaction for preparing primary amines; the product is 1000 times more nucleophilic!

Quantifying The Effect Of Steric Hindrance

We mentioned that steric hindrance reduces the nucleophilicity of amines. By how much?

So as a rough gauge, the t-butyl group reduces the nucleophilicity by a factor of about 1000 versus a “normal” primary amine.

The nucleophilicity parameter for the azide ion wasn’t measured in water, but if we can compare two different polar aprotic solvents (DMSO and acetonitrile) it’s about a billion times more nucleophilic than NH3.

Useful tidbit: never, ever use CH2Cl2 or chloroform as solvent for any reaction involving the azide ion.  The azide ion is so nucleophilic it will displace the chlorides, leading to the formation of a potentially explosive diazidomethane.

What About Tertiary Amines?

Conspicuously absent from this whole discussion has been the question of tertiary amines.

So are tertiary amines better or worse nucleophiles than secondary amines? Which factor “wins” ?

The Mayr nucleophilicity factors can help sort out this question.

It’s hard to see trends with water as a solvent because most tertiary amines are not very soluble in water.

In acetonitrile, it looks like tertiary amines are at least one, if not two orders of magnitude more nucleophilic than comparable secondary amines.

A particularly interesting example of a highly nucleophilic tertiary amine is quinuclidine, where the three alkyl groups are “tied back” in a bicyclic structure. The nucleophilicity paramter of quninuclidine in acetonitrile is 20.5, on par with the azide ion.

Note 1. All else being equal:

Note 2. In this post we’re mainly discussing nitrogen nucleophiles and carbon electrophiles, but when dealing more broadly on the subject of nucleophilicity the issue of orbital overlap between orbitals on different rows of the periodic table can arise. Sometime in the future we can address hard soft acid base (HSAB) theory.  On the other hand, at a lecture I saw Mayr give once on his reactivity tables, he was asked where hard and soft acid-base theory effects were in his data. His answer was, “I don’t know”, by which he meant, he thought his data doesn’t seem to support it.

24 thoughts on “Nucleophilicity of Amines”