Home / Bromination of Alkenes: The Mechanism

Bromination of Alkenes: The Mechanism

Bromination Of Alkenes: The Mechanism

How does bromination of alkenes work?

In the previous post (See Bromination of Alkenes ) we showed how the mechanism for bromination of alkenes can’t possibly go through a carbocation intermediate.

Why not? We have at least 3 good reasons:

None of those results are consistent with the reaction going through a planar carbocation.

There is one other detail to explain: when using water as a solvent, the reaction proceeds with “Markovnikov” regioselectivity. That is, the C-O bond is formed on the most substituted carbon of the alkene. (See post: Markovnikov’s Rule)

1. The Bromination Mechanism Proceeds Through A 3-Membered “Brominium Ion” Intermediate

Back in 1937, Roberts and Kimball [Ref] used similar observations to point out the deficiency of a free-carbocation mechanism proposed earlier by Robinson [Note 1]. They argued that a free carbocation would allow for rotation about the carbon-carbon bond, and that this was inconsistent with the products observed in this reaction.

Instead, they invoked the intermediacy of a 3-membered ring structure with a positive charge on the halogen, which is “isoelectronic” (i.e. has the same electronic configuration) as a member of the oxygen family [epoxides, for instance].  Importantly, they said:

“Since the two carbons in [the structure] are joined by a single bond and by a halogen bridge, free rotation is not to be expected”

Furthermore, this proposal also explains the stereochemistry of the reaction:

This second step, which may be the addition of either a halogen ion X- or some other atom or molecule, is probably a simple “three-atom” reaction… In this case the new atom will approach one of the carbon atoms from the side opposite to the X atom already present. A bond to this carbon will be formed while the bond from the original X to the carbon is broken, with simultaneous neutralization of the charge of the ion. This process will always lead to trans addition

The final issue – what we now call “regioselectivity” – was not specifically addressed in this paper, but makes sense when you consider that it is the carbons which are electrophiles in this structure, not bromine [despite the positive formal charge on bromine, recall that bromine is more electronegative than carbon!] and  the reaction will proceed at the carbon best able to stabilize positive charge.

So in this reaction, the alkene acts as a nucleophile, attacking the electrophilic bromine, giving rise to a 3-membered ring intermediate. This is then attacked from the back side [similar to the backside attack in the SN2 Mechanism] at the carbon best able to stabilize positive charge,  to give the trans product.

[Note that, like a flat coin that can land on “heads” or “tails” with equal likelihood, the bromine can “land” on either face of the alkene – this gives rise to enantiomers in this case].

2. When Water Or Alcohols Are The Solvent, “Marknovnikov” Regioselectivity Is Observed In The Formation of Bromohydrins

If we use a solvent which can potentially act as a nucleophile such as water or an alcohol, the intermediate halonium ion can be “trapped” by solvent, giving rise to “halohydrin” products in the case where the solvent is water. Again, note that the water molecule attacks the most substituted carbon:

Why the most substituted carbon? Because that’s the carbon best able to stabilize positive charge, and since it has the most partial positive character, it will also be the most electrophilic of the two carbons.

Alright – so this “halonium ion” proposal seems to explain these results well enough. It’s a nice idea.  But is there any hard evidence that has come to light since 1937 that helps us to know if they really exist?

As a matter of fact, yes: halonium ions have actually been observed in the wild! The halonium ion from the reaction below is particularly stable. [Think about it for a second – why might it be unusally stable? Note 2]

Furthermore, R.S. Brown and co-workers succeeded in using X-ray diffraction to obtain a crystal structure of this molecule. Here’s the iodonium ion portion of the structure: 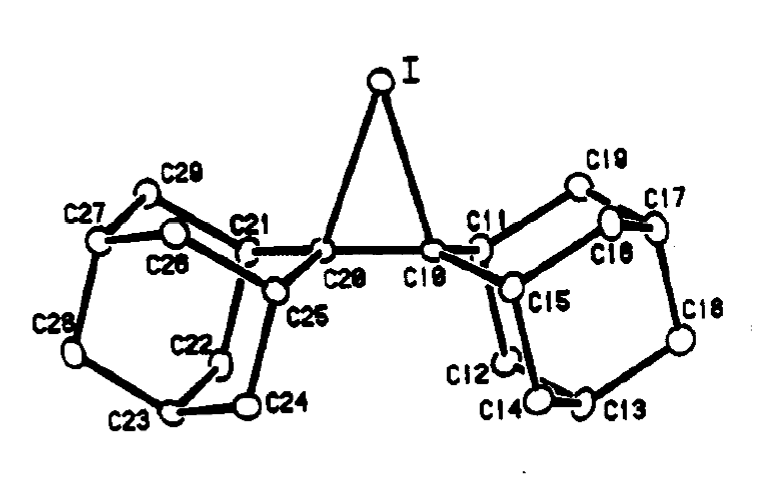 In chemistry, obtaining an X-ray crystal structure of a molecule is considered to be near-definite “proof” of its existence.  Although mechanisms can never be “proven”, this crystal structure represents about as close to a conclusive piece of evidence as you can get.

In the next post we’ll expand this idea of intermediate bridging ions to explain the results of a whole host of other reactions.

Note 1. 1952 Nobel Prize winner Robinson, (of Robinson Annulation fame), was a brilliant man, but he was wrong about the mechanism of this reaction according to a reference that I cannot obtain at the moment but is apparently referenced here [Ingold, Chem. Rev., 15, 225, 1934]  This is instructive: looking backward, it seems obvious that the halonium proposal is correct, but in science we move forward gazing through a foggy windshield.

Note 2. The extremely bulky “adamantyl” groups make the approach of any nucleophile on the backside of the halonium ion very difficult, which gives this halonium ion an unusually long life.

13 thoughts on “Bromination of Alkenes: The Mechanism”