The Strecker Synthesis of Amino Acids

The Strecker synthesis is a two-step procedure for the synthesis of amino acids. It begins with the addition of cyanide ion to an imine, forming an alpha-amino nitrile. This is then hydrolyzed (e.g. with strong acid) to give an alpha-amino acid. By varying the R group on the imine, a wide variety of amino acids may be made this way.

1. The Strecker Synthesis of Amino Acids

What’s not to love about the cyanide ion?

OK, OK, it’s a deadly poison, and should be treated extremely carefully in the lab.

But besides that, it’s an excellent nucleophile that can react with a wide variety of electrophiles, resulting in a new carbon-carbon bond terminating in a functional group (nitrile) that can be elaborated in many different ways.

Below are three examples of the cyanide ion in action.  When added to alkyl halides, it provides nitriles. It attacks ketones and aldehydes, giving cyanohydrins. And it also attacks the nitrogenous cousins of aldehydes and ketones, otherwise known as imines. This results in alpha-amino nitriles.

Now, perhaps “alpha amino nitriles” is not a name that easily rolls of the tongue.

As we said, nitriles can be transformed into a wide variety of species: amines (through reduction) ketones (through addition of a Grignard followed by hydrolysis), and most importantly for our purposes, carboxylic acids (through acidic hydrolysis).

So hydrolysis of an “alpha-amino nitrile” with aqueous acid should be expected to give an alpha-amino acid (or just “amino acid”, for short).

And indeed it does!

The procedure for making amino acids from aldehydes and ketones (via imines) is known as the Strecker Synthesis of amino acids.

Depending on the “R” group of the imine, a wide variety of amino acids can be synthesized using this method.

For example,  here’s a synthesis of phenylalanine, one of the 20 “proteinogenic” (i.e. protein-making) amino acids coded in messenger RNA (mRNA):

Given that most chemists are less than enthusiastic about working with cyanide gas,  [note]  a safer protocol utilizing the easily-handled solids NH4Cl (ammonium chloride) and KCN (potassium cyanide) is generally employed [note about NH4CN].  The idea here is that mildly acidic (pKa 9)  ammonium ion protonates the aldehyde, activating it towards attack with liberated NH3. After attack of NH3, proton transfer, and elimination of water, the cyanide ion then attacks the resultant imine (or, more likely, the conjugate acid of the imine, known as the “iminium”). This results in the alpha amino nitrile.

Addition of a water-absorbing salt (dessicant) such as MgSO4 often helps with formation of the imine, as it helps drive the equilibrium toward the imine.

2. The Two-Part Mechanism Of The Strecker Synthesis

The first part of the Strecker involves the formation of the alpha-amino nitrile, en route to the proteinogenic amino acid valine (commonly abbreviated as Val or V).f

The next step is hydrolysis of the nitrile with aqueous acid. Here it’s depicted as H3O+ with the counterion unspecified as X.

Protonation of the nitrile (note: the NH2 will be protonated as well under these conditions, but for clarity, it’s depicted as the neutral species) is followed by attack of water (step 2). Proton transfer to nitrogen (step 3)  followed by addition of water to the carbon (step 4), and another proton transfer to nitrogen (step 5) results in a positively charged ammonium, which is eliminated (step 6) as NH3. Deprotonation of the carbonyl oxygen (step 7) completes the process, giving valine as a racemic mixture of enantiomers.

You may ask: so what?

Proteins (e.g. from soy or whey) are readily available, and natural amino acids can be cheaply and easily isolated from hydrolysis of proteins. Since Nature provides them in such abundant supply, why bother making them?

Many reasons. Here’s one: the proteinogenic amino acids are often modified in various ways in vivo, and a method for accessing some of these rarer, modified amino acids becomes necessary.  One example is L-DOPA,  an important treatment for Parkinson’s disease (in the body it is transformed to dopamine and adrenaline).

In vivo, L-DOPA is made by hydroxylation of tyrosine, but organic chemists haven’t quite mastered how to perform that reaction  in the lab just yet. An alternative is to build up L-DOPA through a Strecker reaction. Starting with 3,4-dihydroxyphenylacetaldehyde (below) treatment with “NH4CN” (made from combining NH4Cl and KCN in solution) followed by acidic hydrolysis leads to a racemic mixture of L- and D- DOPA. Pure L-DOPA could then be obtained through a chiral resolution. (Note that DL-DOPA is the same as (+/–)-DOPA. Just a different way of depicting a racemic mixture.) [Note 3]

The Strecker can also be applied to build non-natural amino acids having unnatural stereochemistry, fluorescent tags, azides (for “click” chemistry applications), and many other properties.  This is not a “fringe” reaction. The Strecker is important.

So can the Strecker be modified so that it only produces predominantly one enantiomer?

The short answer is yes. One of the first applications of a chiral auxiliary (1963!) was in the Strecker reaction by the group of Harada. In the past few years, various catalytic asymmetric approaches have been developed, which are beyond the scope of our discussion. I refer you to the work of Jacobsen and  Song for further reading.

Ironically the problem of making enantiomerically pure L-DOPA was solved not through the Strecker, but through catalytic hydrogenation, developed by Knowles and his group at DuPont in the 1970s. This won a share of the 2001 Nobel Prize for Chemistry, for asymmetric catalysis.

[1] This 1941 paper recommends smoking in the lab ( a common enough habit in days of yore)when working with HCN, as it gives cigarette smoke a characteristic taste. 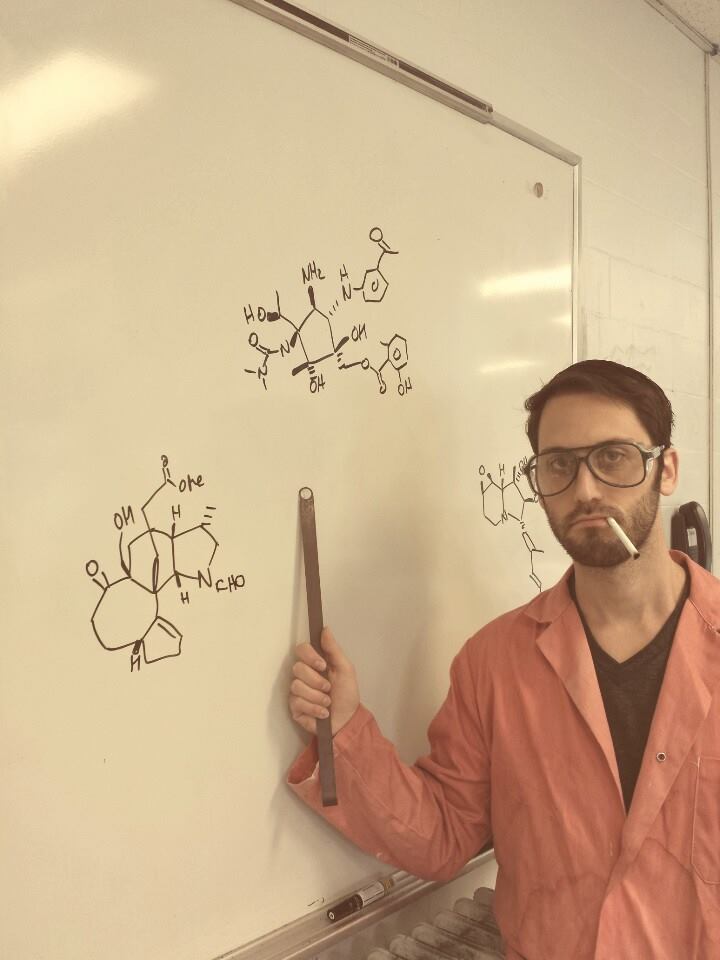 [2] Instead of using NH4Cl and KCN, it might seem more efficient to use NH4CN. Alas, NH4CN is not a stable solid, and has the unfortunate property of giving off HCN gas. The solution to this is to make it in situ with NH4Cl and KCN.

[3] If you’ve covered carbohydrate chemistry, you might recognize that the Strecker is a close cousin of the Kiliani-Fischer method for chain extension of sugars. It’s the same idea!

This is a very simple but powerful reaction, which takes three components: an aldehyde/ketone, cyanide, and an amine. The product is an a-aminonitrile, which can be hydrolyzed to amino acids.

4 thoughts on “The Strecker Synthesis of Amino Acids”