Home / How Do We Know Methane (CH4) Is Tetrahedral?

How Do We Know Methane (CH4) Is Tetrahedral?

What Do The Valence Electrons Of Carbon Tell Us About The Bonding In CH4?

(Hint: since the dipole moment of CH4 is zero, the answer is, “not enough”)

If the orbital  configuration  of carbon is 2s22p2 , then how can we use this information to figure out what the arrangement of the orbitals are in a simple organic molecule like methane (CH4)?

It turns out that methane is tetrahedral, with 4 equal bond  angles of 109.5° and 4 equal bond lengths, and no dipole moment.

This brings up two questions. First, how do we know that CH4 is tetrahedral? And secondly, how do  we reconcile this  electronic configuration (2s22p2 ) with the fact that we have four equal C–H bonds?

1. The Electronic Configuration Of The Valence Electrons Of Carbon Is 2s22p2

In our review of atomic orbitals, we saw that the orbital configuration of the valence electrons of carbon is 2s22p2 as shown below:

Since the 2s orbital is lower in energy than 2p, it’s filled first. That means that there are two electrons in the 2s orbital, and a single electron in two of the three 2p orbitals. There’s also an empty 2p orbital.

[In addition, there are two electrons in the “inner shell” 1s orbital, which are not available for bonding].

2. Can We Use This Information To Figure Out The Structure Of Methane (CH4)? (Spoiler: No)

So far so good. This is fine if we’re just talking about isolated carbon atoms.

But in order to be truly useful, we need to be able to relate the orbitals of carbon to the structure and bonding of actual organic compounds.

The simplest organic compound is methane, CH4. So let’s bring four hydrogen atoms into the picture and try to apply what we’ve learned to come up with some hypotheses about the bonding in this molecule.

The 3 p-orbitals in carbon are all at 90 degrees to each other, along the x, y, and z axes.

Shouldn’t we expect that the structure of methane would have three C-H bonds for each of the p orbitals (at 90 degrees to each other) and then the fourth C-H bond attached to the 2s orbital? Since electron pairs repel, maybe we should put that C-H bond the maximum distance away from the other C-H bonds; this would give an H–C–H bond angle of 135°.

Following this logic would give a structure like this:

As it turns out, it can be shown that this proposal is wrong.

Recall that each C–H bond has a small dipole due to the difference in electronegativity between C (2.5) and H (2.2). We expect C to be partially negative and H to be partially positive.

However, the measured dipole moment of CH4 is zero. Therefore this cannot be the correct structure.

This tells us that all the bond lengths and bond angles in methane are identical.

Alright, you say. If all C-H bonds are of equal lengths and angles, why can’t CH4 have the structure below, where all the bond angles are 90° and CH4 is flat, in the plane of the page. (We call this structure “square planar”).

This was in fact the majority opinion for the arrangement of bonds around carbon until about 1880. Extremely brilliant chemists such as Berzelius went to their graves having no reason to doubt that methane was anything but flat.

However, we now know this to be wrong. Why?

4. Disproving The Square Planar Structure Of CH4 (1874) And Proposal Of A Tetrahedral Structure

If methane is modified so that the central carbon is attached to four different groups, the molecule can exist as 2 different isomers that are non-superimposable mirror images (this is called “optical isomerism” and covered later in the course).

This is possible if the arrangement of 4 groups around the central carbon is tetrahedral, but not if the molecule is square planar. For example, the methane derivative bromochlorofluoromethane has four different groups around carbon and can be separated into two different isomers which rotate plane-polarized light in different directions. [As we’ll see later, these isomers are called “enantiomers”]

This  observation rules out the square planar structure. If carbon was square planar, the molecule would be flat, and be superimposable on its own mirror image, and only one isomer would be possible.

Jacobus Henricus van’t Hoff , a fellow at the veterinary college in Utrecht, was among the first to address the possibility of three-dimensional carbon. In his “La Chimie dans L’Espace” (1874) he noted that the arrangement of atoms in space has important practical consequences – a point that had been completely neglected to that point. van’t Hoff showed that a tetrahedral arrangement of four different groups around a carbon atom (which he called an “asymmetric carbon”) would give rise to two different isomers, and furthermore, this would explain why tartaric acid (with two asymmetric carbon atoms) existed in three forms (+, –, and meso).   [Source]

van’t Hoff’s work – which should be noted was purely theoretical –  was not well received in some circles.

5. Tetrahedral Carbons: Not A Popular Idea In 1874

The eminent German chemist Hermann Kolbe had this to say:

For his part, van’t Hoff flew to Stockholm on his Pegasus to receive the first Nobel Prize in Chemistry in 1901. [Note 2] 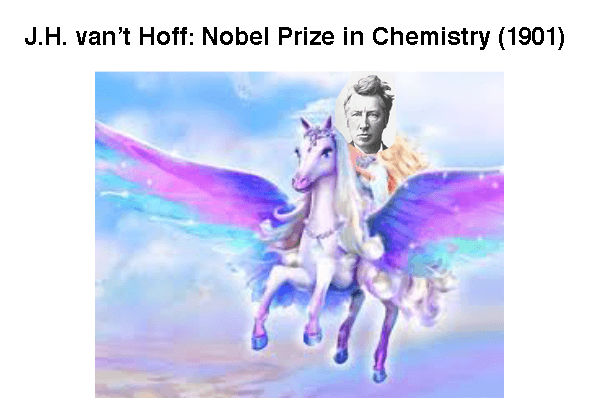 Incontrovertible proof for the tetrahedral arrangement of bonds around the carbon atom came in 1913 when Bragg determined the structure of diamond using X-ray crystallography and found it to be a tetrahedral network of carbon atoms with C-C-C bond angles of 109.5°.

6. So What Orbitals ARE Involved?

We now rationalize the tetrahedral arrangement of atoms around methane as being due to the repulsion of the bonding pairs of electrons with each other (a.k.a. VSEPR theory).

This doesn’t help us with understanding the orbitals involved in bonding, however.

If we accept that the arrangement of hydrogens around methane is tetrahedral, then how do we describe the bonding orbitals of methane, given what we know about the geometry of s and p orbitals?

Furthermore, how do we account that each of the 4 bonds in methane are of identical lengths? What happened to the 2s orbital, for example?

Are the electrons in the C-H bonds considered to be in p orbitals or s orbitals? Or something else?

As it turns out,  the conventional treatment is to deal with the bonds around carbon as being in hybrid orbitals.

Note 1. Note that mono-deuterated methane (CH3D, where D is deuterium, the heavy isotope of hydrogen) has a small dipole moment that has been measured. [ref]

Note 2: it should be noted that van’t Hoff’s Nobel Prize was for his contributions to physical chemistry, not organic stereochemistry.

I am indebted to this page covering van’t Hoff’s “The Arrangement of Atoms In Space” for historical perspective. Well worth reading in full.

From the same source: van’t Hoff’s tetrahedral models [from the Leiden history of science museum; source] 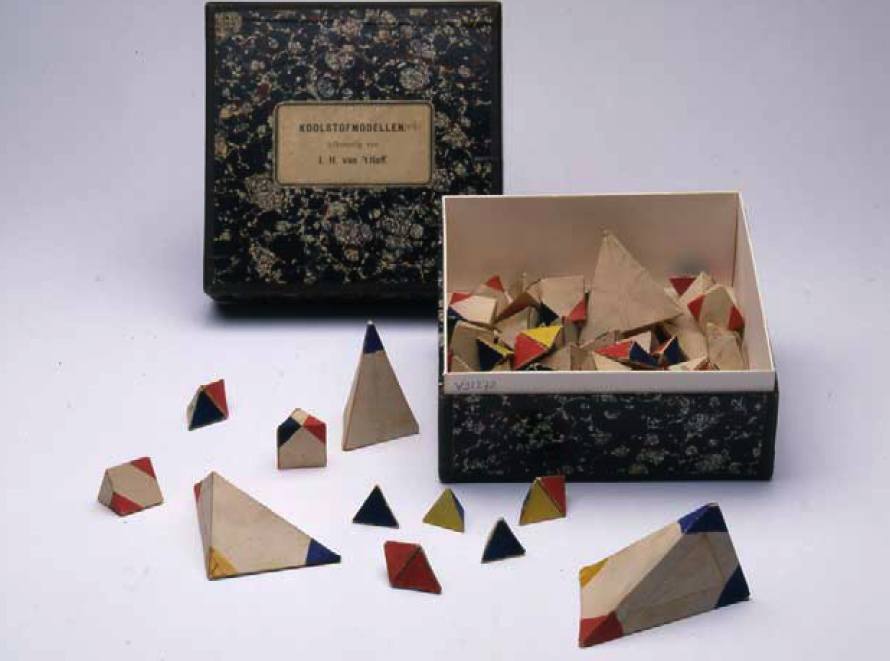 From the same author, some more historical perspective on the Kolbe/van’t Hoff spat:

Obviously Kolbe was silly to be so intemperate and spiteful. He was also short-sighted, and he guessed wrong. We can easily appreciate that in the court of history he got what was coming to him.

The challenge is properly to respect the indispensable contributions the attitude he was championing had made to the development of chemistry. It was by sticking close to careful experimental observations that chemistry had gotten where it was (and is). Kolbe was trying to keep science on a productive, intellectually justifiable path.

5 thoughts on “How Do We Know Methane (CH4) Is Tetrahedral?”