Home / The Principle of Least Effort

The Principle of Least Effort

It’s a common misconception that the sciences are impersonal and somehow “less human” than, well, the “humanities”. I beg to differ. Is there any trait more fundamentally human than the desire to avoid unnecessary work?  The desire to shave a mere five seconds off a ten-minute walk can burn a footpath through a garden. And as you’ve probably seen at the beginning of an organic chemistry course, it is responsible for the progression of chemical structures from Lewis diagrams (very effort-intensive) to line structures and even condensed formulas.  Like kids who cut across a field on their walk home from school instead of walking the perimeter, organic chemists have arrived at short cuts for drawing chemical formulae. There’s no way around it: you gotta learn this. 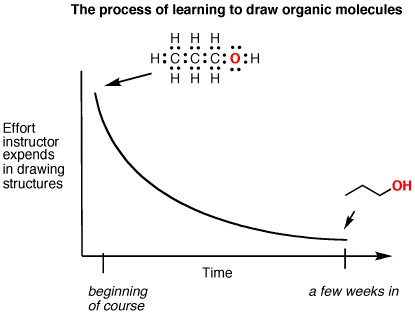 So what’s the driving force behind all of this anyway? Well, drawing lines is fast. Drawing atoms, charges, and dots (lone pairs) is slow. So when we can get away with not drawing atoms, charges, and dots, we will try to do so. Because we want to expend as little effort as possible. One of the greatest achievements of organic chemistry was to develop a convention whereby someone can draw a straight line on a chalkboard and say to the audience with a straight face, “Clearly, this is ethane”. Pure genius. 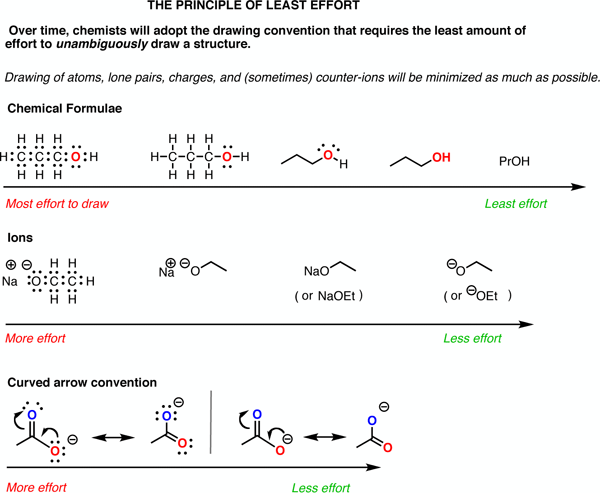 Note that condensed formulae are not always as simple as “PrOH”, but in this case it works well. Secondly, although I’m personally not a fan of omitting the identity of counterions (sodium in this case), it’s done often enough to bear watching out for.

The convention for curved arrows bears repeating. If there is at least one electron pair on an atom as well as a charge, it’s OK to draw just the charge and show the tail of the arrow as coming from that point. By convention, we know that the negative charge stands in for a lone pair here. It’s less work to draw. (One word of warning: if there is no negative on the atom, you must draw the electron pair. Laziness has its limits.)

I bring this up because a student asked me a question the other day that bore repeating to a larger audience. Here it is: 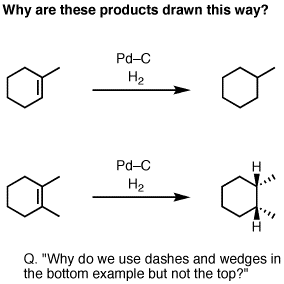 Great question.We can also apply the Principle of Least Effort here.  Dashes and arrows are also extra work to draw. Look at these structures, for the example on top:

The example on the left (with dashes and wedges) is slower to draw than the example on the right, and furthermore, in doing so, no information is lost.  There is no ambiguity. Therefore the structure that takes the least effort to draw, “wins”.

What about the bottom example?  If you’ve studied the hydrogenation reaction, you should know that both hydrogens are delivered to the same side of the double bond (i.e. “syn addition”), producing the cis product in this case. Here we run into a problem. The structure with no dashes/wedges could denote either the cis or the trans form. Therefore we must introduce dashes and wedges to remove ambiguity and demonstrate clearly that the reaction delivers only the cis product.  In other words, we draw structures as simply as we can, but no simpler. Note that although we could draw in both the dashes for the methyl groups and wedges for the hydrogens, we really only have to draw dashes or wedges here: drawing the methyl groups with dashes implies that the attached (“hidden”) hydrogens are wedges. It’s less work that way! [Note 1]

How to know “when” to draw dashes and wedges

Dashes and wedges are essentially never used on compounds that lack a stereocenter. It’s not “wrong” to draw them, but it’s extra effort that serves no purpose. So we usually just draw flat lines, like this:

However if two or more stereocenters are present, there is a possibility of diastereomers. In these cases dashes and wedges are drawn in, to prevent ambiguity. Watch out, though – this does not necessarily imply that they are present as a single enantiomer however. (As Charlie Munger might say, “you wouldn’t want it to be too easy, now would you” )

If this all seems confusing, with lots of practice it will start to make sense. No doubt you will just be expected to learn all of this by osmosis. Hopefully this serves as a useful guide to the things that most instructors (and Ph.D’s like myself) have long taken for granted. Just remember: that chemists are just as human as everybody else: we want to do the minimum amount of work for the task that we can get away with.

[Note 1] –  the choice of drawing the CH3 groups as dashes was arbitrary. They could alternatively been drawn as wedges. Hopefully you can see that it’s the same molecule either way.

4 thoughts on “The Principle of Least Effort”