What Is The Definition of An Organometallic Compound?

Quick summary for today – the first in a new series on organometallic compounds:

Previously on MOC we’ve discussed how important dipoles are in determining the reactivity of a molecule.

Wait: dipoles, you might ask. How do we determine a dipole again?

Let’s start this series by making sure we’re clear on this, because it will be key to understanding the class of molecules we call “organometallics”.

1. Some Background On Dipoles [skip to organometallics, dammit]

Recall that molecules are built of covalent bonds between atoms, but the electrons in covalent bonds aren’t always shared equally between atoms. In particular, when two atoms of significantly different electronegativity form a covalent bond, the atom with higher electronegativity (“greedier” for electrons, if you’ll pardon the anthropomorphism) will have an unequal share of those electrons, leading to a partial buildup of negative charge on that atom (which we represent by using the symbol δ– ). Conversely, the atom with the lower negativity will have a partial deficit of electron density, leading to a partial positive charge (δ+).

The most likely place to find a large dipole is to look for strongly electronegative atoms such as oxygen (3.5) and nitrogen (3.0) or the halogens fluoride (4.0), chlorine (3.2) and bromine (3.0): if any of those atoms is bound to a less electronegative atom like carbon (2.6) or hydrogen (2.2), a dipole results.

An analogy: the other day I was doing laundry, and these complimentary pieces of velcro ended up getting stuck to each other. This is a perfect example of a non-covalent attractive interaction. 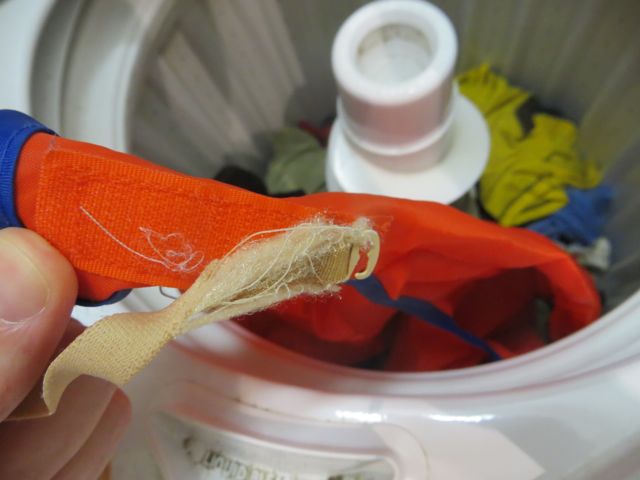 Another feature of dipoles, less often mentioned, is that they provide us with excellent hypotheses for determining where reactions might happen between two given molecules.

If you’ve started to cover even the simplest of reactions, you’ve already learned that bonds are formed when a Lewis base (electron rich) donates a pair of electrons to a Lewis acid (electron poor).

When the electron pair is being donated to any atom except hydrogen, we usually call that Lewis base a “nucleophile” [when a lone pair is being donated to hydrogen, we tend to call it a “base”]. Since atomic nuclei are positively charged, “nucleophile” is shorthand for  “positive-charge loving”. Nothing new here: atoms which are (δ– ) are attracted to atoms which are (δ+).

On the other hand, since Lewis acids tend to be electron poor (δ+, negative-charge-loving) and they are attracted to electrons [or to be more specific, atoms with high electron density (δ– ) ], we often call Lewis acids “electrophiles”.

This diagram tries to show some interactions between potential nucleophiles and electrophiles based solely on dipoles. Note that this doesn’t mean that reactions between these atoms will necessarily occur – it’s only saying that these are good guesses for where the “action” will be.

3. Examples With Reactions [skip to organometallics]

Just to illustrate, here are some examples of real reactions  you see in Org 1 (or sometimes Org 2) which follow this pattern. Note how the source of electrons (the tail of the blue arrow – the nucleophile) is always the negative end of a dipole, and the electron acceptor (the head of the blue arrow – the electrophile) always the positive end of a dipole. Nucleophile attacks electrophile.

There’s one trick – see that last example? The boron bears a negative formal charge (BH4–) but the hydrogen acts as a nucleophile. What’s going on there?

Here, the trick is to see that hydrogen actually has a higher electronegativity (2.2) than boron (2.0) and therefore in the B-H bond, it’s the hydrogen which is  δ– . Always pay attention to the dipole more than the formal charge, because formal charge can lie.

4. Organometallics Are Molecules That Contain a Carbon-Metal Bond

All of this should be review. However, like a dog who needs to walk around their pillow before they finally lie down, sometimes teachers need to get the introduction out of the way before getting deep into a topic.

Do you notice that in all of these cases, carbon is electropositive [electron poor]? We see carbon as an electrophile so often in introductory organic chemistry, it’s important to realize that carbon can act as a nucleophile as well.

If carbon tends to be electrophilic when attached to a more electronegative group, then under what circumstances might carbon act as a nucleophile?

When it’s attached to a less electronegative atom! After all, carbon is slightly upper-middle class when it comes to electronegativity (2.6). There’s a lot of other elements on the periodic table with lower electronegativities than that. Many of them are metals of some variety, whether they be alkali metals, alkaline earth metals, or transition metals. Even group 13 elements (the old group III) – boron, aluminum and so on – qualify as metals for these purposes.

Molecules that contain a carbon-metal bond are referred to as organometallics.

The common theme in organometallic chemistry is that carbon tends to act as a nucleophile (or a base, if there are Brønsted acids around).

We’ll get to some examples of reactions in subsequent posts, but first, let’s just see some examples of what organometallic compounds look like. Three of them are extremely common in introductory organic chemistry. Organolithium compounds, organomagnesium compounds (which go by the name “Grignard reagents” after their discoverer), and organocuprate reagents (again, usually referred to as “Gilman” reagents after the chemist who first popularized them, Henry Gilman of Iowa State University).

In the next post, we’ll show some examples of how these organometallic compounds are made.

P.S. This series will only go into the most superficial aspects of organometallic compounds and their reactions. For much more thorough treatment, I strongly encourage you to visit The Organometallic Reader by Mike Evans, a free online resource that teaches the essentials of this very deep subject.

6 thoughts on “What’s An Organometallic?”