Conjugation And Color (+ How Bleach Works)

Why are tomatoes red? Why are carrots orange? Why are egg yolks yellow?   And… why is Vulcan blood green? 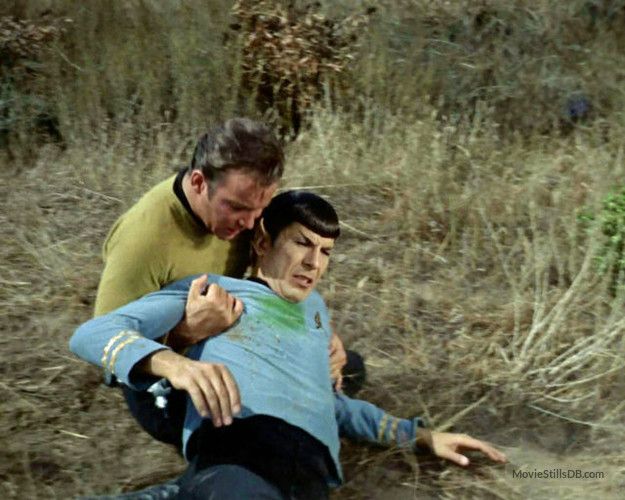 OK, I’m not going to touch that last one, but as for the first three: great question.

There are actually 15 chemical causes of color, but today we’ll begin to explore the reason for the characteristic colors of tomatoes, egg yolks, carrots, and many other pigments from nature, such as the green color of leaves and the red color of blood (heme). And yes, there is a spectroscopy angle here – but that’s going to wait until the next post.

Before getting into the “why”, I always like to look at the “what”. Specifically, here are some examples of highly coloured molecules from everyday life. Do you notice something that all of these molecules have in common? 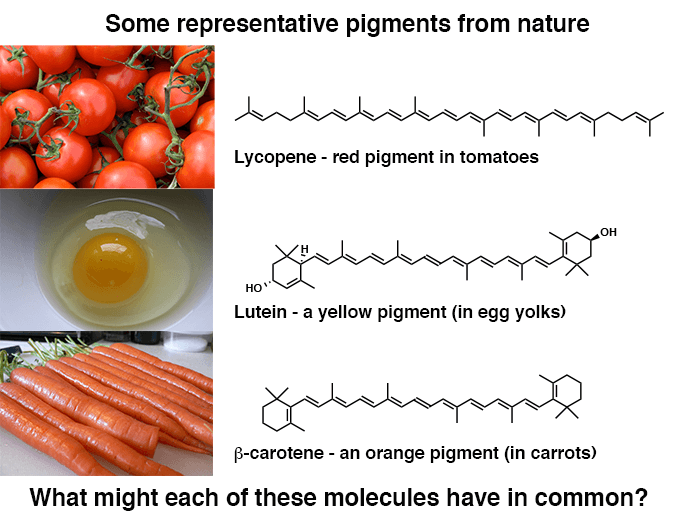 For instance, natural rubber latex can have hundreds or thousands of pi bonds, and yet it is milky white [Note 1]: 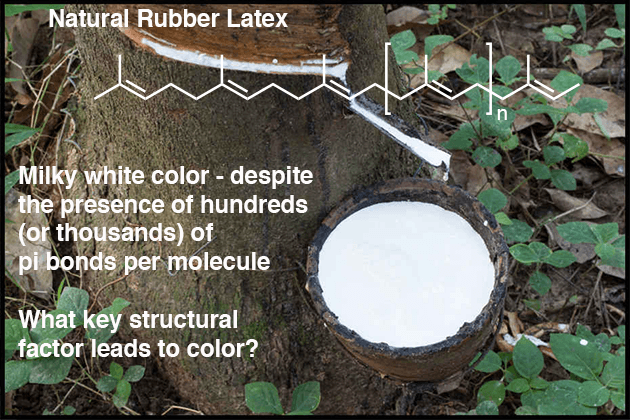 1. These Highly Colored Molecules Have Many Conjugated Pi Bonds

What does that mean? [See: Are these alkenes conjugated?].

Let’s revisit lycopene, lutein, and β-carotene. They each have long systems of conjugated pi bonds.

This is also true of chlorophyll and heme, which are more complex examples but the same principles apply.

Let’s start with a hypothesis: color is due to the presence of an extended series of conjugated double bonds.

How could we test this idea?

One way would be to perform an experiment that removed the π bonds while leaving the rest of the molecule intact.

We’ve seen multiple examples of these reactions in our section on alkenes. A great candidate is catalytic hydrogenation, which breaks C-C π bonds and forms adjacent C-H bonds by using hydrogen gas (H2) in the presence of a metal catalyst (such as palladium on carbon, Pd/C).

Indeed, when one subjects red lycopene (C40H56) to exhaustive catalytic hydrogenation, one obtains perhhydrolycopene (aka “lycopane”) with formula C40H82 – a colourless oil.

Does this seem too abstract? Do we need a real life application?

Damn that lycopene! How can we get those nasty stains out of our clothes using our new-found chemistry knowledge?

Here’s an idea I’m giving away for free:

Since you now know that lycopene is responsible for the red color of ketchup, and catalytic hydrogenation removes the color, you could make a home device for catalytic hydrogenation of shirts at high pressure and get rid of the stain. Since every household could use one, and there are about 100 million households in the USA, you could sell each unit  for several hundred dollars apiece, and before you know it, you’ll be buying a top hat and a monocle.

Or… you could just use this. 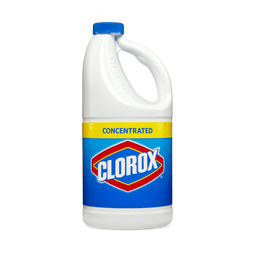 That’s right: Bleach removes the color of grass, ketchup, blood, carrots, and a lot of other common food and vegetable stains by reacting with the π bonds responsible for the color of these molecules.

Bleach (sodium hypochlorite, NaOCl) reacts with alkenes in a similar way to a reagent we’ve seen before, Cl2 in H2O. When you examine the structure of NaOCl, notice that Cl is attached to the more electronegative atom O. That means that chlorine bears a partial positive charge – it’s electrophilic. Thus, NaOCl will react with nucleophiles like alkenes in a similar way to Cl2 or Br2, forming a bridging intermediate through the three membered ring pathway.  The 3-membered ring bridge is then attacked at the most substituted carbon by the nucleophilic solvent (water in this case).

Let’s apply this specifically to lycopene (and by extension other molecules).

Bleach works by knocking out the pi bonds responsible for the red color of lycopene:

I should point out that it isn’t necessary for bleach to hit every pi bond. Knocking out just a few in that sequence of 11 conjugated pi bonds is enough to remove the red color.

So there you go, folks. Now you know that bleach doesn’t actually clean anything. It just modifies the molecules so that they aren’t coloured anymore. : – )

4. Conjugation And Color: How Exactly Are They Related?

So far, we’ve explained nothing truly fundamental about the source of color. All we’ve done is show a bunch of pretty pictures, a bad GIF, and explained the workings of a household chemical. So let’s get down to business and start answering the “Why”.

We see ripe tomatoes as red because white light is reflected back to our eyes as red light. So some portion of the visible spectrum is being absorbed by lycopene: we see the light it doesn’t absorb.

So if we see something as red, how can we figure out what wavelengths of light are being absorbed?

For simple cases, it’s been known for hundreds of years that when light of a certain color is absorbed, the complimentary color is observed. A common tool for determining this is a color wheel, which places complimentary colors on opposite sides.  Here’s one made by the German poet (and amateur scientist) Johann Wolfgang von Goethe. 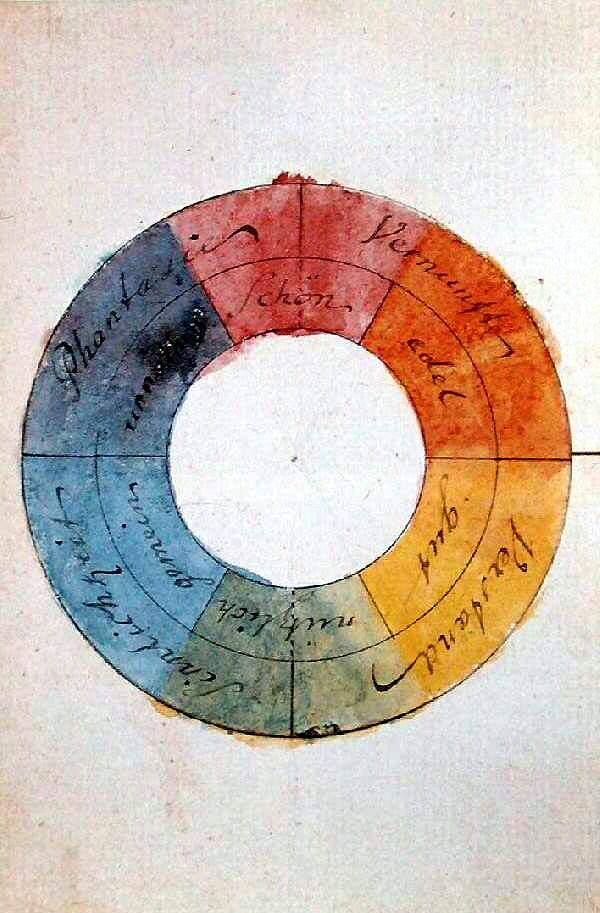 So what do all those conjugated pi bonds have to do with lycopene absorbing green light?

Excellent question. Now we’re getting into some deep stuff. This is a great topic!  But it will have to wait until the next post for a full treatment.

The latex rubber example is a little bit of apples and oranges. The white color is common for any latex/emulsion and it arise from the physical structure of the dispersion – the emulsion particles scatter all light. A better comparison would be a dried latex, but they are typically light yellow due to impurities.

9 thoughts on “Conjugation And Color (+ How Bleach Works)”