On Cats, Part 1: Conformations and Configurations

[NOTE: this has been amended to correct some confusion on my part on the difference between configurational and constitutional isocats. Thanks to Prof. Gary Weisman (UNH) for making me aware of the error]

As I said earlier, I’ve given up writing about organic chemistry. If you’re expecting to read a post about concepts in organic chemistry you’ve come to the wrong place. This post, dear reader, is 100% about cats: cat science in particular. I just want to make that clear.

Behold: a cat in my neighborhood.

Beyond the fact that the markings are the same, we know intuitively that cats can move their limbs around – they have a certain freedom of movement.

Depending on what they’re doing at the time, whether sleeping or scratching or looking out across the street, they’ll move their limbs to adopt different orientations.

Look at this kitty: on the left, sleeping. On the right, standing on two legs. 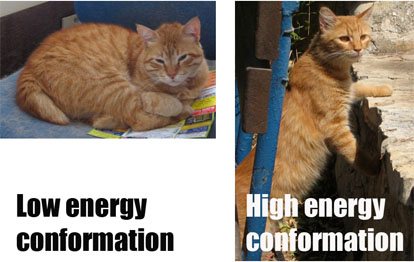 Same kitty, but what’s different? In my first foray into cat science, I’ll argue that the difference is comfort. This is the same cat, but the shapes have different comfort levels due to the impact of gravity (among other things).  The orientation on the left is more comfortable, hence lower energy, and the orientation on the right is less comfortable, hence higher energy.

Let’s give these shapes a name. Since we’re talking about comfort, here, I dunno – let’s call them, say, “conformations”.

Conformations: the different shapes a cat can make by moving its limbs around, achieving different levels of comfort.

Here’s two more pictures of cats in my neighborhood. 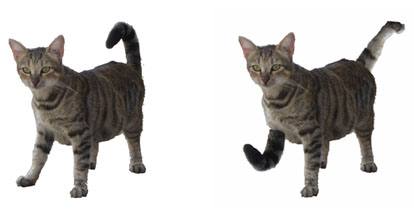 Now is THIS the same cat? No way – kitty on the left is normal whereas the one on the right looks like it paid a visit to the Island of Dr. Moreau.

Unlike conformations, which can be interconverted by movement of the limbs, here the connectivity is different. The leg and tail are switched. No matter how they move, they cannot interconvert. The limbs are in a different configuration.

However, they *are* similar. If we did some (very morbid) major surgery but if we just switched the leg and the tail back, we’d clearly obtain the same cat. In other words, their constitutents – that is to say, their limbs – are the same, but arranged in different orders. Let’s go out on a limb and call them constitutional isocats.

Constitutional isocats: Cats that have the same constituents, but differ in the order in which they are connected.

By switching around the limbs on a given cat, we obtain different configurations. 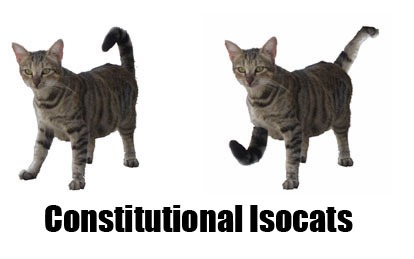 So in a nutshell: conformations can interconvert, but configurations can’t be interconverted without breaking off body parts and moving them around.

Horseshit. This is 100% cat content here people! This is a cat blog.

In our next foray into cat science, we’ll break new ground by doing a more thorough analysis of feline conformations.

38 thoughts on “On Cats, Part 1: Conformations and Configurations”