E and Z Notation For Alkenes

Earlier on our MOC series on cycloalkanes, we saw that a key feature of small rings is that they can’t be turned “inside out” without breaking bonds.(See post: Cycloalkanes – Dashes and Wedges)

One of the most important consequence of this is that it can lead to the existence of stereoisomers – molecules which share the same molecular formula and the same connectivity but have a different arrangement of atoms in space.

These two versions of  1,2 dichlorocyclopentane (below) are an example. They have the same connectivity – both are 1,2-dichlorocyclopentane –  but have different arrangements of their atoms in space. The chlorines are on the same side of the ring in the left-hand isomer (both “wedges”, coming out of the page)  and on the opposite sides  (one wedged, one dashed) on the right-hand isomer.

These two molecules cannot be interconverted through rotation  of the C-C bond without rupturing the ring (use a model kit and try, if you like). They are therefore isomers.

Molecules which have the same connectivity but different arrangement in space are known as stereoisomers.

Specifically, the relationship between the two molecules above is that of diastereomers: stereoisomers which are not mirror images of each other. (See post: Types of Isomers)

[Just to note, the other subclass of stereoisomer is “enantiomers”. We apply this to two stereoisomers which are (non-superimposable) mirror images of each other. Also: keep in mind that the terms “diastereomer” and “enantiomer” denote comparative relationships, like the terms “brother” or “cousin”. ]

1. When Do We Use cis- And trans- Notation In Rings?

We use the terms cis- and trans–  to denote the relative configuration of two groups to each other in situations where there is restricted rotation.

[Side note: the “restricted rotation” is how cis- and trans- subtly differs from  syn and anti, which we use in cases where there is free rotation, such as the orientation of methyl groups in “eclipsed” and “staggered” butane. Bottom line: syn and anti forms can generally be interconverted through bond rotation: cis and trans forms cannot. ]

In nomenclature,  “cis” is used to distinguish the isomer where two identical groups (e.g. the two chlorines in 1,2-dichlorocyclopentane) are pointing in the same direction from the plane of the ring, and trans to distinguish the isomer where they point in opposite directions. [You might also hear organic chemists say, “the chlorines are cis to each other” or “the hydrogens are trans to one another”.]

In order for cis- trans- isomerism to exist in rings, we need two conditions:

In 1,2-dichlorocyclopentane we saw that C-1 and C-2 each had non-identical substituents (H and Cl) above and below the ring, and they each had at least one substituent in common (in fact they have two substituents in common:  H and Cl ).

Here’s another example: cis- and trans– 1-ethyl-2-methylcyclobutane. Note that they each have two carbons which each bear non-identical substituents above and below the ring (H and CH3; H and CH2CH3). They also have at least one substituent in common (H). So we can refer to cis-1-ethyl-2-methylcyclohexane as the isomer where the two hydrogens are pointing in the same direction, and trans where they point in opposite directions.

If you’ve covered chirality, you might also note an interesting fact: there are two ways to draw each of the cis- and trans– isomers, and they can’t be superimposed on each other. These are enantiomers, by the way. (See post: Enantiomers, Diastereomers or the Same)

Because cis– and trans– is relative, it doesn’t work if the two carbons don’t share a common substituent. In that case you also have to use (R)/(S) .

We’re taking too long to go through rings here, so let’s just illustrate 2 examples where “cis” and trans” doesn’t work in rings and leave it there.

cis-trans isomerism  is also possible for alkenes.  As in small rings, rotation about pi bonds is also constrained: due to the “side-on” overlap of pi bonds, one can’t rotate a pi bond without breaking it. This stands in contrast to conventional sigma bonds (single bonds) in acyclic molecules, where free rotation is possible: witness 1,2-dichloroethane (below left).

We can also use the cis–trans nomenclature to distinguish isomers such as 2-methyl-3-hexene (above right). In the cis isomer, the two hydrogens are on the same side of the pi bond, and in the trans isomer, the two hydrogens are on the opposite side of the bond. [Note: this risks a “tsk-tsk” with accompanying finger-wag from IUPAC , but it nevertheless gets the right structure: see the Note 1 below for a digression as to why]

As with rings, the minimum requirement for cis-trans isomerism in alkenes is that each carbon is bonded to two different groups, and that the two carbons have at least one substituent in common.

As with rings, cis-trans isomerism isn’t possible if one of the carbons of the double bond is attached to two identical groups, as with 1,1-dibromo-1-propene, below. Try it for yourself if you’re not convinced.

3. Watch Out For Ambiguous Names Where Cis/Trans Isomerism Is Possible

A quick digression: one consequence of our newfound appreciation of geometrical isomerism is that many simple-sounding molecule names  are actually ambiguous.

For instance, the descriptor “3-hexene” does not unambiguously describe a specific molecule.  [The same is true for 2-butene: try it! ]. To nail down the specific molecule,  we need to specify cis– or trans– 3-hexene.

Note that 1-hexene is still OK, since the 1-position of 1-hexene is attached to two identical groups (hydrogens) and thus no cis–trans isomers are possible.

cis- and trans can also be applied to alkenes in rings. For example, on paper it’s possible to draw cis– and trans– cyclohexene, since the pi bond fulfills the requirements for cis- trans- isomerism. In reality, trans-cyclohexene is impossibly strained. Try kissing yourself on the tailbone. That will give you some idea of the strain involved in trying to accommodate a trans– double bond in  a six membered ring .  [Note 2]

For this reason, for ring sizes 7 and below, it’s safe to ignore writing “cis” : the configuration is assumed.

At ring sizes of 8 and above, we do need to put a cis– or trans- in the name, because the trans– isomer becomes feasible. (Imagine trying to kiss yourself on the tailbone if you had the neck of a giraffe: suddenly not impossible!)

We saw that cis and trans fails in rings when the two carbons lacked a common substituent. It also fails for alkenes under these circumstances.

Case in point: try to apply cis and trans to the alkene below:

In the absence of two identical groups, we have no reference point!

On the left, the chlorine is cis to Br and trans to F. But does that really justify calling the isomer “cis” ? How do we decide?

What we need is some way to determine priorities in these situations.

[note: some textbooks may still refer to this alkene as exhibiting “cis-trans isomerism” even though we must use E and Z]

6. The E and Z Notation For Alkenes

Thankfully, we can apply the ranking system developed by Cahn, Ingold, and Prelog for chiral centers (as touched on in this earlier post on (R)/(S) nomenclature) for this purpose.

The protocol is as follows:

So Z resembles “cis” and E resembles “trans”  .  (Note:  they are not necessarily the same and do not always correlate: see Note 2 for an example of a cis alkene which is E . The E/Z system is comprehensive for all alkenes capable of geometric isomerism, including the cis/trans alkene examples above. We often use cis/trans for convenience, but E/Z is the “official”, IUPAC approved way to name alkene stereoisomers].

One easy way to remember Z is to say “Zee Zame Zide” in a German accent. My way of doing it was pretending that the Z stands for “zis”. Whatever works for you.

As with chiral centers, ranking according to atomic number can result in ties if we restrict ourselves merely to the atoms directly attached to the pi bonds.

7. Breaking Ties: The Method of Dots

For instance, the alkene below presents us with a dilemma: one of the carbons of the alkene is attached to two carbon atoms. So how do we determine priorities in this case. How do we break ties?

In the case of ties, we must apply the method of dots.  Dots are handy placeholders which is why I like to use this method.

Here’s a practical example of the “method of dots”.

Here’s a more complex example with multiple alkenes. In this case each pi bond is designated by a number with its own separate E or Z configuration.

OK, this was long. But hopefully useful.

Watch out for a future post in which we go into more detail on the “method of dots”.

cis-trans-  is OK for describing simple alkene stereoisomers, but only works in certain cases. Furthermore,  it only gives relative configurations.  The E/Z system is comprehensive and describes the absolute configuration of the molecule.

Just a reminder: this post was co-authored by Matt Pierce of Organic Chemistry Solutions.  Ask Matt about scheduling an online tutoring session here. 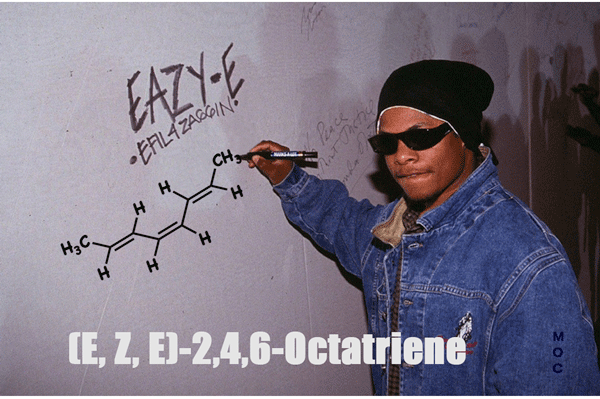 Note 1: It’s possible to have an alkene we’d describe as ‘cis’ be E and vice versa.

Note 2: trans-cyclopropene, trans-cyclobutene, and trans-cyclopentene have never been synthesized or observed. trans-cyclohexene is a laboratory curiosity, stable at a few degrees above absolute zero. trans-cycloheptene has an extremely short half-life at room temperature. trans-cyclooctene is a stable molecule [it also exhibits axial chirality, which is interesting! ].