The Organic Chemistry Of… Doe Urine?

That’s right. The organic chemistry of doe urine is awesome!

1. That Time My Car Got Rear Ended And I Found A Bottle Of Deer Urine In The Trunk Of My Rental Car

A few months ago my mom came down to visit, and we had a fun lunch at my favourite aquarium restaurant.  On our drive home, we got on the highway in the rain and turned a corner only to be confronted with a sea of red brake lights. Stomping on the brake,  I barely managed to stop in time. However, the car behind me did not. The meaning of “crumple zone” was quickly apparent – and this car wasn’t even going that fast. 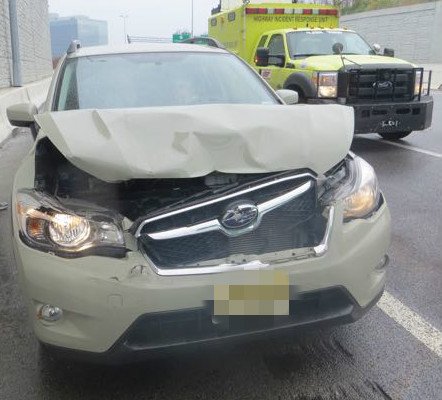 My 2 year old was in the back seat with my mom when we were rear-ended. There was a moment of silence when we came to a stop.

“BOOM!” he then said, laughing, quickly putting to rest my fear that he was hurt. (He then said BOOM about 10 more times.)  The back of my truck was a little bit dented but still drivable. After waiting for police to arrive in the rain and even chatting with the family of the driver (they had a 2 year old of their own) we were able to get home.

I drove a rental car for the next week while my truck was in the shop getting fixed.  One day I was digging around in the trunk for a pen that fell out of my bag and found something in the spare tire component that must have been missed when the last user returned the car.

It was a small bottle.  My first thought was that it was 5-hour Energy or Red Bull or something like that, but it was something completely different entirely. 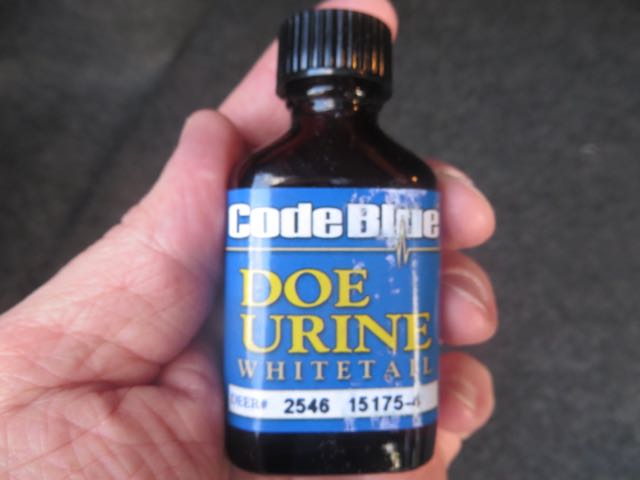 By my reaction you can immediately tell that I am not one of the over 17 million Americans who hunt for deer annually.

This particular variety of doe urine –  Code Blue –  is $9.88/oz at Amazon. There are single-malt Scotches that sell for less than that by the ounce. The right kind of deer urine is literally liquid gold.

So who would buy deer urine – and why?

One of the most common methods of deer hunting is to occupy a stand or blind in an area that sees a lot of deer traffic. As you can imagine, this involves a lot of sitting around waiting for deer to come by. It requires… patience. To speed things up, wouldn’t it be great if there was some way of broadcasting a message to deer that says, “come here!” without actually scaring them off?

Hence, scent attractants and pheromones. The idea is appealingly simple: by liberally applying some doe urine (or, ideally, “estrous doe urine”, collected while the doe is in heat) to an area around your tree stand, the hyper-sensitive nose of a big buck downwind will come by to investigate. By the time he discovers that there is no randy doe waiting for him, it’s too late – he’s in your sights, and not long after, his antlers will be on your wall.

Besides doe urine (and estrous doe urine) there is another class of deer attractant. Male deer secrete pheromones from their tarsal glands. If a dominant male smells another male in his territory, he may come to investigate and drive off the intruder. I’m told that these scents can be effective during the rut.

Deer urine and scent is a big business. It’s hard to estimate the exact size of the U.S. deer urine market – I found a 1997 article that puts it at about $17 million, and a later article [date unclear] which could put it at as much as $300 million, but it’s safe to say the annual production is in the hundreds of thousands of gallons.

That’s a lot of deer piss.

As an organic chemist, my first thought was to consult the chemical literature to find out what was known about deer sex pheromones and the constituents of deer urine. I was not disappointed.

The intrepid work of Jemiolo, Miller et. al. speaks for itself:

“Voided urine and vaginal secretions from estrous and mid-cycle females… were collected during the breeding season (i.e. October-January). Each female was allowed to associate daily with a mature, sexually experienced, epididymecotomized [i.e. sterilized] male… Estrus was identified as the day(s) on which the male displayed courtship behaviours toward the female and the female was receptive to mounting by the male. Mid cycle was identified as the midpoint between consecutive periods of estrus during the 26 day estrous cycle. “

The urine and vaginal mucus samples were analyzed by gas-chromatography mass spectrometry (GCMS). A total of 63 compounds were found in urine. Of these, 46 occurred in both stages (estrus and mid-cycle); 13 were present in estrous urine only, and 4 in mid-cycle urine only. [As a control, urine was collected from does who had their ovaries removed; none of these 17 latter compounds were present in the urine of these females. ]

So what are the magic ingredients in estrous doe urine? Here’s 9 of the 13 compounds (3 were not identified) that might tell the nose of a buck that a female is ready to go.

As you can see, these are all fairly small molecules (molecular weights of less than 200).  That’s to be expected – like perfumes, pheromones must be volatile enough to be transmitted through the air.

Among these compounds, a few stand out as being highly sensitive to air and degradation. When exposed to air for long periods, aldehydes (such as dodecanal, 2-nonenal, and acrolein) can oxidize to carboxylic acids. In addition, acrolein and 2-nonenal have double bonds adjacent to the aldehyde, which renter them particularly reactive towards nucleophiles. Acrolein in particular is a highly promiscuous compound that will react with a large number of nucleophiles.

4. The Buck Stops Where?

From the point of view of a company selling deer urine,  sensitivity of the aldehydes to air oxidation means that particular care would have to be taken with the storage of doe urine in order to make sure that all the components are still present when the consumer uses it.

An additional problem is that urine makes a great medium for bacterial growth. In order to address this issue, I’ve read that suppliers commonly add preservatives such as sodium benzoate.

Interestingly, one of the main producers is of the opinion that preservatives destroy the pheromones. From the Field and Stream article:

“From the beginning,” Collora says, “I wanted to offer a product that was as close to nature as possible. I think preservatives kill the pheromones, the good stuff, in urine. Fresh urine works better.”

Sodium benzoate is extremely innocuous. Of the 11 compounds depicted, only the 2 conjugated aldehydes (acrolein and 2-nonenal) would possibly react with sodium benzoate, and even then, it’s quite a stretch (conjugate addition of benzoate would lead to an intermediate aldehyde enolate, which is  thermodynamically uphill by a large margin). The remaining 9 should be completely inert.

Rather than investing in refrigeration or preservatives, the choice of Collora’s company has been to freeze-dry the deer urine:

“In 1995, Judi visited a University of Iowa professor who specialized in freeze-drying. When he assured her that the process was tailor-made for urine, Judi and Sam promptly bought an expensive machine that converts fresh pee into a spongy powder. Mix the contents of freeze-dried Mrs. Doe Pee with distilled water, and the result is as potent as the real deal.” [emphasis mine]

This is almost certainly not true. Any process which removes water from deer urine is going to remove a huge fraction of the volatile organic components too. Say bye-bye to hexane (b.p. 68°C), 2-methylhexane (90°C), acrolein, 4-octene (123°C), as well as a lot of your limonene (176°C) and 2-octanol (178°C). More of the decanal and 2-pentylfuran might make it, but whatever’s left over is going to be mostly electrolytes, ammonia salts, and various minerals – hardly the kind of stuff that will travel several miles downwind into a buck’s nostrils.

It should also be pointed out that these least volatile components are also the least likely to be the “good stuff” that Corolla claims that preservatives will react with.

Someone really needs to run these commercially available scents through a GCMS and let me know what you find. Take your time. I’ll be here.

Claims debunking the efficacy of deer scents have been made before. In 1989 Fred Trost, host of Michigan Outdoors, a popular television show, poured plain ammonia and Aqua-Velva on different patches of ground and showed that deer came up to sniff them just as much as the expensive stuff. [He also claimed that the deer urine was in fact cow urine, and lost a $4 million dollar lawsuit].

But then again, when you’re spending all day in a stand, $10 seems a small price to pay for even a faint hope that a nearby stud will be more likely to come visit your spot. People buy lottery tickets based on worse odds.

I’m reminded of the old story about the guy who walks into a bait and tackle shop and asks the owner, “My God, they’re purple and green. Do fish really take these lures?” And the owner says, “Mister, I don’t sell to fish”.

All this brings up a curious point. What if we wanted to isolate an unknown compound from a natural source – for example, the scent glands of a deer. How would we do that? What’s the process by which we go from a vague intuition that pheromones are involved to actually nailing down a specific compound?

Join us, deer reader, as we travel down the rabbit hole in the next post: