The Quick N’ Dirty Guide To SN1/SN2/E1/E2 Reactions, Part 3: The Role of Solvent

Let’s continue with our Quick N Dirty guide to SN1/SN2/E1/E2 – a quick walkthrough of thinking through this reaction decision.

There are four key factors to consider:

Recall that there are two important types of solvents to consider: polar protic solvents and polar aprotic solvents. [See this post: All About Solvents]

Polar protic solvents are solvents that are capable of hydrogen bonding. Recall that hydrogen bonding occurs where we have a highly electronegative atom such as O or N directly bonded to hydrogen. (See: The Four Intermolecular Forces And How They Affect Boiling Points)

Examples are water (H2O), alcohols (such as CH3OH , CH3CH2OH, t-BuOH) carboxylic acids (such as acetic acid) and even ammonia (NH3).

This is also why water is such an excellent solvent for charged species such as halide ions;  hydrogen bonding solvents surround negatively charged ions like a jacket.

Polar Protic Solvents “Cling” To Nucleophiles via Hydrogen Bonding, And Nucleophilicity Goes Up As We Go Down  The Periodic Table

Polar Aprotic Solvents Do Not Hydrogen-Bond With Nucleophiles, And Therefore Nucleophilicity In These Solvents Correlates With Basicity

This means that in solvents such as DMSO, DMF, acetone, or acetonitrile, nucleophilicity correlates much better with basicity  (and bond strength, as C-F > C-Cl > C-Br  > C-I ) – and therefore nucleophilicity decreases as we go down the periodic table.

Let’s go back to the examples we were looking at in the first two posts.
Practically, you’ll only need to consider the solvent in an SN1/SN2/E1/E2 decision when you’ve already analyzed the substrate and the nucleophile/base.
This is usually the case when you have a secondary alkyl halide with a strongly basic nucleophile such as NaOCH3 or NaOH.
That’s especially the case in example #2, where we really can’t make the call as to whether it’s SN2 or E2 until we’ve looked at the solvent. The fact that we are using a polar protic solvent (EtOH) is the crucial piece of information that clinches the reaction as E2.

In the last post in this series we’ll look at the impact of temperature on these reactions.
Next Post: The Role Of Temperature

Note 1.  What’s the weakness of the Quick N’ Dirty approach? Well, it doesn’t really capture the true situation in these reactions, that is, that they don’t always give one product exclusively.
So keep in mind that when the Quick N’ Dirty approach says that E2 is the major product, you may also have a small amount of competing SN2 occurring as well, or if SN1 is favored, you might have small amounts of other reaction products also.
The key points of this exercise is to 1) remember the major factors that affect each type of reaction, and 2) once you know the type of reaction, be able to apply it. 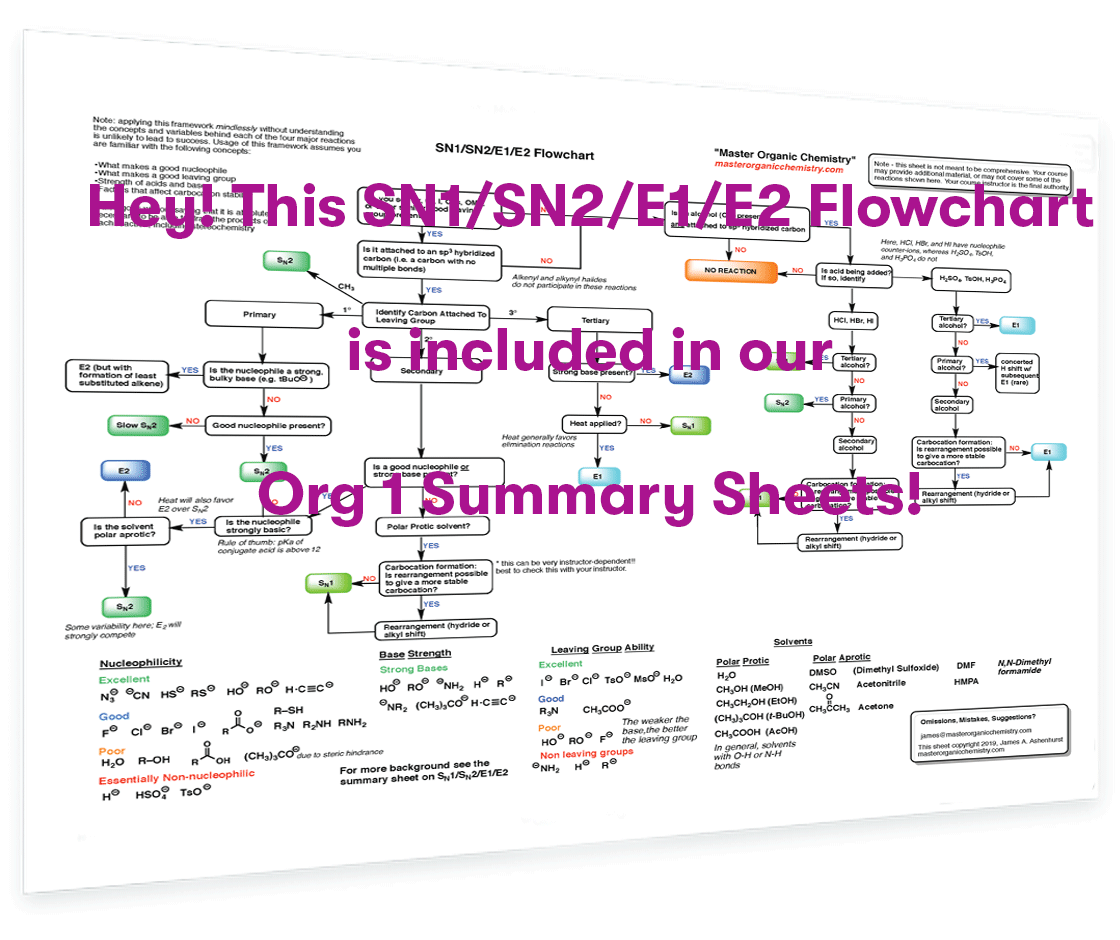