If you’ve been learning about stereochemistry, enantiomers, and diastereomers,  the following might sound familiar:

[If you’re unclear on the difference between enantiomers and diastereomers, I’d suggest going back to this post]

What does that term “optical rotation” mean? Or, for that matter, “optical activity”? You might also have heard of “specific rotation”. What’s that? We’ll cover all of these concepts below.

Louis Pasteur is more than just the man whose name was lent to the process of  “pasteurization”. He is also the father of organic stereochemistry . In 1848, Pasteur published a study on the recrystallization of various salts of tartaric acid, or “tartrates”, which are found naturally in wine (aka “wine diamonds”). 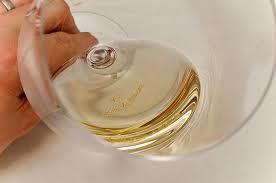 Of particular interest to Pasteur were the crystalline forms “racemic acid” (from the Latin racemus for “a bunch of grapes”), which at that time was thought to be an isomer of tartaric acid.

At the time, it was known that racemic acid did not turn the plane of polarized light, whereas “tartar”, the most common salt of tartaric acid, rotated plane-polarized light to the right [“dextrorotatory”, or (+) ]

Upon close inspection, Pasteur noticed that the potassium sodium salt of “racemic acid” crystallized in two separate crystal forms  which were mirror images of each other. According to rules of crystal morphology,  one type was “right handed”,  and the other was “left handed” . [Maybe you’ve heard of  “left-handed” and “right handed” screws? The process of naming left and right-handed crystals is similar. ] 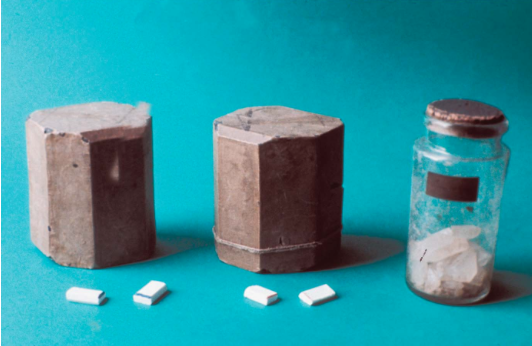 This was a strange result, since there was no reason to think that crystals that did not themselves rotate plane-polarized light should have any chirality. Pasteur carefully arranged the crystals and discovered that one half of them were right handed and the other half were left handed. Taken into aqueous solution, the right-handed crystals were dextrorotatory (exactly like crystals of “tartar”, from wine) and the left-handed crystals were levorotatory, to precisely the same degree.

From this Pasteur postulated that the two molecules were mirror images of each other – even though it would be years before the absolute structure of tartaric acid was known, and 25 years before Van’t Hoff proposed the tetrahedral shape of carbon as a means of explaining the existence of optical isomers. [Note 2]

2. The Structure of  The Three Stereoisomers Of Tartaric Acid

We now know that what Pasteur called  “racemic acid” was not a single compound, but in fact a mixture of two enantiomers of tartrate.  Upon crystallization, the [S,S] and [R,R] enantiomers gave different crystals which Pasteur separated mechanically, i.e. by hand. [Note: in the figure below, we show “tartaric acids”; Pasteur did his work on the salts of the conjugate bases, which we call “tartrates”]

Thus these are called “optical isomers” in that they differ solely in the direction of their optical rotation.

By the way, Pasteur also studied a third form of tartaric acid that does not rotate plane-polarized light at all.  This form was called “meso” (Greek for middle, since the light was rotated neither to the left nor the right). The configuration of the two chiral centers were subsequently determined to be (R,S).

If you’ve covered chirality at all, this term “meso” might be familiar to you.  Despite having two chiral enters, “meso” tartaric acid has an internal plane of symmetry and is therefore not a chiral molecule. The name “meso” has come to denote a whole class of compounds that bear chiral centers but are not themselves chiral.

3. Do Molecules With An (R) Configuration always Rotate Plane-Polarized Light To The Right? (Hint: No)

No! There is no simple way to predict the direction of rotation based on the structure. If you want to know what direction a molecule rotates polarized light, you just have to measure it.

This of the problems with discussing a relatively old field like organic stereochemistry is that there are many layers of terminology, some obsolete, that must be peeled away.

The Cahn-Ingold-Prelog system [the origin of naming chiral centers (R) and (S) ] is a relatively new development, dating back to 1951.

(R) and (S) describe the absolute stereochemistry of chiral centers, which you can use to draw the molecule if you know the connectivity of a molecule and understand how to apply the system.

Before the (R,S) system, we had the D, L- system, which were based on Emil Fischer’s guess of the absolute structure of (+)-glyceraldehyde, and then applied to other molecules through chemical analogy. [Note 1].

5. Polarimetry: The Measurement of Optical Rotation

Let’s briefly delve into what got us into this situation in the first place: the measurement of optical rotation. It has been known since at least the 1810s that certain crystals (e.g. quartz) had chiral forms that rotated plane-polarized light in equal and opposite directions. Furthermore, solutions of glucose and turpentine were measured using this technique and shown to be optically active.

Although the equipment has changed, the technique of polarimetry is no different than it was in Pasteur and Biot’s day. The first step is to pass light through a polarizer, which only allows light with waves aligned in one direction to pass. This polarized light is then transmitted through the material to be studied, in our case a cell containing a solution of the molecule. 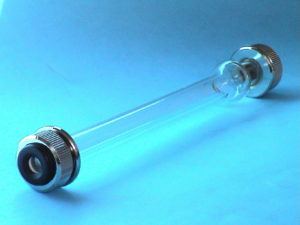 At the other end, a second polarizer is rotated a given angle θ until this light is transmitted through the slit. Obviously if the solution is not optically active at all, this angle will be zero.

Here is a diagram of a modern polarimeter. Image source: wikipedia 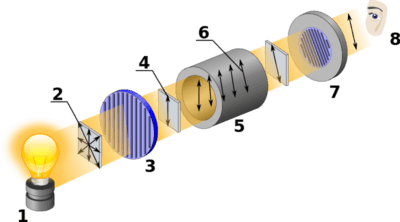 Now comes the final piece of the puzzle: standardization. It would be useful to have a common standard for optical rotation that allowed us to compare samples collected under slightly different concentrations and path lengths,  a little bit like how earned run average (ERA) allows for comparison of performance between pitchers, or goals against average (GAA) for goalies, or batting average, or quarterback passer rating… you can pick your own sports metaphor.

The term that has been developed for this is specific rotation.

The specific rotation of a molecule is the rotation in degrees observed upon passing polarized light through a path length of 1 decimetre (dm) at a concentration of 1 g/mL.

NOTE: As commenter Dr. Fred points out, in most cases dissolving a whole gram of material into a millilitre of solvent is impractical!  In laboratory settings, concentration is measured in g / 100 mL and a correction factor of 100 is applied to the numerator. Values of c from the literature should be assumed to be in g / 100 mL.

For reporting purposes, the specific rotation is usually accompanied by the wavelength (often the D-line of sodium, 589 nm) and the temperature. Here’s an example for D-(+)-glucose.

Most problems involving specific rotation will ultimately just require a bit of high school algebra. “Plug and chug,” so to speak. Here’s an example:

A sample containing a single enantiomer of fluoxetine (Prozac) is placed in a polarimeter. The observed rotation is 9.06° clockwise. The sample was made by dissolving 1.24 g of fluoxetine in a solution with a total volume of 2.62 mL. The light source was a sodium D line and the temperature was 25° C. The length of the sample tube was 1.25 dm.

You can solve this problem with the following steps.

Note that we usually just report this number in degrees, although the actual units are degrees cm2 g-1

Questions or comments about this post? Leave one below!

Note 1. Thank whatever god you wish to pray to that Fischer guessed correctly, because the old chemical literature would be a bloody nightmare to navigate if he had guessed wrong.

Note 2. Material in this paragraph was adapted from this excellent historical article by crystallographer Howard Flack – highly recommended. In particular, I love Pasteur’s account of demonstrating the resolution of racemic acid to his mentor, Biot.