Staggered vs Eclipsed Conformations of Ethane

Staggered vs Eclipsed Conformations of Ethane, or Why Newman Projections Are Awesome

In this article: introducing conformational isomers, staggered and eclipsed conformations, the Newman projection, the dihedral angle (torsion angle), and the rotational barrier to ethane (torsional strain)!

In a previous post we discussed how we know that methane CH4 is tetrahedral (See: How Do We Know That Methane Is Tetrahedral), as this shape maximizes the distance between the repulsive bonding electron pairs.

This convention borrows an old artists’ trick: to give the illusion of perspective,  depict objects in the foreground with high-contrast (heavy lines), and objects in the background with low contrast (faint lines).
Hover here for a pop-up image .

Here’s are two “line-wedge” drawings of CH4. Both of these drawings depict the same three dimensional object.

Does it matter whether the “wedged” bond is drawn below or above the “dashed” bond?

No. Whether or not the wedge is drawn below or above the dash is just a matter of perspective, depicting what you’d see if you were looking “down on” or “up to” the CH4 molecule.

Many other perspective drawings of methane are possible,  the perspective where two C-H bonds are in the plane of the page has the most utility. It clearly depicts all atoms arranged tetrahedrally about the central carbon, involves the least amount of work,  and therefore tends to be the standard way to depict these molecules.

Very rarely, it’s useful to show other perspectives of CH4. For instance, did you know that when you look along one of the C–H bonds, it makes the other C-H bonds look like they are separated by angles of 120° ?

Note: to be clear, the H–C–H bond angle is still 109.5°. What’s being said here is that in this perspective, the three hydrogens trace out a circle, with an angle of 120° separating them).

More on that in a moment.

2. The Three-Dimensional Structure of Ethane (C2H6)

All we need to do is replace one of the C-H bonds of methane with a bond to a CH3 (“methyl”) fragment.

There’s several ways to draw it using a bond-line diagram. Two of them are drawn below.

Molecules are 3-dimensional objects. Note that these drawings both depict the same molecule, but are drawn from different perspectives.

This becomes clear if you rotate the molecule by 180 degrees.

By building a model of them both, by rotating one of them 180 degrees we can see that they are the same thing.

An important point: In chemistry, if two molecules can be superimposed on each other, that means that they are the same molecule.

The addition of the new carbon-carbon bond in ethane brings about some additional complications that are part of what makes organic chemistry interesting (or as some of us like to say, “fun”).

Methane has the same three-dimensional shape at all times. We can draw it from a number of perspectives, but it retains the same shape.

This is not true of ethane!

The two CH3 fragments are joined by a carbon-carbon sigma bond. The connection of two atoms through a sigma bond is like connecting two Lego pieces through a single “stud” and “tube”.  Rotation can occur along the bond without disrupting the connection.

This rotation about the C-C bond can give rise to a variety of 3-dimensional shapes.

That means that a second, perfectly valid, way to draw ethane, is like this:

This is a conformational isomer of the drawing of ethane we made previously (above).

The difference is subtle! These two conformational isomers can be interconverted by rotating the carbon-carbon bond 60 degrees, like this:

So the two conformational isomers represent the same molecule, but a different three-dimensional shape.

[These shapes also have subtle differences in energies – more on that in a moment. ]

4. Eclipsed And Staggered Conformations Of Ethane

In case it’s still not obvious to you how these two forms of ethane are subtly different, it might help to look at it end-on.

Let’s take the first drawing of ethane, and look along the C–C bond from the right hand side. In order to show this, we often use little symbol that is intended to look like an eye, along with an arrow showing the direction in which the “eye” is looking. Think of it as, “side-eye”.

When apply this “side-eye”,  we get this:

We call this the “eclipsed” conformation.

The “end-on” perspective shown in the video is a Newman projection – more on that in a second.

Now let’s take the second drawing of ethane, and look along the C–C bond from the right-hand side.

In this case, note that all the hydrogens are spaced out 60 degrees from each other.

This is referred to as the “staggered” conformation.

As you probably noticed, the “end-on” views of the staggered and eclipsed conformations in the short videos above were drawn in a quirky way. What’s the deal with those circles?

A Newman projection is a perspective drawing of a molecule looking “end on” along one of the bonds. It wasn’t the first proposal [Note 3] for this perspective, but it’s become the industry standard.

The “circle” is meant to depict the atom in the foreground which blocks the view of the carbon in the background.

In the case of ethane, there’s really only interesting bond to look along: the carbon-carbon bond.

Rather than consider every conformation (there are an infinite number), it greatly simplifies discussion if we to just consider the two extremes in ethane – when the C-H bonds on the neighboring carbons are at their minimum distance from each other (0°, eclipsed) or their maximum distance away from each other (60°, staggered).

6. The Dihedral Angle (Or Torsion Angle)

As a wise person once said, perspective is worth 80 IQ points.

The genius of the Newman projection is that the “end-on” perspective makes analysis of the spatial relationships between the front and back groups much more obvious.

The dihedral angle [also: torsion angle] is defined as the angle made between the four atoms A-B-C-D when looking along the B-C bond.

A clock face is a useful analogy. At 12:00, the dihedral angle is 0°. Every hour represents 30°. For the purposes of tetrahedral carbon, 30° is not very interesting (it’s doesn’t lead to an energy maximum or minimum) so let’s employ 2-hour increments instead.

7. Mapping Out The Conformations Of Ethane By Dihedral Angle

Let’s try this with ethane.

In order to define a torsion angle, we need to arbitrarily select two of the C-H bonds on the neighboring carbons to be our reference points.

Let’s start with the two H atoms highlighted in red, with a dihedral angle of 0° (12:00 in our clock analogy).

If we start at 12:00, and keep the front CH3 in the same place while rotating the “back” CH3 in 60 degree increments, ,we get something like this:

It bears repeating:  staggered and eclipsed refers to the orientation of the front 3 groups with respect to the back 3 bonds.

This is different than the dihedral angle, which in this case refers to the angle made by H–C–C–H when looking along the C–C bond.

Here’s a quick movie of what that looks like on a Newman.

There’s really only two important conformations of ethane, and they repeat themselves 3 times as we rotate the C–C bond through 360°.

So are the two important conformational isomers of ethane equivalent in energy?

No they are not. As discovered by Kemp and Pitzer in 1936 [ref], the two conformations differ in energy by about 3.0 kcal/mol and the energy difference can be measured through a variety of techniques (see here).

This means that there is a small barrier to rotation of about 3.0 kcal/mol. [Note 6] This barrier isn’t big enough to prevent “free” rotation about the C-C bond, but it does mean that the staggered and eclipsed conformations will be present in different amounts (with the staggered predominating).

[The classic reason stated for the barrier to rotation is  Van der Waals repulsion of the C–H bonds on the adjacent carbons in the eclipsed conformation. Others favor a “hyperconjugation” explanation. Further reading in the references [1 2] for the curious].

With this information in hand, we can make a graph of dihedral angle versus energy that looks like this:

As the C–C bond undergoes rotation such that the molecule goes from a staggered to an eclipsed conformation, the molecule experiences strain.

This type of strain is called torsional strain, eclipsing strain, or Pitzer strain, depending on who you talk to. [Note 5]

The term “torsional strain” is an analogy to the twisting force one experiences when you twist a spring or (more commonly) a rubber band – for instance, in a rubber-band driven propeller plane.

That force you feel that makes the elastic want to “unwind” is a form of torsional strain.

9. What About Propane and Butane?

So what about higher alkanes? As you expect, things get a little bit more complicated…  but it’s really not too bad.

In the next article we’ll look at the conformations of the next alkane up,  propane (CH3CH2CH3)

Note 1. Another depiction of CH4 that is worth noting is the Fischer projection, where the horizontal bonds are wedges that “come out to hug you”, and the vertical bonds are “dashes” that point behind the page.

Note 2. Here’s a screenshot of the original Newman paper.

Here’s the Newman projections from this paper. 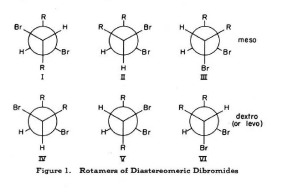 Note 3. The Newman was not the first attempt to show this perspective. For some reason the Hermans and Bischoff projections never took off. Source.

Note 5. IUPAC has decided to replace “Torsional Strain” and “Pitzer strain” with “Eclipsing Strain“. The chance of this preventing people using these terms in everyday lab parlance is zero.

10 thoughts on “Staggered vs Eclipsed Conformations of Ethane”