Home / Reactions on the “Benzylic” Carbon: Bromination And Oxidation

Reactions on the “Benzylic” Carbon: Bromination And Oxidation

In nutrition, “roughage” is what you call all the cellulose and fiber present in foodstuffs that just shoot through your body without actually being digested.

That pretty much describes the behavior of alkyl groups in the vast majority of the organic chemistry reactions we’ve learned. Their chemistry is “boring”. They may comprise the backbone and overall structure of the molecule, but their C-H bonds are inert to most reaction conditions. [note]

In fact, if you don’t count combustion, pretty much the only reaction of alkyl groups we cover in introductory organic chemistry is free-radical substitution. And even that reaction tends to be pretty unselective, particularly if you’re dealing with free radical chlorination. [See: Selectivity in Free-Radical Reactions]

We’ve seen that an exception to this “boring” behavior can be found in the free-radical bromination of so-called “allylic” C-H bonds [See: Allylic Bromination]. The “allylic” position is a carbon that is adjacent to a double bond  (not a C-H on the double bond itself! that’s a “vinylic” C-H).

What makes the “allylic” position so special? Allylic radicals, carbocations, and anions are considerably stabilized through resonance. The orbital of the allylic radical, carbocation, or anion can align itself with the p-orbitals in the adjacent pi bond, resulting in a larger “pi system” and spreading out the charge over a greater area. [See: the molecular orbitals of the allyl radical, cation, and anion]

2. There’s Something Special About Alkyl Groups Adjacent To A Benzene Ring

What’s the reason for this little trip down memory lane? Well, we’ve recently spent a little while going over the Friedel-Crafts alkylation reaction, and I don’t want to give you the impression that putting an alkyl group on a benzene ring is a synthetic dead-end.

Alkyl groups don’t have to be inert! Like allylic carbons, alkyl groups that are adjacent to benzene rings are particularly reactive, and this can have all kinds of important applications.

There are two important reactions we will cover in this post:

First, one quick order of business. Let’s get some important nomenclature out of the way, because “phenyl” and “benzyl” cause a lot of confusion:

The analogy of phenyl with vinyl and benzyl with allyl also extends to the stability of their radicals (as well as their carbocations and anions).

5. Benzylic (and Allylic) C-H Bonds Are Weak, Relative To Other Alkyl C-H Bonds

Since bond dissocation energies reflect the ease of homolytic cleavage of the C-H bond (i.e. how easy it is to dissociate the bond into two free radicals)  this is another way of saying that benzylic radicals are particularly easy to form, relative to other alkyl radicals.

We’ve previously seen that the same is true for allylic C-H bonds . In ‘allylic bromination’, one of the C-H bonds on the alkyl group adjacent to a double bond is converted to a C-Br bond, using N-bromosuccinimide (NBS) and light (hν) :

[Why NBS and not Br2 ?  The purpose of NBS is to provide a constant, low-level concentration of Br2 that is available for the free-radical substitution reaction. It might seem simpler to just use Br2, but  Br2 quickly reacts with double bonds to give vicinal dibromides! ]

The reaction is selective for allylic C-H in the presence of primary, secondary, and tertiary C-H bonds due to the weaker allylic C-H bond strength (89 kcal/mol).

A similar process works for “benzylic” carbons. We can use NBS (as above) or simply just Br2, since aromatic rings aren’t nearly as reactive with Br2 as double bonds are. [Note 2]

Once formed (through “heat” or “light”, which initiates the reaction through homolytic dissociation of Br–Br), the bromine radical, Br• can break the weaker benzylic C-H bonds without touching stronger alkyl C-H bonds.

For instance, here are the products of its reaction with toluene, and also isopropylbenzene. Note that ONLY the benzylic carbon is brominated. Everything else is left alone!

7. When Does “Benzylic Bromination” NOT Work?

Since the key to this reaction is formation of the (relatively stable) benzylic radical, benzylic bromination will fail on substrates where generating this radical via breaking a C–H bond is impossible.

For example, look at the example below.  How can a benzylic radical possibly be generated when the benzylic carbon has three alkyl groups attached? It can’t –  and the reaction fails.

Well, it allows us to employ all the reactions of alkyl halides that we covered back in Org 1 – mostly substitution and elimination – to provide products that would be difficult to install directly on an aromatic ring through Friedel-Crafts reactions. [See: Synthesis: Reactions of Alkyl Halides]

For instance,  can use benzylic bromination  to set up an SN2 reaction, e.g. after a Friedel-Crafts alkylation:

See how installing a good leaving group at the benzylic position gives us all kinds of options for installing various functional groups?

We can get around this roadblock by performing a Friedel-Crafts alkylation with ethyl chloride, followed by benzylic bromination and then elimination (via E2, with something like NaOtBu/t-BuOH) to give the alkene:

Based on the above, here’s a quick quiz for you. How might you convert tetralin (below left) to naphthalene (below right)? Answer in the footnotes.

9. Benzylic oxidation With KMnO4 (or H2CrO4)

Since the benzylic C-H bond is relatively weak, you might rightly ask if other types of reactions (besides bromination) can be performed at this position.

They certainly can! A prime example is benzylic oxidation – where a benzylic C-H bond is broken and a benzylic C-O bond is formed.

Now: there exist fairly gentle reagents for benzylic oxidation that are the chemical equivalent of tickling the C-H bond off with a feather, resulting in a benzylic aldehyde or ketone [the alcohol is an intermediate, but usually oxidized up to the aldehyde/ketone under these conditions].

That is not the type of benzylic oxidation that is covered in a typical introductory organic chemistry course!

Instead,  the main reagent for benzylic oxidation that is covered in most intro textbooks is hot potassium permanganate (KMnO4). Hot chromic acid (H2CrO4, which is formed by combining a dichromate salt like Na2Cr2O7 with a strong acid like H2SO4) can also be used for these purposes.

A solution of hot KMnO4 is like a bag full of angry piranhas that will tear all the flesh off of your molecule and leave only bones behind. (Come to think of it, it’s kind of like your liver!  [note] )

Hot KMnO4 will break every benzylic C-H bond and convert it into a C-O bond. From toluene, for example, the product is benzoic acid (a carboxylic acid).

But it doesn’t just break the benzylic C-H bonds. Oh no. It goes after C–C bonds too; at least the ones that aren’t directly attached to a phenyl ring. For example, para-diethylbenzene is converted into para-benzene-dicarboxylic acid.

Note that the alkyl C-C bond has to be cleaved off in order for this oxidation to occur! (it is likely oxidized all the way up to CO2 gas).

An interesting variation is on a cyclic molecule like tetralin; the result is the dicarboxylic acid.

As with benzylic bromination, no reaction occurs if there is not a C-H bond on the benzylic position. For example, the reaction fails completely with t-butylbenzene:

The full mechanism of benzylic oxidation is too complex, lengthy, and uncertain to show here, but the first step is almost certainly homolytic cleavage of the C-H bond by the Mn=O to form the benzylic radical.

11. Why Is This Important? [Hint: Applications In Synthesis]

Benzylic oxidation with KMnO4 is a harsh reaction, but it can have its uses. It works best with simple molecules that don’t have delicate functional groups and can withstand some very rough treatment.

The first thing to note is that carboxylic acids can’t be placed directly on a benzene ring via the Friedel-Crafts acylation, so alkylation followed by oxidation is a useful workaround.

The second useful function in synthesis is the fact that benzylic oxidation converts an o- p- director (an alkyl group) into a meta-director.

For example, confronted with the synthesis of the following molecule, how do you proceed? (hint: it involves a benzylic oxidation at some point).  [answer in footnotes]

We’ll have a lot more to say about synthesis of aromatic compounds in a few more posts.

Next: Reduction of benzylic carbonyls – the Clemmensen and Wolff-Kishner reductions

[Note 1]  “Cabbage” can also be used as a slang term in chemistry for “all that stuff on the molecule that you can safely ignore” for whatever reason. For instance, bryostatin is a beast of a molecule that shows promise as an anticancer agent. Trouble is, it takes a ton of a rare bryozoan to get a decent amount of bryostatin, and that isn’t enough for a clinical trial on humans. So several groups have been working on making simpler, easier to synthesize “bryologs” where they get rid of the “cabbage” that isn’t essential for antitumor activity.

[Note 2] Br2 will generally not react with aromatic rings without a Lewis acid catalyst. However if a strong activating group is present (such as OH, NR2, etc) some bromination of the ring can occur, especially at elevated temperatures.

Fun fact: “Benzylic oxidation” is the answer to the puzzle of why methylbenzene (toluene) is not nearly as potent a carcinogen as benzene.  That’s because your liver has cytochrome p450 enzymes (containing high oxidation-state iron species) that can oxidize the benzylic CH3 group to the more water-soluble carboxylic acid, allowing it to be cleared by your kidneys.

[Note 3] This requires two oxidations and two eliminations. A cautious way to do it is to oxidize (i.e. brominate) once, and then eliminate to give an alkene. The alkene could then be subjected to bromination again (using NBS, so as to avoid bromination of the double bond) to give another bromination (benzylic bromination product shown here, but allylic also feasible) which could be treated with base to give aromatic naphthalene.

(in practice, it turns out that both brominations can be done at the same time using Br2 at high temperature. Treatment with base can then yield naphthalene). 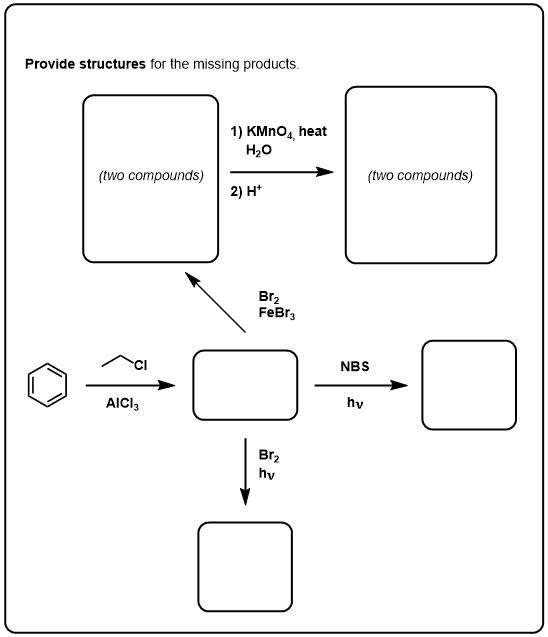 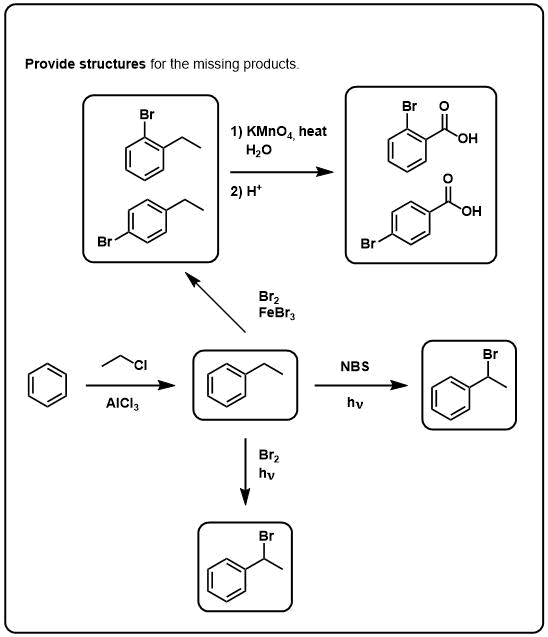 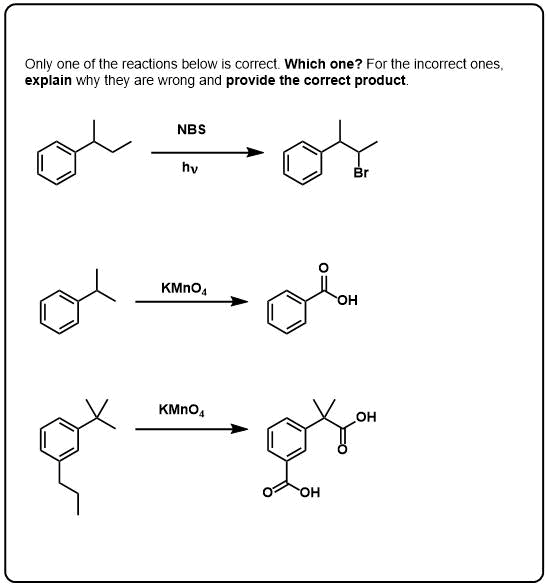 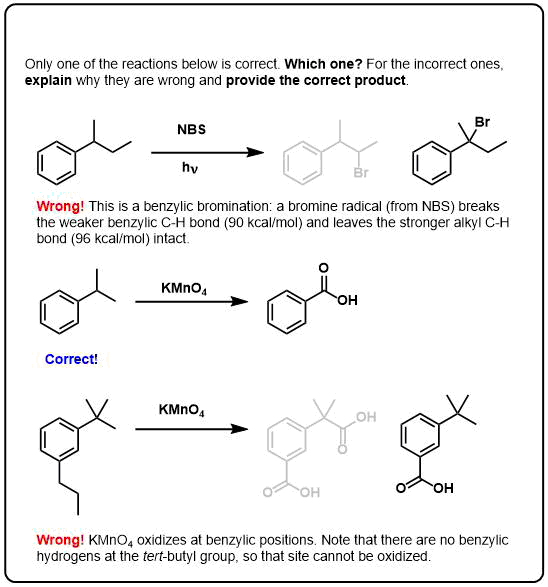 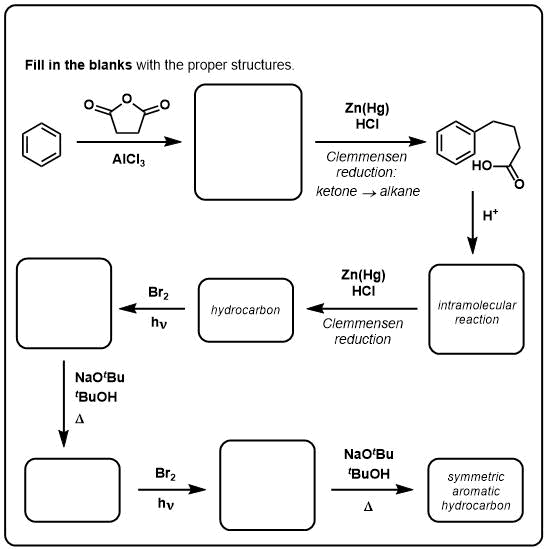 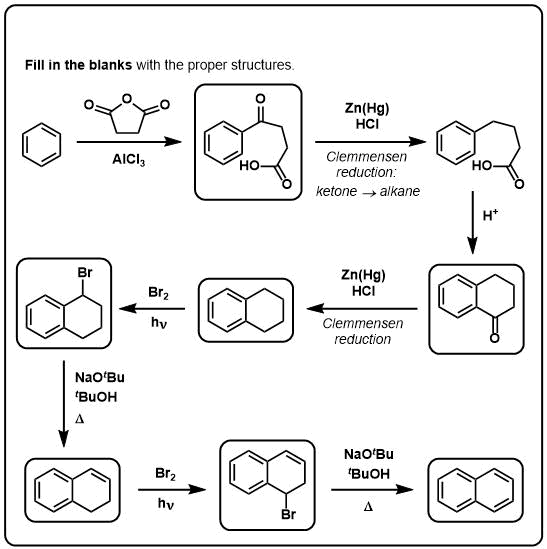 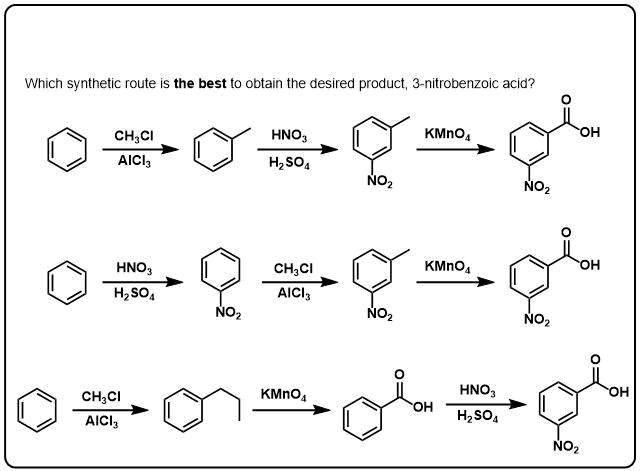 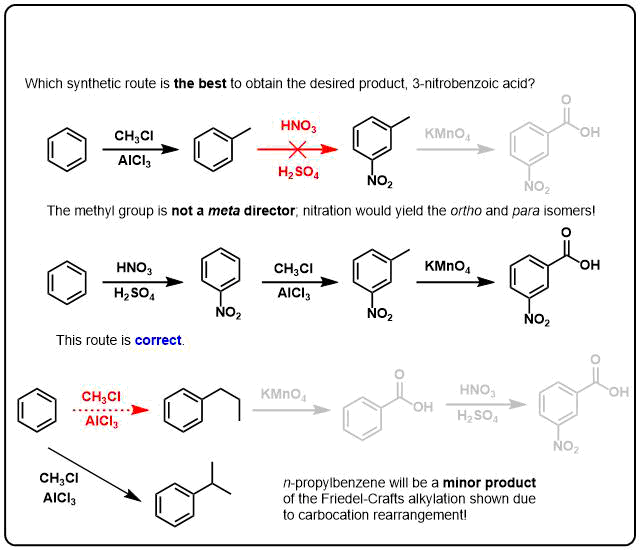 Benzylic Bromination:
This reaction is also known as the Wohl-Ziegler reaction.

8 thoughts on “Reactions on the “Benzylic” Carbon: Bromination And Oxidation”