Having gone through the mechanism of electrophilic aromatic substitution, explored activating and deactivating substituents, and seen the importance of directing groups, let’s now take the opportunity to use these concepts to answer some slightly thornier questions.

Here’s a thorny question: What happens when we perform an electrophilic aromatic substitution reaction when there are two substituents on benzene?

And say that one of them is an ortho-, para- director and one is a meta- director, and they “direct” electrophiles to different carbons on the ring?

Let’s start with 1-methoxy-4-nitrobenzene, which also goes by the name, p-nitroanisole.  Say we try to perform an electrophilic aromatic substitution reaction. Where does the electrophile react? What’s the directing group, OCH3 or NO2 ?

The first thing to do is to analyze each substituent individually.

As it turns out, both substituents direct to the same position (C–2).  This gives us the product 2-chloro-1-methoxy-4-nitrobenzene, which indeed is the major product. [Note]

3. When Two Or More Substituents Are Present, The Directing Group Will Be The Most Activating Substituent.

That example was a little too easy. Let’s look at a slightly more ambiguous example: p-methylanisole. Here there are two o-, p- directors: –OCH3 and –CH3.

The tricky part is that they each direct to different carbons. So which substituent “wins” here?

Here’s a good rule of thumb:

Here is a useful (but not comprehensive) ranking of activating / deactivating groups:

Since OCH3 is a more activating substituent than CH3 (i.e. OCH3 accelerates the rate more, because it is a better electron-donor),  the substituent will end up ortho to the OCH3, not ortho to CH3.

A more technical way of describing our rule is: since the rate determining step in electrophilic aromatic substitution is formation of the (electron-poor) carbocation intermediate, the substituent which is most electron-donating will result in the lowest-energy transition state and therefore the lowest activation energy, and therefore will determine the major product.

4. If Attack At Two Or More Positions Is Possible, Pick The Least Sterically Hindered One

Here’s another disubstituted example. m-dimethoxybenzene has two identical groups, both of which are ortho-, para- directors.

When we analyze the influence of the directing groups, we again see that their directing effects are additive.  Attack at three positions is “favored”: C-2 (in between the two methoxy groups), C-4, and C-6.

As it turns out, attack at C-4 / C-6 will result in the same product, so we really have only two reasonable products to consider.

Which of the two products will dominate?

The C-2 carbon is flanked by two methoxy groups, while the C-4 and C-6 carbons are adjacent only to one. Attack at C-2 will be much slower owing to to this greater steric hindrance.

Rule #2: When attack at two or more electronically equivalent sites is possible, the electrophile will favor the position flanked by the fewest number of substituents.

You might recall that we observed this effect previously in electrophilic aromatic substitution reactions of mono-substituted benzene derivatives like methoxybenzene. Even though there are two available ortho- positions, the para- is the major product because it’s less sterically hindered!

Let’s finish with a last example that lets us tie these examples together.  1-t-butyl-3-nitrobenzene.

Here we again have a situation where two groups direct to different positions.

Which of these three positions is flanked by the fewest substitutents? Clearly, C-2 is out, being flanked by two groups. This leaves us with C-6 and C-4, which are each flanked by a single group.

When faced with trying to predict the product of an electrophilic aromatic substitution reaction of a disubstituted benzene, there are two important rules of thumb:

(Or, as a wag might describe it, it all boils down to  “electronics” and “sterics”).

One can apply these two principles to a large variety of commonly encountered situations.

In the next series of posts, we’ll go through some key electrophilic aromatic substitution reactions in detail. Next up: halogenation.

In fact the dominant product is 1,4-dichloro-2-nitrobenzene, and almost no 1,2-dichloro-4-nitrobenzene is formed. The reason is not well understood but is likely due to be through intramolecular assistance from the meta-directing group. [See March’s Advanced Organic Chemistry 5th ed. p. 688 and references therein. ] 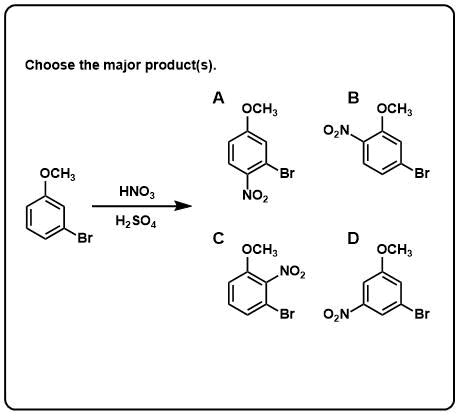 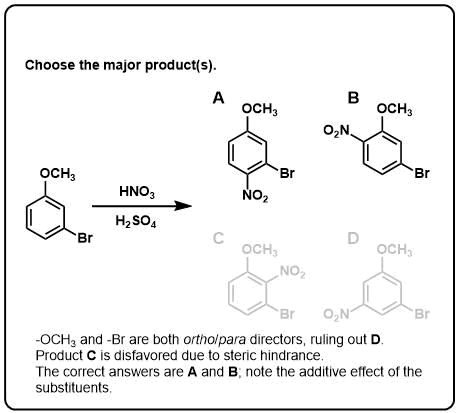 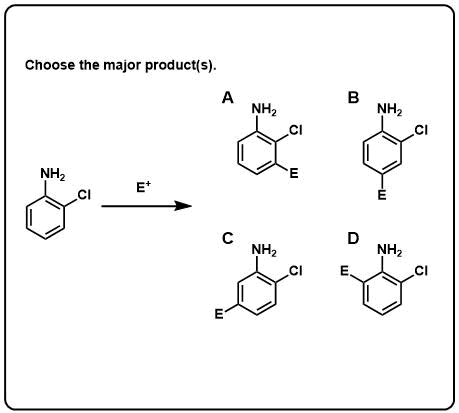 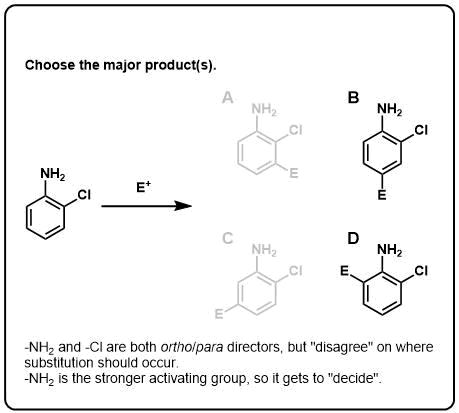 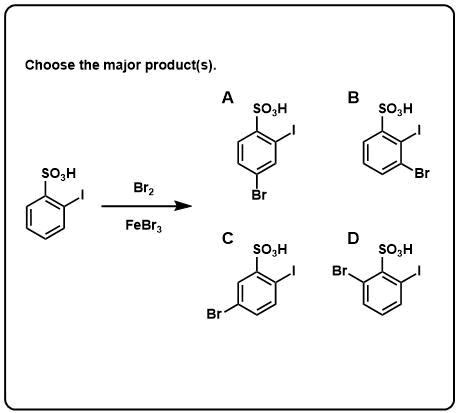 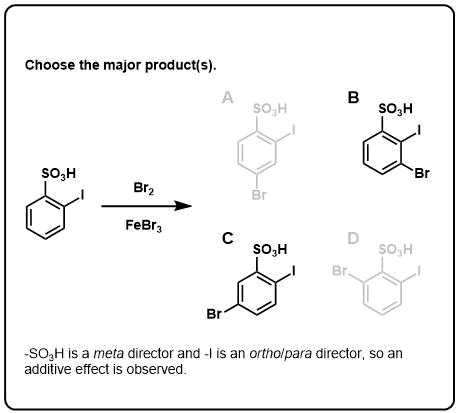 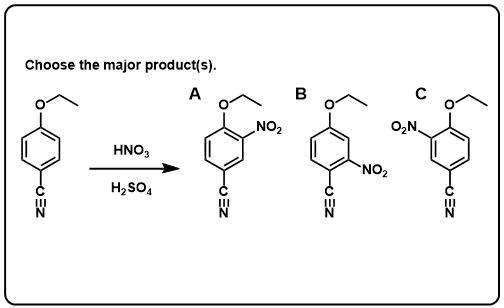 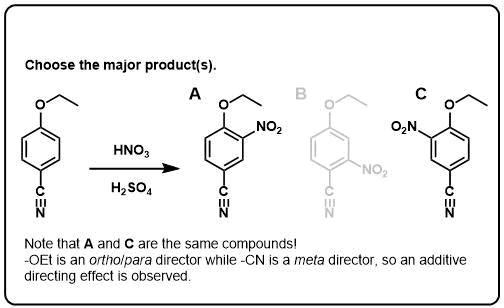 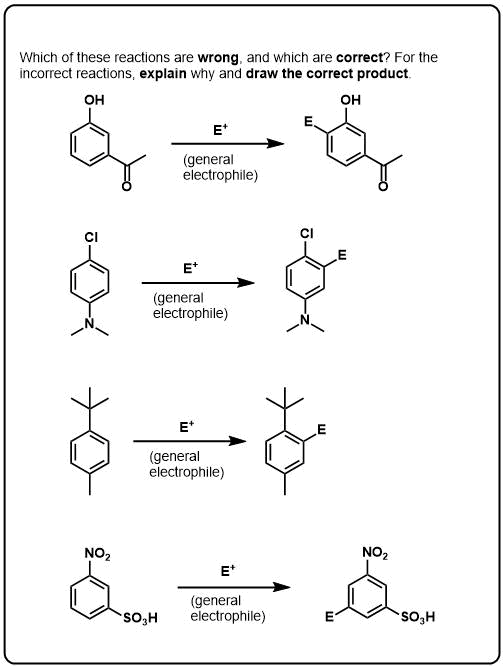 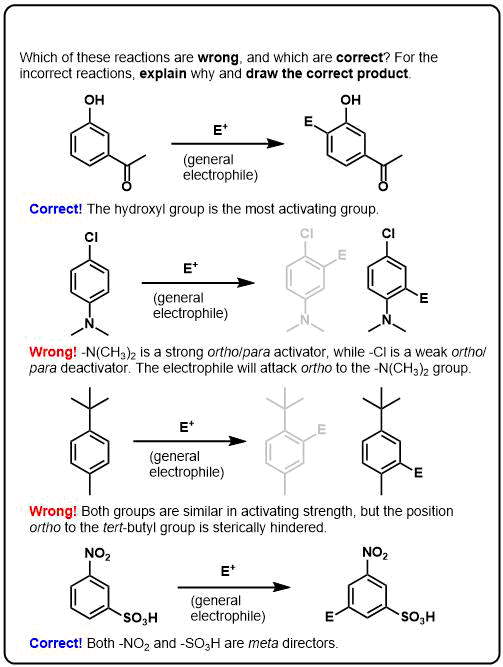 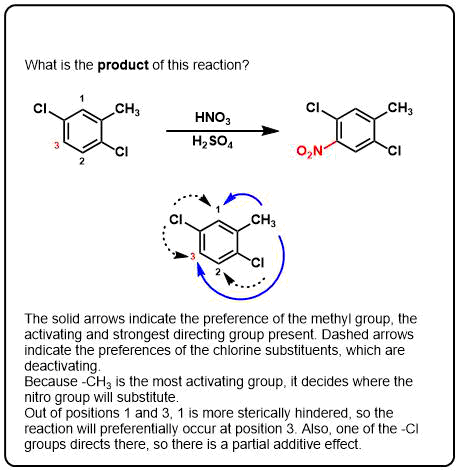