we’re finally ready to dig into some specific reactions in detail. First up: halogenation. How do we install Cl, Br, or I on an aromatic ring?

[What about fluorine? If F2 wasn’t such a ravenous beast, we’d include it too, but as it stands, fluorine is best introduced to aromatic rings indirectly]

You may recall that alkenes react readily with  Cl2, Br2, and I2 to form dihalides.

Benzene? Not so much. And when it does react with aromatic rings, it provides substitution rather than addition products.

[Why? Recall that the resonance energy of benzene is about 36 kcal/mol, and electrophilic aromatic substitution disrupts aromaticity. ]

2. Lewis Acids Can Be Used To “Activate” Electrophiles

Chlorine itself will react with “activated” benzene derivatives (such as phenol and aniline) but in order for chlorination to occur with electron-neutral or electron-poor aromatics, it needs a kick in the pants.

This “kick in the pants” is provided by a Lewis acid.  FeCl3 or AlCl3 are the industry standard, but in practice many different Lewis acids can be employed.

You may recall from the chapter on alcohols that protic acids are commonly used to turn poor electrophiles (e.g. alcohols) into better electrophiles by converting an alcohol into its conjugate acid. [post: The Conjugate Acid Is Always A Better Leaving Group].  The “activated” alcohol is then able to participate in nucleophilic substitution or elimination reactions that it would not have been able to participate in otherwise:

[The leaving group may even depart entirely to give a carbocation, an even better electrophile!]

Sometimes we draw this as an equilibrium. I personally prefer showing the intact Cl–Cl bond, but textbooks vary.

This “activated” electrophile can then be attacked by the nucleophile (the benzene ring) in an electrophilic aromatic substitution reaction. Here, C-Cl forms, and the C-C (pi) bond breaks!

In the next step,  a weak base removes a proton from the carbocation intermediate, breaking C-H and forming C-C (pi).

If this looks a tiny bit familiar, that’s because this second step greatly resembles the second step in the E1 reaction. As in the E1, only a very weak base is required to remove a proton adjacent to a carbocation.  The chloride ion (Cl– ) will do.

[Note: there are a lot of different ways to draw this, I’ve only shown one. See this footnote].

The final product here is chlorobenzene plus one equivalent of HCl. The FeCl3  is then free to react with another equivalent of Cl2 . In other words, it behaves as a catalyst in this reaction.

The same set of principles operate for electrophilic bromination. Here, the Lewis acids used are often FeBr3 or AlBr3. [Why not FeCl3 or AlCl3? Good question! See note below ]

The first step is activation of Br2, followed by attack and deprotonation, as before:

It’s essentially the same reaction as chlorination except with the halogens swapped out.

It’s also possible to iodinate benzene using I2 , but the activation step is  different.   Here, however, it turns out that a Lewis acid catalyst is not sufficient to make iodine an active enough electrophile to react with most aromatic rings.

Instead,  a stoichiometric amount of an oxidant is used to convert I2 to I+ . A common example cited is HNO3, which in the presence of additional acid (e.g. H2SO4) is a source of the very active oxidant [NO2]+ which converts I2 to I+ .  [see note below]

Once formed, the benzene ring then reacts with I+ in the two-step electrophilic aromatic substitution mechanism to give the new carbon-iodine bond.

The exact identity of “B” will depend on the oxidant used to convert I2 into I+ . A single equivalent of water will do the trick, for example.

In the next post we’ll cover two more important electrophilic aromatic substitution reactions: sulfonylation and nitration, and they will also follow this three-step pattern!

Note 2. Many other oxidants have found use in this reaction. Another is copper (II) bromide (CuBr2).

Note 3. It’s not that FeCl3 or AlCl3 aren’t strong enough to do the job here; the problem is that using Br2 in the presence of FeCl3 will lead to some scrambling of the halogens, resulting in a small amount of chlorination products. Using the bromide salts eliminates this problem. 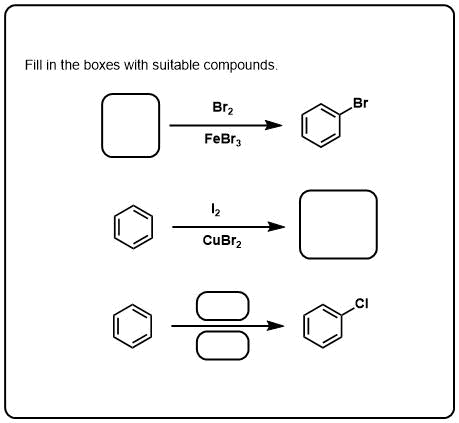 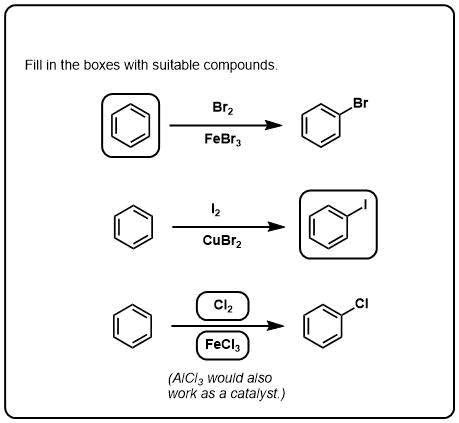 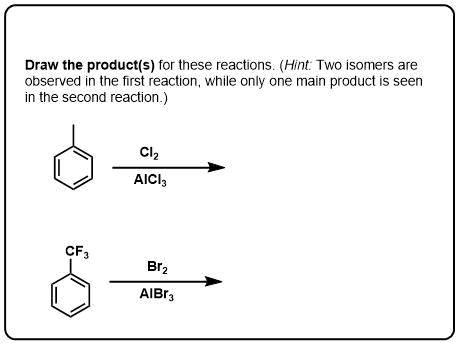 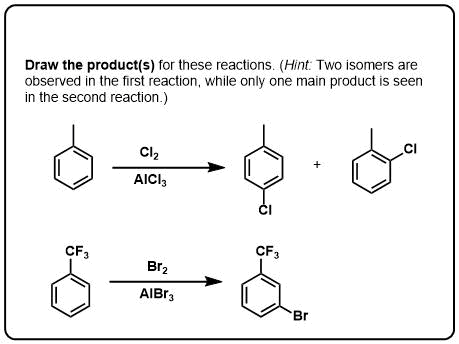 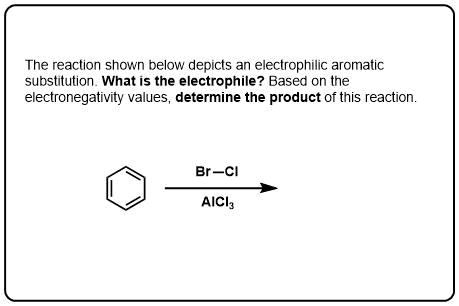 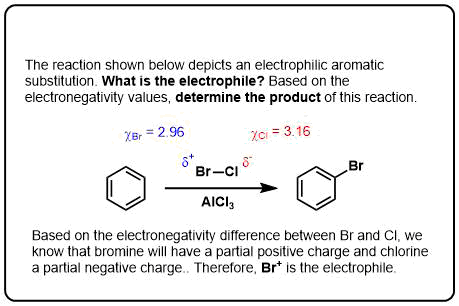 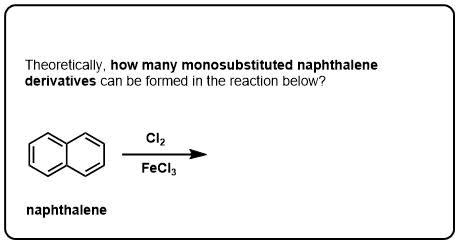 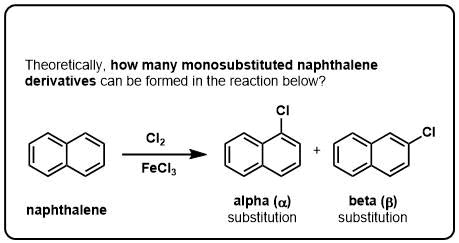 For more detailed references on the individual halogenation reactions (chlorination, bromination, iodination), consult the sections in the reaction guide. The references here are highlights.
Electrophilic aromatic fluorination is possible, and the last two papers describe that.