OK – so making amines through direct alkylation is generally not a great way to go. You could even say it’s crappy.

1. How Do We Make This Amine, If Direct Alkylation Doesn’t Work?

Say you have a primary amine such as benzylamine and would like to make N-methylbenzylamine. How do you do it?

Yes, you could try and separate out the secondary amine that’s formed from the tertiary amine, but we’re not going to settle for 10-30% yields here. Separating mixtures is fine on paper, but (trust me on this) it can be a real a pain in practice.  Is there another way to do it?

2. Reductive Amination To The Rescue

While alkylation can happen multiple times on an amine, imines only form once on a given amine. Once the imine is formed, the C=N bond can be reduced, giving us a new alkyl group attached to nitrogen.

This is a much more controlled manner of forming nitrogen-carbon bonds.

Here’s the mechanism for imine formation, in case you’ve forgotten. [click to see image]
After the imine is formed, it must be reduced to the amine. It’s possible to use the familiar reducing agent sodium borohydride (NaBH4)  for this process. You may recall that NaBH4 is used for the reduction of aldehydes and ketones.

There are two other commonly used reductants for reductive amination: sodium cyanoborohydride (NaBH3CN) and sodium tri-acetoxyborohydride (NaBH(OAc)3 ).  For our purposes, they can be considered to be the same. In practice, NaBH3CN is a little bit better than NaBH4.

[For a discussion as to why NaBH3CN tends to be a better choice than NaBH4, see this footnote. In the schemes below, we’ll use NaBH3CN, but NaBH4 and NaBH(OAc)3 can be considered to work just as well. ]

Reductive amination is extremely versatile and can be used to install a large variety of different alkyl groups on an amine. The nice part is that the groups just go on once.

The table below shows examples of how methyl, ethyl, propyl, butyl, and benzyl groups can be installed on an amine, by employing an appropriate aldehyde . (Note that reductive amination doesn’t work for installing a phenyl group. Why not?)

What about ketones? They work too! Employing a ketone will result in a branched alkyl substituent on the amine.   For example, using acetone in the following reductive amination gives an isopropyl group.

Importantly, the sequence of reactions isn’t crucial here. We could have done the first reductive amination with benzaldehyde first, and acetone second, and still obtained the same product.

Finally, there’s the intramolecular case, which always seems to give students a headache. If a molecule contains both an amine and a carbonyl, then it can cyclize to give a cyclic amine.

When drawing out the product of ring formation, I strongly advise counting and numbering your carbons. I’ve seen so many students make mistakes when redrawing that it’s well worth the time to double check that you haven’t left anything out.

It might take some time to appreciate, but reductive amination is an extremely powerful way of making amines.

It’s very helpful to be able to think backwards from an amine product to what the starting materials look like.

Look at the following tertiary amine. It is connected to three carbons, which we can label a, b, and c. Each of these N–C bonds could potentially be formed through reductive amination, since they have C-H bonds.

That means that there are three possible ways of making this amine through reductive amination, all of them acceptable!

In short, reductive amination is a very powerful and useful protocol for the formation of amines.

Think about it. Note that the carbon attached to the nitrogen doesn’t have a C-H bond. Therefore we can’t work backwards to the reduction of a C=N bond with a hydride source.

One must resort to alternative techniques. Buchwald-Hartwig cross coupling is one of them.

NaBH4 can be a perfectly acceptable reducing agent for reductive amination.

There’s one slight problem with this reagent, however.  What if the NaBH4 ends up reducing the aldehyde or ketone before it has a chance to react with the imine? That would lead to lower yields. [In practice, this can be reduced somewhat by giving the imine sufficient time to form, and then adding in NaBH4.

An even better approach involves the use of the slightly weaker reducing agent sodium cyanoborohydride (NaBH3CN).

Why use a weaker reducing agent?

Recall that formation of an imine is best done under mildly acidic conditions (pH 4 or 5). [At mildly acidic pH, the carbonyl oxygen is protonated, speeding up the rate of addition to the carbonyl carbon; if the solution is too acidic, however, the amine nucleophile will be converted into its (non-nucleophilic) conjugate acid, an ammonium salt, and no reaction will occur.]

Once the imine forms at pH 4-5, some of it will be converted into its conjugate acid, an iminium salt.

The advantage of using NaBH3CN is that it isn’t a strong enough reducing agent to reduce aldehydes or ketones, but it is a strong enough nucleophile to reduce iminium ions. Therefore more of the starting aldehyde/ketone will be converted into the amine. [This is particularly important when working with very precious samples of aldehyde]. 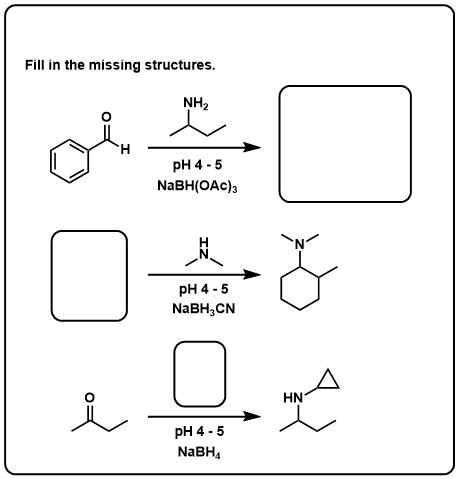 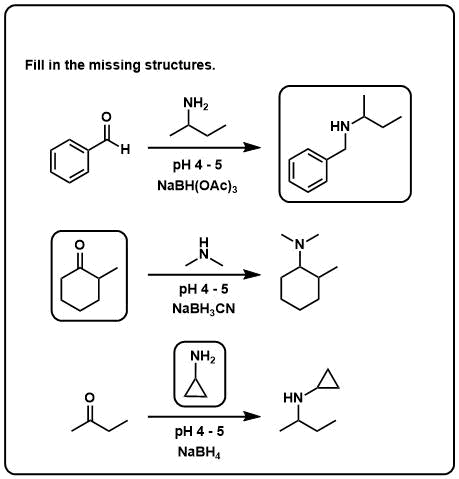 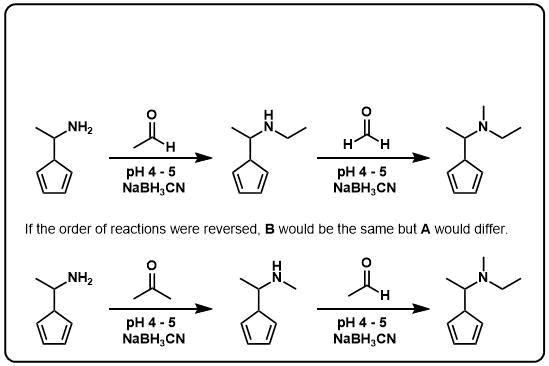 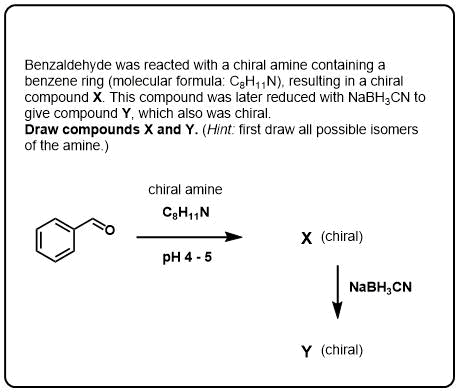 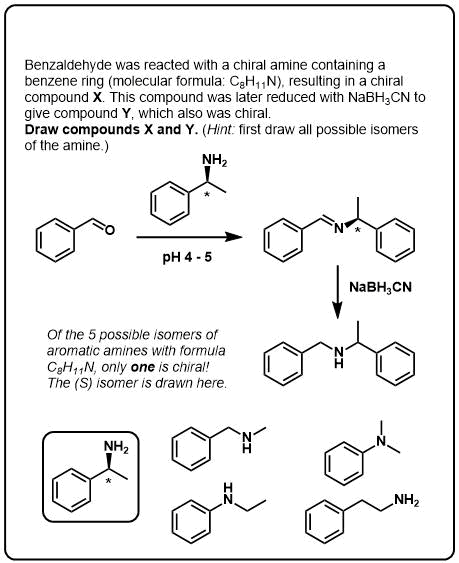