Here’s what we’ll talk about today: reagents for the oxidation of alcohols.

1. An Oxidation Reaction Forms C–O and Breaks C–H On the Same Carbon

Here we are, at least  fifteen articles into this series on alcohols, and all we’ve really talked about is substitution and elimination reactions, with a little bit of acid-base chemistry mixed in.

We haven’t even scratched the surface of one of the most important classes of reaction for alcohols – one that becomes crucial as you move into Org 2.

What do I mean by an “oxidation reaction”, anyway?

[  No, “Eye of newt” doesn’t actually do oxidation reactions: I’m being a bit coy with exact reagents for now, because as I’ll explain in a bit, there are so many different reagents for oxidation of alcohols that many students get spooked by the fact that they look unfamiliar  and fail to actually pay attention to the important part: the bonds that form and break in the reaction!  ]

The key process here is that we’re forming a C-O bond and breaking a C-H bond on the same carbon. That’s a sure sign of an oxidation reaction. For more background on oxidation reactions in organic chemistry, check out this previous post [  Quick summary: compare oxidation states in carbon to those in transition metals. Essentially we’re trading a bond between carbon and an atom less electronegative than carbon (H) for one more electronegative than carbon (O). If you think back to Gen Chem and transition metal oxidation states, this would correspond to an increase in oxidation state].

2. Another Oxidation: Secondary Alcohols To Ketones

Here’s another example for you. Starting with a secondary alcohol, we throw in some “wing of bat”, and voila!  We end up with a ketone!

Now let’s look at this third reaction, where we break out some very precious “powdered unicorn horn”.

That powdered  unicorn horn is powerful stuff! When we count the bonds formed and broken, notice that we formed two new C-O bonds and broke two C-H bonds. In other words, using this one reagent resulted in two oxidations at the same carbon!

Note, however, that our magic unicorn horn only performs one oxidation on secondary alcohols, giving us a ketone (just like, the previously described “wing of bat”)

4. Tertiary Alcohols Do Not Undergo Oxidation

Finally, just so tertiary alcohols aren’t left out, let’s see what happens when they’re treated with any one of our magical reagents.

Nothing! Eye of newt, wing of bat, powdered unicorn horn – no matter how powerful, none of them are able to oxidize our tertiary alcohol.

Why is that?  If you look closely, there’s no C-H on the carbon of the tertiary alcohol and no oxidation occurs. We would have to break a C-C bond in order for an oxidation to occur, and none of these reagents are competent to do this [for a clue as to why, see the next post]

[BTW: that carbon of an alcohol attached directly to C-OH is sometimes called the “carbinol” carbon]

5. Climbing The Oxidation Ladder, One Or Two Rungs At A Time

Let’s organize all of these reactions into a table. In one of the most powerful analogies in organic chemistry, imagine we have a “ladder” of oxidation states for carbon. Alcohol is at the bottom of our miniature ladder here, and each oxidation goes a step up [we say “oxidize up” because we’re increasing the oxidation state, i.e. making it more positive].

One step “up” from a primary alcohol is an aldehyde, which we showed in example 1.

Two steps “up” from a primary alcohol [and one step up from an aldehyde] is a carboxylic acid, which we showed in example 3.

One step “up” from a secondary alcohol is a ketone, which we showed in example 2 and also with a “stronger” oxidant in example 3.

And in example 4 we showed that oxidation “up” from a tertiary alcohol isn’t possible even with the help of these “magical” reagents we’ve been using.

By the way, shouldn’t there also be a step “up” from a ketone? Yes – it would be an ester [shown in grey]. But none of the reagents we’ll talk about here are capable of climbing this rung of the ladder [again, it would involve breaking a C-C bond].  Later on, you might learn about a special way to do it [spoiler here] which we’ll discuss when we go through reactions of ketones.

6. “Weak” Oxidants Oxidize Primary Alcohols To Aldehydes, and Stop There

Now we’re going to stop being so silly and get to specific reagents instead of talking about “eye of newt”, “wing of bat”, and “powdered unicorn horn”.

But first, here’s a useful distinction to make in keeping track of oxidizing agents.

Some oxidants will react with primary alcohols to give aldehydes, and stop there. Let’s call these “weak” oxidants.

They don’t go on to the next “rung” up i.e. carboxylic acids.

It’s a bit of an oversimplification [note 1] but it will do for our purposes.

Examples of this are pyridinium chlorochromate (PCC), Dess-Martin Periodinane (DMP), the Swern oxidation [(COCl)2, DMSO, NEt3)] and CrO3/pyridine (the “Collins reagent“) all shown below. There are many, many more oxidants that will do this transformation than those I just mentioned; these are merely the reagents encountered most often in undergraduate courses.

As mentioned, these oxidizing agents will also convert secondary alcohols to ketones.

A second class of oxidants are more vigorous. They will convert primary alcohols to carboxylic acids [two steps “up”] in one flask.

[I’ve written before that H2CrO4  is one of the most annoying reagents in organic chemistry, because it has so many potential precursors spread throughout different textbooks. K2Cr2O7, Na2Cr2O7, Na2CrO4, K2CrO4, CrO3/H3O+, Jones reagent – they’re all essentially the same thing, at least for 0ur purposes. ]

They will also oxidize secondary alcohols to ketones (and stop there).

And like I said earlier, neither strong nor weak oxidants will oxidize tertiary alcohols.

Let’s make a table, shall we? This is the “bottom line” for this post.

•None of the reagents we’ve encountered will oxidize tertiary alcohols.

Next time – How Oxidation Reactions Work

So how do these mysterious reagents work, anyway?

Reagents for oxidation of alcohols was one of those things that made me feel really dumb when I learned organic chemistry.  The reagents that were given to us might have well been “eye of newt” and “powdered unicorn horn” since they were introduced without any background or context and disappeared just as quickly after the section on oxidation was over.

It was only later that I understood that oxidation is not nearly as complicated as these weird reagents make it  seem. In fact, the underlying process is in most cases extremely familiar – it’s just not taught that way!

Note: it’s an oversimplification because the first step in oxidation of an aldehyde is generally addition of water to form a hydrate, which is then oxidized to the carboxylic acid. Some oxidants we call “weak” (e.g. CrO3, pyridine) can thus be “strong” if water is present. It’s a teaching kludge, but good enough for our purposes, for now. 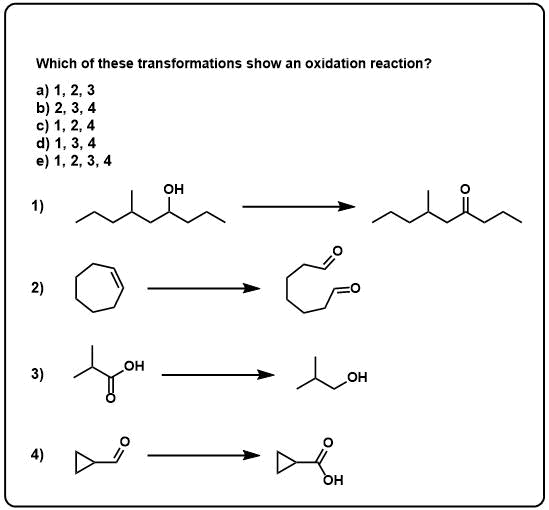 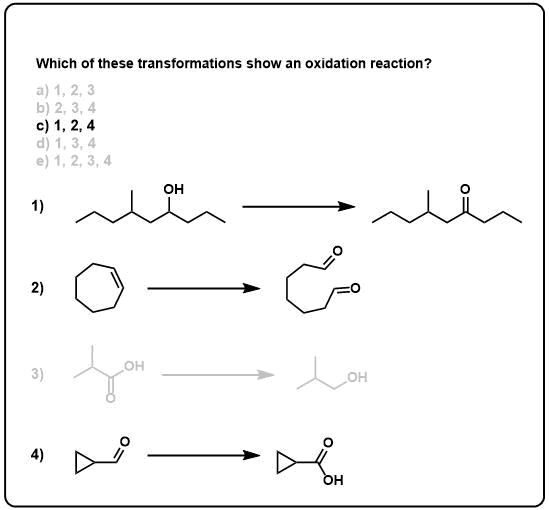 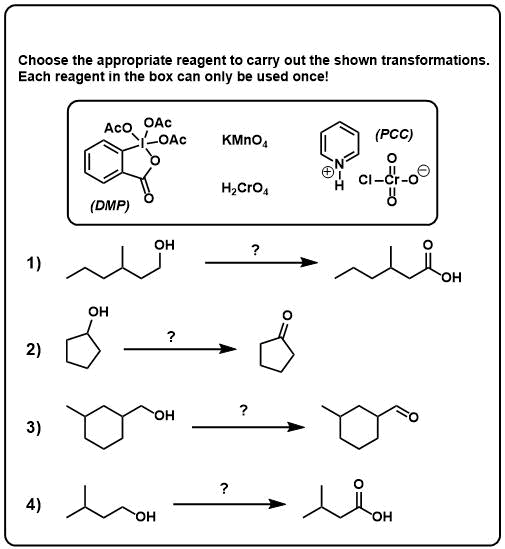 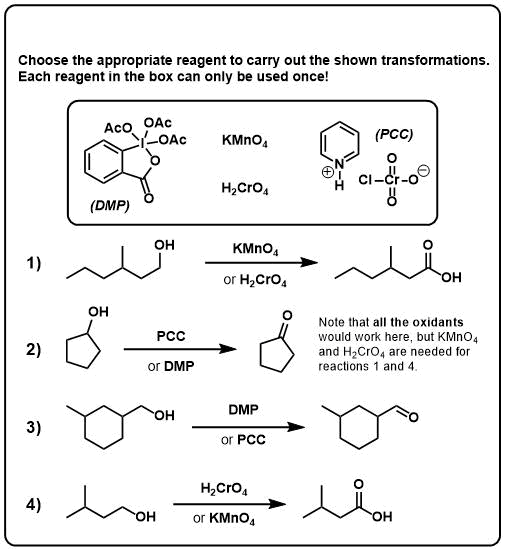 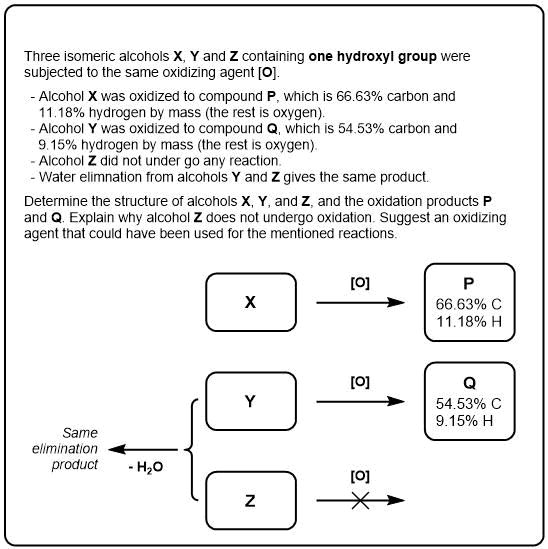 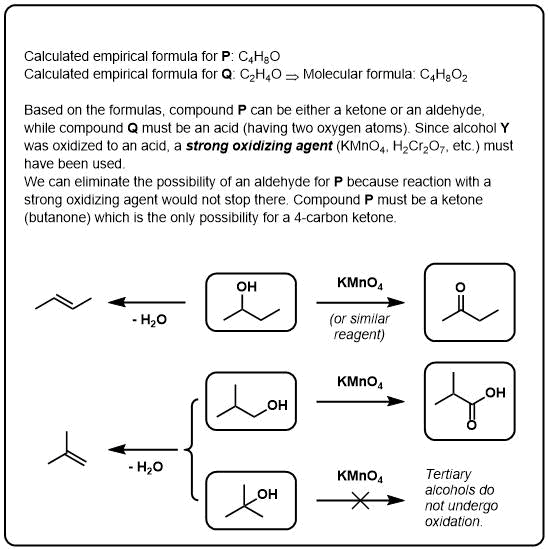