Now that we’ve covered some of the most important reactions of Grignard reagents, it’s time to actually apply this knowledge to practical matters. And by practical matters, I mean synthesis. After all, the point of learning each of the reactions in organic chemistry is that they’re useful tools for forging and breaking certain bonds. Just like a carpenter might use a hammer, nails, screwdrivers and various saws to build a table, organic chemists apply the “tools” of organic reactions toward some kind of goal – building a molecule from simpler components, for example.

A skilled carpenter can imagine a finished table and then think backwards to what tools to use to build it from simpler parts. Similarly, organic chemists must be able to envision how a complex molecule can be made through a sequence of  reactions.

In this post, we’ll  go through three exercises that show how we can “think backwards” from the product of a Grignard reaction to its starting materials.

So let’s get started!

Break it down into parts, of course! We’ll tackle A, B, and C in turn.

First, we’ll look at what we know about Grignards in the forward direction, and then use that information to work backwards. To take a simple example, if you know that 3 + 4 = 7, then you can work backwards to figure out what number must be subtracted from 7 to give you 3.  It’s the same idea, as we’ll see.

Here’s three key reactions of Grignards we learned in a previous post: addition to aldehydes, addition to ketones, and addition to esters.

Note that in each case we’re forming C-C and breaking C-O  as well as forming O-H. In the case of the ester, the Grignard actually adds twice – a point that’s important for planning, as we’ll see.

Now let’s ask: what if we were to wave a magic wand, and make this reaction act in reverse? What bonds would form and break?

We’d be breaking C-C and O-H, and forming C-O (π). Since this isn’t a “real” reaction, we use a special open-ended arrow called a “retrosynthesis arrow” to show that this is a “planned” reaction rather than an actual one.

Getting back to that earlier comment about subtraction: if you know that

and are then asked “what number must be removed from 13 to give 5 ?”

Of course, you’re very familiar with subtraction by now, but your 1st grade self probably started by thinking it was tricky. Likewise, working backwards in the context of chemical reactions is a new thing for many people. It takes practice to apply!

Getting back to 2-pentanol: as you might have noticed, there’s actually 2 ways to go about looking at this reaction in the reverse reaction, since there are two different C-C bonds (let’s call A and B) that we could break to give an aldehyde and a Grignard.

Breaking bond A (retrosynthetically) gives us butanal and methyl Grignard.

Breaking bond B (retrosynthetically) gives us ethanal and propyl Grignard.

After each Grignard reaction we need to do a mildly acidic workup so that we end up with the neutral alcohol. So in the forward direction we can go:

[See that I switched something around there: I made the second Grignard derived from Cl instead of Br . Whether your Grignard is Cl, Br, or I doesn’t matter – they all work fine].

Ready for another one? Let’s look at B.

The first observation to make here is that the C attached to OH is itself attached to 3 carbons, so it’s a tertiary alcohol.

Going back to what we saw about the reactions of Grignards, we can suppose that this might be made through the reaction of a ketone with a Grignard reagent.

In the previous case, there were 2 different ways to make 2-pentanol. Here, there are three, because we could either break bonds A, B, or C in the “reverse” direction to give us one of 3 different combinations of ketone and Grignard reagent.

All are equally OK! Just for clarity, let’s look at each of them in the forward direction.

Again, I mixed up the halides with the Grignards here, just for variety. You might also see many different (equivalent) workup conditions for Grignard reactions. As long as they result in protonating the intermediate alkoxide to give the alcohol, they’re fine.

Now you might be asking: reactions of Grignards with esters also gives tertiary alcohols. Why can’t we use this here?

The problem is that there are 3 different R groups on the tertiary alcohol. Recall that Grignards add twice to esters. Therefore, if we were to plan to use a Grignard reaction with an ester to make a tertiary alcohol, we’d need at least 2 identical R groups to be present. The bottom of the image gives some examples.

That bottom example also happens to be a good answer to question C, by the way.

C can be made through either addition of cyclohexyl Grignard to an ester, or by 2 different combinations of ketones and Grignard reagents. [Can you find them? Answer below].

That’s one of the interesting things about synthesis – there are often many different ways to go about solving the same problem. In that respect, it’s also a bit like carpentry: even two different carpenters building the same table might use a slightly different sequence of events to make the same thing.

In introductory organic, we don’t get too picky about whether you pick the most efficient synthesis of a molecule. The key is just being able to get there.

This is yet another reason why I harp on “what bonds form, what bonds break?” as the most important question you should ask yourself when you learn a new reaction.

In the next post we’ll look at a few more Grignard synthesis problems, but throw in a new twist – a reaction of alcohols we’ve already learned about called  oxidation. This will allow us to build up even more complex products from simpler precursors using the Grignard reaction.

Note: the answer to how to make C from the reaction of a ketone with a Grignard reagent. 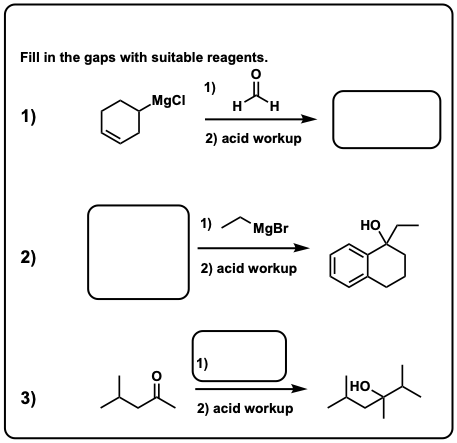 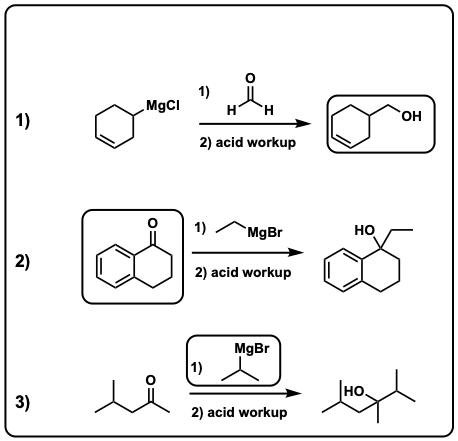 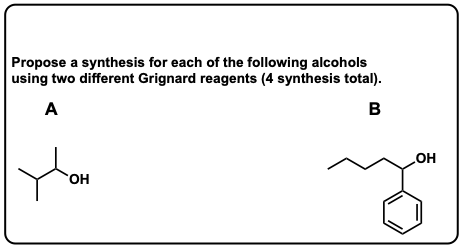 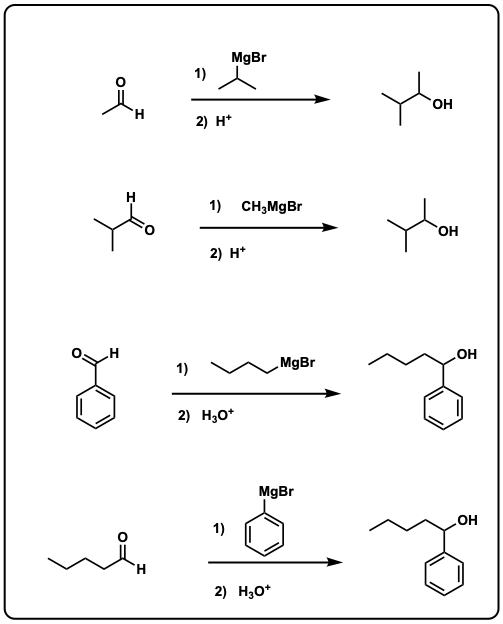 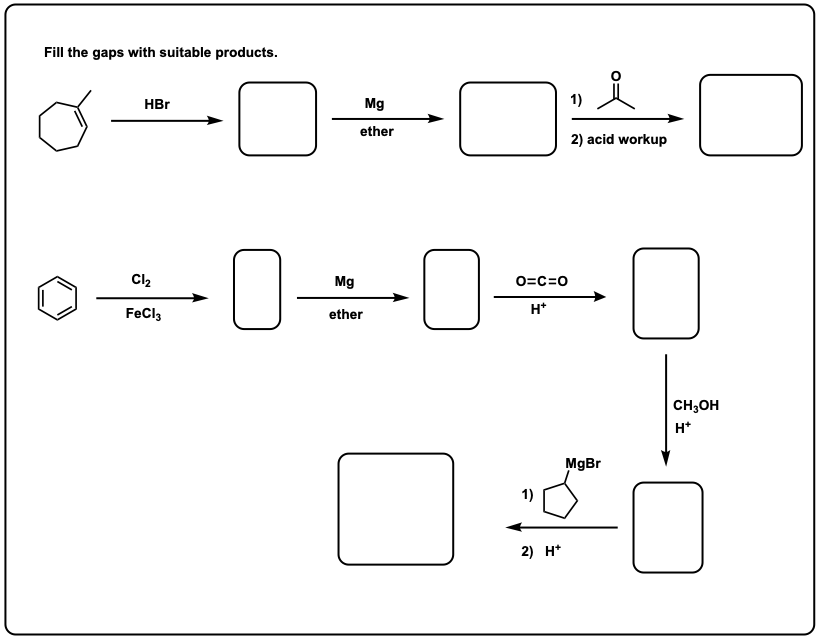 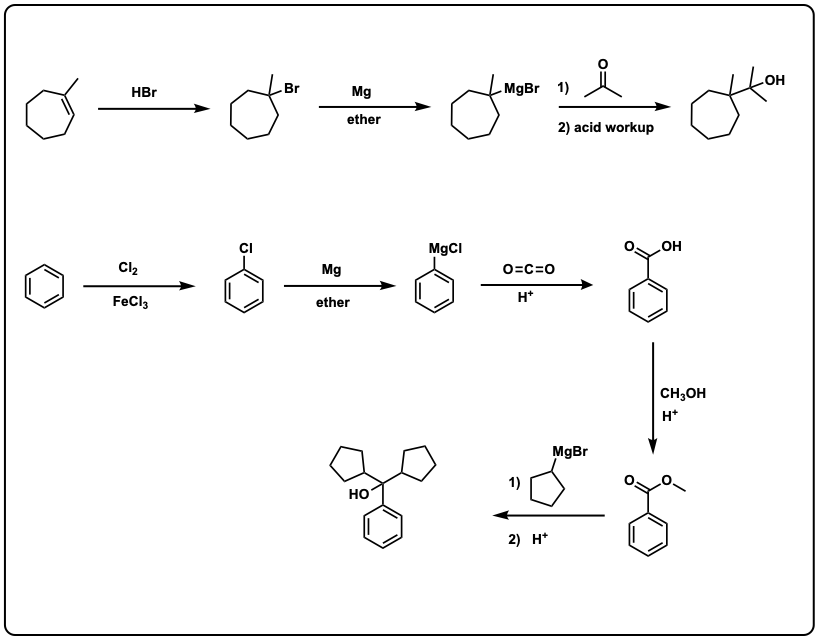