At the beginning of this series I said that the fact that carbon can form rings leads to all kinds of interesting consequences. We’re going to see many examples of that in our post today!

So far, we’ve only talked about cyclic molecules containing one ring. But, of course, molecules with multiple rings are very common in nature. A prime example is the steroid structure, exemplified by the common oral contraceptive ethinyl estradiol.

Here, we’re just going to talk about two very simple cases of molecules containing two rings. We’re going to focus our efforts on cyclohexane, and examine in close detail the situation where two cyclohexane rings are bonded to each other in the most common way – with the two ring junctions (“bridgeheads“) on adjacent carbons, a situation we refer to as fused rings.

The parent molecule is called “decalin” since there are ten carbons in total. However, remember that any time we have two substituents on a cyclohexane ring (as we do here), it is essential to draw in the stereochemistry in order to avoid ambiguity! Two stereoisomers are possible here: one where the hydrogens at both ring junctions are “cis”, and the other where they are “trans”.

These molecules look so simple when we draw them on paper!  What could be simpler than two hexagons joined together?

Well, just like with cyclohexane itself, the complexity comes when we examine their most stable three-dimensional structures. Each six membered ring will adopt a chair conformation. Believe it or not, the cis and trans stereoisomers of decalin have remarkably different shapes.

There’s no better way to see this than by making a model.

2. A Model Of cis-Decalin Shows It Has A Tent-Like Shape

Here’s cis-decalin. The hydrogens on the “bridgeheads” are highlighted in red and white. Notice how both cyclohexanes are in chair conformations, but the molecule adopts almost a tent-like shape.

3. A Model of trans-Decalin Shows It to Be Flat

And here’s trans-decalin. As we look at the molecule from an angle, it’s obvious that both cyclohexane rings are also in the chair conformation, but the molecule is much flatter overall.

4. Why Is trans-Decalin More Stable than cis-Decalin? All Carbons Are Equatorial

As these movies show,  changing the stereochemistry of the bridgehead carbon from a “wedged” H to a “dashed” H can make a huge difference in the overall shape of the molecule!

Let’s look at these two molecules in a bit more detail.  First of all, which one should be more stable, cis-decalin or trans-decalin?

First of all, let’s look at line drawings of each of these molecules. When we do so, we notice that in trans-decalin, all carbons are equatorial, whereas in cis-decalin, one carbon is equatorial and the other is axial.

Based on the (safe) assumption that the A-value of the axial group should be about 1.75 kcal/mol, we can therefore make a judgement about the relative stability of these two molecules.

Just to nail the point home, when we look at cis-decalin from the side, we see the two gauche interactions (each worth about 0.9 kcal/mol) that are responsible for this increase in energy (this is a screenshot of the cis-decalin “flyover” video, above)

OK. So we’ve established what cis and trans decalin look like, and which are more stable – but hold on, you might say. What about ring flipping? Does that change anything?

Let’s look at cis-decalin first. We have one group equatorial and one group axial. If you said that a ring flip on this molecule would lead to a conformer exactly equal in energy, you are correct!

What about trans-decalin?  Shouldn’t a ring flip convert both equatorial groups to axial groups, and therefore be higher in energy?

In theory, it’s reasonable to think, “yes”  – and in situation where we’re dealing with rings larger than 8 or so, that is what happens. However, this is a prime example of an unexpected consequences I was talking about earlier.

It turns out that a ring flip in trans-decalin isn’t possible because it would lead to too much ring strain.   To use an analogy, the reason why trans-decalin can’t do a ring flip is a bit like why you can’t touch your nose to your spine – there just isn’t enough flexibility to do so without putting yourself in tremendous pain.

A different way of saying the same thing is that trans-decalin is locked in position.

In the next post we’ll talk a little bit about some  other situations that arise when we have molecules with multiple rings.

Note 1.  The ‘tent-like’ shape of cis decalin (see pic below) has a further important consequence that has been exploited by clever organic chemists for decades. The two faces of cis-decalin are not equivalent. The top face is more “exposed” to the surrounding environment than is the bottom face – in other words, a molecule encounters much less steric hindrance in approaching the top face than it does the bottom face (note how crowded the underside is). 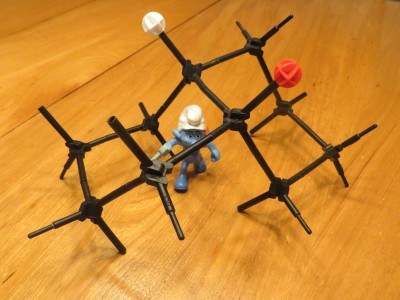 An example will serve to illustrate.

Imagine that we have a decalin with an alkene. There are plenty of useful reactions of alkenes, as we talk about in this series.

To take one example, we can form an epoxide by treating an alkene with a peroxyacid such as m-chloroperoxybenzoic acid.

If we have a decalin with an alkene, such as the molecule shown below,  one face will be more reactive than the other because it is more accessible [in order to react at the bottom face, the peroxyacid would encounter significantly more steric hindrance].

For  a classic example of how this can be used in target molecule synthesis, see Woodward’s synthesis of reserpine.