Note from James: This is a guest post by Leah Fisch of Leah4Sci.com , an online resource for learning organic chemistry, MCAT preparation, and other science topics . This is an epic, comprehensive post on  organic chemistry IUPAC nomenclature. You might want to bookmark this page for future reference, and be sure to visit Leah’s Youtube Channel for more videos on nomenclature as well as other organic chemistry topics. Leah also tutors MCAT and organic chemistry. Her tutoring page is here. 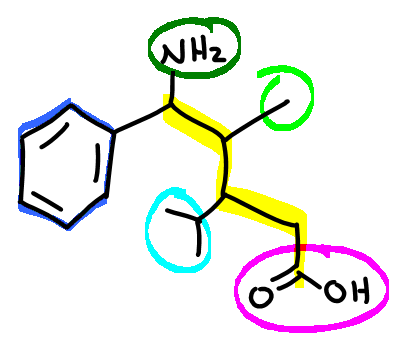 1. Why nomenclature is so important for organic chemistry students

Much of organic chemistry is about reactions, mechanisms and products. But you will be asked about nomenclature every step of the way.

Knowing how important your naming skills are to this course, you need to come up with a simple yet logical approach to naming even the most complex organic compound while taking into account all the different molecular prefixes, chain types, substituents, functional groups and more.

If I told you that I met a woman with a 4-part name and asked YOU to put the parts in order, I bet you’d get it on the first attempt.

Does your attempt look like this: Miss Jane Doe Jr ?

How did you get it right on the first shot?

I’m guessing it’s because you have an inherent understanding of the human naming system.

We all have a first and last name.

Some people have a prefix such as Miss, Doctor or Sir.

And some people have a suffix such as Jr, Sr, or III

And so your simple approach is as follows: When you come across a complex molecule with multiple components to name, identify each one individually. Put its name on a list then view the list items as a puzzle that must be put together in a logical sequence.

3. A Word About Line (Skeletal) Structure Before We Begin Naming

When learning and practicing nomenclature you will find yourself drawing molecules over and over again. While Lewis structure may appear easier to read at first, you may put your sanity at risk having to draw out hundreds of C, H, and O atoms.

Instead, I recommend that you get used to drawing in line structure – also called skeletal structure or bond-line notation. This method is both faster to draw and easier to read. This entire tutorial will be illustrated in line structure. If you are not yet familiar with this method then I urge you to study the short video below.

4. The Highlighter Trick for Identifying the Parent Chain

Let’s refer back to Miss Jane Doe Jr. While she has four parts to her name, you can easily get away with just referring to her as Jane Doe. This is her ‘core’ name or her ‘parent name’.

The core skeleton of an organic compound is called its parent chain. This refers to the simple skeleton or backbone of the molecule, upon which all the functional groups and substituents are attached.

This is the first component to name and identify.

The highlighter trick is a trick to help you determine if a chain is continuous or not.

Count the number of carbon atoms after identifying and highlighting your parent chain. I recommending actually numbering your molecule. This is a good habit to develop NOW as it will provide a reference point later on when you have to name multiple substituents and functional groups.

You will assign a first name to your molecule based on the number of carbons present in the parent chain as follows:

Now that you have a first name, you need a last name too. The last name comes from the saturation of the parent chain, specifically the presence and location of double and triple bonds.

These molecules fall into 3 categories:

An alkane is a saturated molecule which does not contain any double (pi) bonds.

An alkane has a last name of ‘ane‘

An Alkene is partially unsaturated and contains a least one double or pi bonds.

An alkene has a last name of ‘ene‘

An Alkyne is the most unsaturated and contains a triple bond. This is 2 pi or double bonds between the same 2 carbon atoms.

An alkyne has the last name of ‘yne‘

When numbering a molecule with just  Pi  bonds, your goal is 2-fold:

Let’s apply these rules by naming the 3 compounds pictured below:

This molecule does not contain any pi bonds. We can number from the right or left for a total of 5 carbons.

Molecule A is named pentane.

Molecule B contains a single pi bond in the middle of the chain. We have the option of numbering from the right or the left given that the pi bond will be between carbon 3 or 4 from both directions. I’ve designated this in red and blue to help you see this clearly

In both scenarios the pi bond occurs between C3 and C4. The pi bond is numbered as ‘3-ene’ given that carbon 3 is the lower of the two numbers containing the double bond.

There are two ways to put this name together. Most professors will accept both. Ask your professor which method is preferred to ensure that you don’t lose any quiz/exam points.

Notice that for the second version I pulled the number 3 to the front of the molecule. I like this method since it sounds nicer and flows better.

Molecule C is a terminal alkyne meaning it has a triple bond at the very start of the molecule. Since the alkyne does not have any substituents, the end of the chain with the alkyne becomes number 1.

8. Substituents Arise When the Highlighter Trick Fails on the Branches

If only nomenclature ended as above with just a first and last name. But alas, simple doesn’t really exist in organic chemistry. So let’s build on this foundation and add puzzle piece components to our so far logical approach.

9. If it Sticks Out – It’s a Substituent

These atoms or groups of atoms are considered your substituents, and represent the prefix ‘Miss‘ for Miss Jane Doe. The most common simple substituents include halogens and short carbon chains.

To Name a Halogen Substituent

To name a halogen substituent such as F, Cl, Br, I – drop the ending of the halogen name, and replace with ‘ide’. 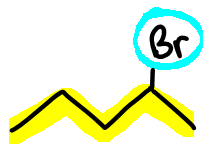 For example, a 2-carbon substituent is named as follows:

When more than one of the same substituent occurs, you have to use a new prefix to designate how many are present as follows: 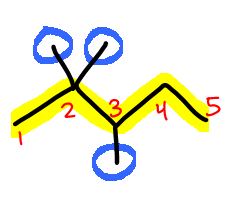 Panic usually sets in when multiple types of substituents occur on the same molecule.

And certainly don’t try to name the entire compound in one shot.

Instead, write out your puzzle pieces one at a time. In my Organic Chemistry IUPAC Naming videos  you will notice that I mark off every component as I address it, by highlighting chains or circling substituents.

Let’s apply this approach to a simple multi-substituted compound pictured here. Then follow the puzzle piece approach as follows:

‘di’ indicates that there are 2 groups.

2,4 indicates the carbon atom where each methyl group occurs.

Now that we have a simple list of substituents – let’s put it all together. We have no functional group (last name) and so we follow the pattern of

But we have a problem.  There are two sets (not one)  of substituents present.

When faced with more than one type of substituent, order them alphabetically.

While it appears that dimethyl should precede ethyl, (d before e)  it’s actually the other way around.

The ‘di’ in dimethyl is an adjective and is not counted for alphabetical order.

Instead we look at the ‘m’ in methyl and ‘e’ in ethyl. Since ‘e’ comes before ‘m’ ethyl comes before dimethyl.

The prefix ‘iso’ is an exception to this rule and will count as ‘i’ when considering alphabetical order.

Remember that with pi bonds you have the option of pulling the pi-bond number before the parent or first name.

This gives us two correct answers:

I personally think the second version flows better but be sure to find out which version YOUR professor prefers.

Two more quick rules on the above:

Now that you’re comfortable naming substituents, how do you name a molecule that has a substituent ON ITS SUBSTITUENT?

In other words, how do you name a branched branch?

The bad news: this process is tedious.

The good news: There is an acceptable shortcut.

You are more likely to be tested on the acceptable shortcut and so I won’t go into the tedious method here. However you can catch the complete explanation and correlation on my branched chain substituent video below:

Who Doesn’t Love a Shortcut?

There are 4 very common branched substituents that you will see again and again in your organic chemistry course. Since these branches are isomers of straight-chain substituents, they will be named as an isomer of the substituent they represent.

When you see ‘R’ anywhere on your molecule, recognize that this represents the Rest of the molecule. However, to keep things simple, and given that we are not looking at that portion of the molecule, just cut it all out and draw ‘R’ in it’s place. For the purpose of branched substituents, ‘R’ will represent the invisible parent chain.

A propyl substituent has a single isomer as pictured.

Propyl is a 3-carbon substituent. When connected in sequence (in a line) we simply call it propyl, however, when connected to the parent chain by the second instead of the first carbon, it gets the name ‘isopropyl’.

Iso is a group that you will see again later so recognize that an ‘iso-tail‘ is like a mermaid’s tail or fork in the road.

A butyl substituent has four carbons in a row. With more carbons we get more isomer opportunities, in fact, butyl has a total of four isomers as follows:

Visit This Table Of Functional Group Priorities for a quick review on functional group priority and appropriate last names.

16. Putting It All Together: A Practice Example

But let’s try a quick example. Here we have a 5-carbon chain with a CH3  functional group and CHO at the end.

We break this down as follows:

Note that terminal functional groups such as carboxylic acid, aldehydes and more are implied to be on the first carbon and thus requires no numerical designation.

One final adjustment. Since ‘al’ starts with a vowel and ‘ane’ ends in a vowel, we drop the ‘e’ in ‘ane’ allowing the name to flow better for a final name of 4-methylpentanal