Oxidation and Reduction in Organic Chemistry 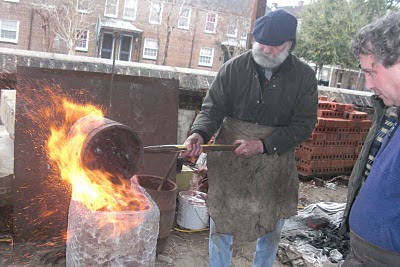 In the beginning, the term actually made sense. When the alchemists and medieval metallurgists started doing experiments to quantify exactly how much iron, say was formed from the smelting of a given amount of iron ore, they found that the weight of the solid iron was always less than that of the ore.

Given the decrease in mass, a sensible name for the process was made: reduction.

Later on, Scheele,  Lavoisier and Priestley independently discovered that the loss of mass was due to the expulsion of an element named (by Lavoisier) oxygen, and subsequent burning the metal in air led to its recombination.  Hence, “oxidation”.

Then came a general understanding of how atoms are composed of a positively charged nucleus and negatively charged electrons, and the introduction of the formalism known as the “oxidation state“, which is the hypothetical charge that an atom would have if all bonds to atoms of different elements of different elements were 100% ionic. It also works for ions, of course. So here’s the same reaction. See how oxidation leads to removal of electrons, and reduction leads to a gain of electrons.

That was about 70 years ago.

This also happens to be the first definition of oxidation and reduction I first learned in high school. When this was introduced in class, my first question – which is still asked by many students today, was:

“In what world does it make sense to call a process where electrons are gained “reduction” ? “

The answer from my high school chemistry teacher was , “well, you’re reducing the oxidation state – making it more negative”. Which was a very clever answer, completely jettisoning the inconvenient historical definition in favor of a simplistic mathematical one. Fortunately for him, I wasn’t fast or clever enough to counter with “then why isn’t “oxidation” called “addition”? (Feel free to use this yourself, however).

Result: I just memorized that “reduction” meant “adding electrons” and “oxidation” meant “removing electrons”.  Which came in handy in general chemistry, with its seemingly endless balancing of complex redox reactions.

Just when this seemed settled in my mind, along came organic chemistry, with what was seemingly yet another way of defining oxidation and reduction.  Agh!!!

At first glance, this seems a long way away from the Gen chem definition of oxidation being loss of electrons and reduction a gain of electrons.

Let’s look at those examples again (putting in an extra example for fun), paying attention to the change in oxidation state.

So is there a quick way to figure out if a carbon is being oxidized or reduced? Why yes there is.

All of these events affect the oxidation state of the carbon, and this ties back to the concept of oxidation that I originally learned in high school: keeping track of the gaining (and losing) of electrons.

When I finally understood this I was happy to note that the term “oxidation” finally made sense again.

“Reduction” still didn’t, but I learned to live with it and moved on.  You will too.

19 thoughts on “Oxidation and Reduction in Organic Chemistry”