What are the key factors that determine whether a molecule is antiaromatic?

It is similar to the requirements for aromaticity, except for one key factor (in red).

In our previous posts in our series on aromaticity [intro to aromaticity], [rules for aromaticity], we saw that aromatic molecules are unusually stable. They have particularly large resonance energies, tend to undergo substitution rather than addition reactions, and have delocalized pi electrons (all the C-C bond lengths in benzene are equal, for example).

In order to be aromatic, a molecule must possess the following four structural characteristics:

If these four conditions are met, the molecule is aromatic.

If it flunks even one question on the test, it’s non-aromatic.

That seems to be pretty clear. Or is it?

You might guess from the way I’m framing this question that the answer is “not quite”. : – )

1. Spectacularly Unstable Molecules That Form A Category Unto Themselves: “Anti-Aromatic”

Here’s the thing. There’s a small number of molecules that flunk the aromaticity test that aren’t just non-aromatic: they have the property of being so spectacularly and unusually unstable and difficult to isolate that they deserve another name.

We call these molecules “anti-aromatic“.

What’s interesting is that in many cases the molecules themselves don’t look to be particularly unstable from first principles, in contrast with, say, cubane.  Funny enough, you can buy cubane (more or less) from Aldrich, but most of the anti-aromatic molecules we’ll discuss below are only stable at extremely low temperatures – if they can be isolated at all!

Let’s start our journey down the rabbit hole with a simple example that should seem familiar from first-semester organic chemistry.

The cat that leaves the comfy chair first? (see post: The SN1 Reaction)

Quick review: Start with an alkyl halide. Leaving group leaves, forming a carbocation. Nucleophile attacks. It’s called the SN1 because the rate-determining step (carbocation formation) is unimolecular. Bottom line: the more stable the carbocation, the faster the reaction proceeds. Hence, the reaction rate for alkyl halides is tertiary > secondary > primary, and the carbocation gets special bonus points if it’s stabilized by resonance.

From everything you’ve learned so far, you’d expect the answer to be B).

The answer is that reaction A) happens faster. Reaction B does not happen at all. [Note 1]

This should strike you as deeply weird.

How is it that this supposedly resonance-stabilized carbocation is less stable than a secondary carbocation?

After all, how many times is it drilled into your head that resonance stabilizes molecules, especially carbocations?

But here, it seems to be destabilizing.  It’s… it’s… 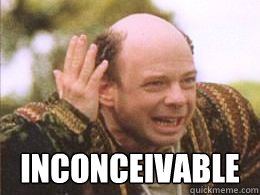 Another class of “elusive” molecules is a family of three-membered rings.  You might recall from Org 1 that it’s easy to make epoxides from alkenes using an oxidant like m-CPBA.

Did you ever wonder why we never covered the same reaction for alkynes?

Well, it’s not for lack of trying.  Chemists have tried all kinds of methods for epoxidizing alkynes, and you know what? The reaction just doesn’t frickin’ work.

For instance, epoxidation of acetylene would give the molecule below (oxirene).

Oxirene itself has never been observed, although there are tantalizing traces of its fleeting existence.   And by the way, neither has the nitrogen analogue,  1H-azirene, or the thiirene.   [Note 2]

Why not? What’s special about each of these cases?

You might notice that, like the cyclopentadienyl cation, these molecules are cyclic, conjugated, flat, and have 4 pi electrons (two in the pi bond, and two from a lone pair).  [Note 3]

OK. What else might be cyclic, conjugated, flat, and have 4 pi electrons?

Cyclobutadiene looks like a simple enough molecule, but it wasn’t actually synthesized until 1965. And even then, it was found that it isn’t stable at temperatures above 35 Kelvin. [Note 4]

The question is, why?

Sure, it’s a four-membered ring, and yes, it has a lot of ring strain, but more strained molecules have been made that are actually stable at room temperature.

You might also note that like the above examples, cyclobutadiene is another example of a molecule that is cyclic, conjugated, has 4 pi-electrons, and is flat.

What’s even more interesting is what was learned about the geometry of cyclobutadiene. Rather than being a molecule with identical bond lengths (like benzene), cyclobutadiene was found to have a rectangular shape, indicating that the electrons were not delocalized. [Note 3]

What this tells us is that even when a molecule fulfills all the conditions (cyclic, conjugated, flat, 4 pi electrons), the symmetric geometry is particularly unstable. [Note 5]. Very interesting!

So far all the examples we’ve seen so far had 4 pi electrons. You might be wondering: are there any examples of anti-aromatic molecules that have more than 4 pi electrons? Why, yes.

The molecule below is called “Pentalene”. It has been synthesized, but is only stable below –100 °C. Above this temperature it combines with another molecule of itself  (reference). Another example of spectacular instability.

Pentalene has 8 pi electrons. This might set off some alarm bells of recognition. Remember how the number of pi-electrons in aromatic molecules followed the sequence (2, 6, 10, 14….) ?

This example suggests that the number of pi electrons in anti-aromatic molecules follows the sequence (4, 8, 12…)

6. What Makes A Molecule Anti-Aromatic?

So what do all of these molecules in this rogues’ gallery have in common?

This unusual instability is called “anti-aromaticity”.

This means that we can now draw up three categories for molecules according to the following criteria:

Wait a second – you might wonder why cyclooctatetraene is classified as “non-aromatic”. With 8 pi electrons (twice an even number) shouldn’t it be “anti-aromatic”?

Think of fulfilling the conditions for  “anti-aromaticity”  as a bit like qualifying for an extremely punishing income tax. Given the opportunity to find a loophole to get out of the tax, would you do it? Probably.

Cyclooctatetraene is anti-aromatic only if it is flat. However, the relatively “floppy” structure of cyclooctatetraene allows for some flexibility. The bonds can rotate away from flatness such that the molecule adopts a “tub-like” shape, thereby avoiding the “antiaromaticity tax” of 12 kcal/mol that would be paid if all the p-orbitals on the molecule were conjugated with each other.

It turns out that cyclooctatetraene has been synthesized, is stable (you can buy it here, for example) and behaves like a “normal” alkene, undergoing addition reactions, hydrogenation, and so on.

Pentalene (above) which also has 8 pi-electrons, has a very rigid bicyclic structure that prevents bond-rotation away from flatness. Hence, it’s stuck in its anti-aromatic conformation.

So far our treatment of aromaticity and anti-aromaticity has been purely descriptive and empirical.  We’ve shown lots of examples, and given lots of rules, but missing from the discussion has been any deep explanation of “why“.

What’s so special about the benzene ring that makes it so stable? Why is it stable?

What’s so special about the cyclobutadiene system that makes it so unstable. Why is it unstable?

In order to answer these deeper questions, we’re going to have to step back and examine the molecular orbitals of these two molecules, and then come to a deeper understanding of aromaticity and anti-aromaticity.

Thanks to Matthew Knowe for help in preparing this post.

Note 1.  For simplicity, the image shown in the main article fudges on the actual reaction conditions. The actual experimental conditions are shown below. The solvent is propionic acid, and the Lewis acid silver perchlorate is added to assist with pulling off the iodine. [The idea is that Ag+ coordinates to the iodine, and then the C-I bond breaks. Silver iodide is extremely insoluble, and precipitates out of solution, driving the reaction towards completion].

Even under these conditions the cyclopentadienyl carbocation is not formed, which is a testament to its extreme instability.

Note 2.  Epoxidation on ethene (aka ethylene) is done to the tune of 15 million tons, annually. Epoxidation of acetylene to form oxirene is unknown.

Fleeting evidence of the existence of oxirenes has been found.  There is good evidence from isotope labelling studies that oxirenes are fleeting intermediates in certain Wolff rearrangements. There are also two examples of oxirenes that have been trapped at extremely low temperature, but decomposed above 35 Kelvin. [For the curious, here’s a review]

The fleeting existence of a 1H-azirine has been postulated in the addition of a nitrene to an acetylene, which quickly rearranges to a (stable) 2H-azirene (below).

Note that in 2H-azirene the lone pair on the nitrogen is at right angles to the pi system, so this system is non-aromatic as opposed to anti-aromatic.

Cyclobutadiene reacts with itself at 35 K to form a “dimer”, in an example of a Diels-Alder reaction.

Note 4. Yes, it’s true that the lone pair in azirene can be put into an sp3 hybrid orbital (below). This likely reduces the anti aromatic “penalty” somewhat, but the molecule is still incredibly unstable. Anti-aromaticity is the simplest way to account for this.

Note 5. The rectangular geometry is due to an effect known as the Jahn-Teller effect. Remember the Pauli exclusion principle, where electrons can’t have the same quantum number? Well, as we’ll see when we look at the molecular orbital diagram of cyclobutadiene, “square” cyclobutadiene has two “degenerate” electrons, i.e. they have the same energies and quantum numbers. This leads to a phenomenon known as “Pauli repulsion”, where elongation of the bonds occur until the energy levels of the two electrons are differentiated. Definitely an advanced topic.