Home / Degrees of Unsaturation (or IHD, Index of Hydrogen Deficiency)

Degrees of Unsaturation (or IHD, Index of Hydrogen Deficiency)

Before we get going, see if you can apply the equation in the box above to find the degrees of unsaturation in these extremely well known molecules whose formulae are given below.

The latter three molecules are somewhat “naughty” examples, being illegal in most, if not all states. Hopefully that’s an incentive for you to actually do the calculation!  (answers at the bottom of the post).

2. Playing Around With Molecular Formulae: Degrees of Unsaturation

Let’s start this discussion by looking for patterns in molecular formulae. We’ll start with hydrocarbons containing no double bonds or rings.

More specifically, can you come up with a formula?

You should be able to see that for a hydrocarbon with no rings or double bonds, the number of hydrogens is equal to twice the number of carbons, plus 2.

4. Each Double Bond or Ring Reduces The Hydrogen Count By 2

Since every pi bond results in a loss of 2 hydrogens from the molecular formula, we refer to this to as a “degree of unsaturation“.

Let’s turn our attention to cyclic compounds. Do you notice a similar effect?

You should! Every ring in the molecule decreases the number of hydrogens by two.

5. Each Ring Or Double Bond Is Called A “Degree Of Unsaturation”

Therefore, each ring introduces a “degree of unsaturation” into the molecule.

You might ask: what if we have a molecule with rings and multiple bonds? See for yourself.

The effect is additive. That is, the “degrees of unsaturation” is the sum of the number of double bonds and rings.

Note that it doesn’t tell you how many double bonds are present or how many rings are present. It merely tells you their sum.

For instance, thus the molecular formula C6H6 (4 degrees of unsaturation) is satisfied by molecules with

[Historical side note: the formula of benzene was known to be C6H6 from Michael Faraday in 1825, but the correct structure was not proposed until 1865 (Kekule) and not confirmed until 1929, by Catherine Lonsdale’s X-ray studies . Just a reminder that knowing the molecular formula only gets you so far. ]

Helpful hint: if you see 4 degrees of unsaturation in an unknown molecule, thinking “benzene ring” is a good place to start.

7. What About Molecules Containing Oxygen?

So far, so good.  Let’s move on. What about molecules with oxygen?

Note that a π bond which contains oxygen still counts as a “degree of unsaturation” (see formaldehyde, CH2O).

OK. What about halogens like chlorine, fluorine, iodine and bromine?

For the purposes of our formula relating hydrogens to carbons for molecules without rings or double bonds, halogens can be counted as hydrogens. That is, carbon tetrachloride (CCl4) has the same degrees of unsaturation (zero) as CH4.

We can thus modify the equation for a molecule with no double bonds or rings as follows:

9. Nitrogen Is A Little Bit Tricky

We’ve saved nitrogen for last, because it’s a bit weird.  Try to see the pattern of how nitrogen affects our formula.

The way to make the equation work with nitrogen is to add the nitrogen count to the right hand side of the equation, like this:

Try it with cadaverine (C5H14N2) which contains no double bonds or rings.

10. A Unified Formula For Degrees of Unsaturation

So far our equation has only applied to “saturated” compounds with no double bonds or rings.

How can we use this to make a general formula for “degrees of unsaturation”, which is actually… useful?

Math time. If we move the left hand side over to the right, we get this:

Zero equals the degrees of unsaturation in this case.

If we introduce a double bond or ring, the equation will return “2”.

Each successive degree of unsaturation will increase this number by 2. For instance, 2-chloropyridine C5H4NCl gives us 8:

Now 8 is not the degrees of unsaturation. It’s merely the number of hydrogens “missing” from the corresponding non-cyclic alkane of the same carbon count.

In order to make this equation give us the actual degrees of unsaturation, we need to divide everything by two.

We can really condense things by using the symbols H, C, N, and X to represent hydrogens, carbons, nitrogens and halogens, respectively.

This is our final form for the equation for “degrees of unsaturation”, or “index of hydrogen deficiency” if you prefer.

OK, now for those real-life examples I mentioned above.

Let’s plug each of them into our formula. You should get:

Now, let’s look at each of the molecules. You’ll find that the calculated degrees of unsaturation agrees with the sum of [multiple bonds and rings] in the molecule.

With the structure in front of you it seems obvious. But if you’re dealing with an unknown it can be very helpful, like we saw with deer tarsal gland hormone in the last post.

In the next post, we’ll start delving into the mysteries of spectroscopy. We’ll start with one of the simplest spectroscopic techniques – UV-Vis spectroscopy – and show how it can be used to deliver clues about the structures of various molecules. 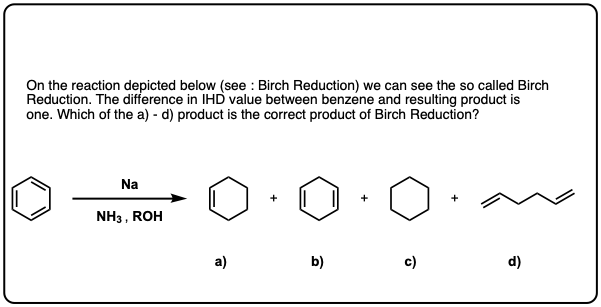 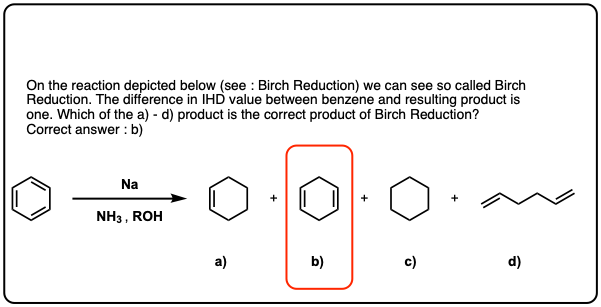 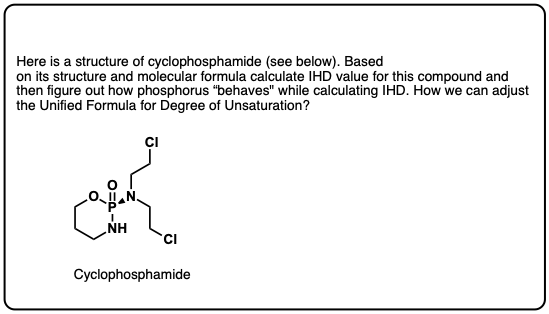 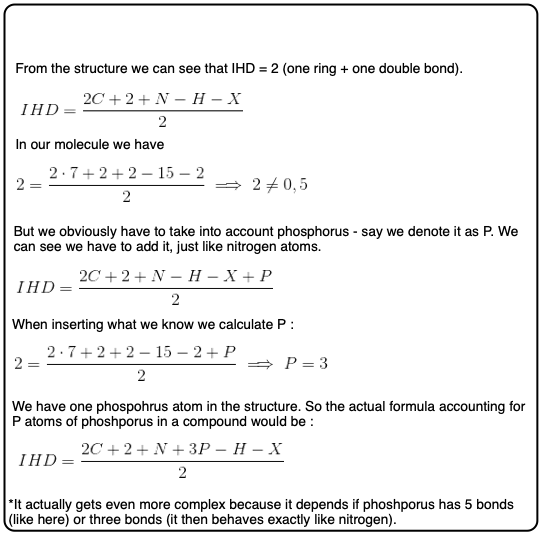 21 thoughts on “Degrees of Unsaturation (or IHD, Index of Hydrogen Deficiency)”