Synthesis, Nomenclature, and Properties Of The Amide Functional Group

“Amides” are what we call an amine that has a single attached carbonyl group. The amide functional group is to amines as esters are to alcohols.

Confusingly, the word “amide” is also used to refer to the conjugate base of amines,  such as sodium amide (NaNH2) and lithium di-isopropylamide (LDA). The latter are sometimes differentiated by referring to them as “amide bases”. Others will use slightly different pronunciation to differentiate the two (ayyy-myde and aaah-midd). As with any other homonym, the key is context.

As with amines, the nomenclature used for an amide depends on the number of carbons attached to the nitrogen.

When the amide nitrogen has substituents other than hydrogen, we specify them using the prefix N- to avoid confusion. For example, N-methylpropionamide specifies the attachment of a methyl groups on the nitrogen; without the N– prefix, one might assume that the methyl group was attached to carbon, which would be an entirely different molecule.

Attaching a carbonyl group to an amine has two drastic effects on the properties of the nitrogen.

A third, more subtle property of amides is that they usually have restricted rotation about the C–N bond.  The resonance form where there is a C-N bond makes such a significant contribution to the resonance hybrid that one can think of the C–N bond as having “partial double-bond character”. [In this post on Conjugation and Resonance, we saw that “bridgehead amides”, which lack the necessary orbital overlap for this resonance to occur, are orders of magnitude more unstable than “conventional” amides.]

Halides (e.g. Cl– ) and carboxylates (RCO2– ) are much weaker bases, and thus much better leaving groups than HO–. So by adding an amine to an acyl halide or acid anhydride, nucleophilic acyl substitution can occur under much milder conditions, resulting in our desired amide.

(One can obtain amides through the reaction of esters with amines, but given that alkoxides [RO–  ] are poorer leaving groups than halides or carboxylates, this method requires more forcing conditions. )

One thing to note with acid halides is that the process generates a single equivalent of HCl as a byproduct.  In the absence of any additional base, the maximum yield of the procedure would be 50%, since the HCl would protonate any amine and render it a non-nucleophilic ammonium salt.

One way to ensure the reaction proceeds to completion is to add a second equivalent of amine. There are other practical ways of resolving this issue, which I’ve consigned to Note 2  .

If you need a refresher on the mechanism of nucleophilic acyl substitution hover here for a pop-up image or open image link here:
[click here and an image of the mechanism will pop up].

One way to think of nitriles is that they are masked carboxylic acids. If treated with aqueous acid and a lot of heat – sledgehammer conditions –  they can be hydrolyzed to carboxylic acids.

One of the intermediates in this process is a primary amide.

So if we use a slightly kinder, gentler sledgehammer technique, sometimes it’s possible to salvage the amide out of our reaction mixture before it’s hydrolyzed to the carboxylic acid.

The image below shows how one could synthesize an amide from an alkyl halide precursor, via the good-ol’ SN2 reaction:

What’s meant by “mild” ? One set of conditions for the hydrolysis of phenylacetamide (PhCH2CN) to PhCH2CONH2 gives the reaction conditions as “HCl, H2O, 40-50°C, 1h “. [for a lovingly detailed experimental procedure, go here]

5. Synthesis Of Amides, Part 3: Use Of A Dehydrating Reagent (Such As DCC)

The synthesis of penicillin V in 1957 by John Sheehan’s group at MIT stands as one of the heroic achievements of postwar-era organic chemistry.  The key problem was construction of a cyclic amide (the β-lactam ring) which is extremely unstable under acidic conditions.  This was of no small importance, as the β-lactam is also key to penicillin’s mechanism of action: interfering with synthesis of the bacterial cell wall.    Attempts to make this cyclic amide by converting a carboxylic acid to an acyl halide with SOCl2, PCl3, PCl5, and a host of other methods all failed. [Note 3]

Under the reaction conditions, the carboxylate oxygen attaches to the electrophilic carbon of DCC, making what we call an “active ester” – in other words, an ester that actually has a decent leaving group (unlike most esters, which don’t). The active ester is then attacked by the amine in a classic nucleophilic acyl substitution, which leads to the formation of the amide.

Looking at the byproduct, note that there are two hydrogens (each attached to nitrogen) and an oxygen (attached to the central carbon).  That’s where the H2O has gone!

Because this post is likely long enough as it is,  hover here for a pop-up image or open image link here:

Since this reaction occurs under neutral conditions, it is extremely useful in the synthesis of peptides, which can undergo racemization (epimerization, actually) under both basic and acidic conditions.

6. Summary: Three Effective Methods For The Synthesis of Amides

Let’s end by summarizing these three important (but by no means exhaustive) ways to make amides:

This concludes our post on  the main points of amide nomenclature, properties, and synthesis. For a bonus method of amide synthesis, read on.

Since it’s usually covered in the textbooks, let’s conclude by considering a fourth possibility – the simplest one imaginable. What if we take a carboxylic acid and combine it with an amine, hoping that an amide will form. What happens?

Amines are bases, and carboxylic acids are, well, acids. Add the two together and you get an innocuous salt.

Sometimes one can make amides through heating the living daylights out of this  salt  in a sealed tube, driving off an equivalent of water. This  method is called pyrolysis.

The method is nothing if not direct, and has all the subtlety of a howitzer.

The problem with pyrolysis is that the HO– group of a carboxylic acid is a terrible leaving group.

In order to form an amide from this species, the carboxylate oxygen (O– ) must somehow depart. This is not an easy thing to do, as the conjugate base of O– is the double anion O2– . In any list of leaving groups, O2– would rank somewhere between, “shitty” and “f&cking awful”.

However, if one hits this salt with the chemical equivalent of the Hammer of Thor: brute-force, high heat, a series of proton transfers from the ammonium salt can occur.  eventually liberating H2O and forming the C-N bond.

In certain cases, especially simple amides, and also in the formation of simple lactams, the process can be satisfactory.

In many other cases, however, it results in the formation of a black tar at the bottom of your flask from which no useful product may be obtained.

As any organic chemist can tell you, there are many diverse ways to create intractable black tars at the bottom of your flask, and this is just one method. Think of how much you still have to discover! 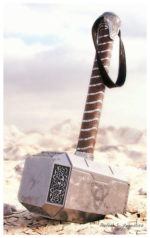 Note 2. A very common way of carrying out this reaction is to use what are called, Schotten-Baumann conditions, where one takes up the reactants in solvent like diethyl ether or dichoromethane, and adds an aqueous solution of NaOH, resulting in a biphasic mixture. Any ammonium salts that form can dissolve in the aqueous phase, whereupon they are neutralized by the excess base and return to the organic phase.  Amines are generally far more nucleophilic than hydroxide ions, so hydrolysis of the acid chloride to give a carboxylic acid is generally not a problem.

“At the time of my successful synthesis of penicillin V in 1957, I compared the problem of trying to synthesize penicillin by classical methods to that of attempting to repair the mainspring of a fine watch with a blacksmith’s anvil, hammer, and tongs” – John C. Sheehan

Note 4. The problem with using DCC is that the byproduct, DCU, is a tremendous pain in the ass to get rid of. Most byproducts are easily removed using column chromatography. Not DCU. Paying little heed to solvent polarity , DCU emerges from a column slowly, in drips and drabs, contaminating every fraction as it goes.  EDC  [1-Ethyl-3-(3-dimethylaminopropyl)carbodiimide] is a variant of DCC that has a tertiary amine unit; thus, a simple acid wash during workup will remove all the urea, saving a lot of time and headache. 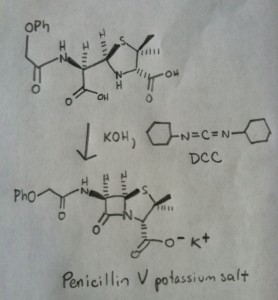 4 thoughts on “The Amide Functional Group: Properties, Synthesis, and Nomenclature”