How do you determine R and S configurations on Newman projections?

The key is to be able to quickly convert Newman projections into line diagrams, and then use the familiar CIP rules to determine R/S on the line diagrams.

So how do you convert Newman projections to line diagrams? That’s what we’re going to cover in this article.

In two recent posts we discussed how to use the Cahn-Ingold-Prelog (CIP) rules to assign (R/S) to configurations of chiral carbons in a variety of situations, both simple and more complex.

So far, all the questions have asked you to assign (R/S) on molecules drawn as bond-line diagrams, such as the molecule shown bottom left.

This is fine. But every once in awhile – like on an exam, for instance, hint hint – you might find yourself thrown for a loop. For example, how do you determine R/S when the molecule is drawn as a Newman? (bottom right)

The trick is to convert the Newman projection to the bond-line diagram and then assign R/S.

2. Most People Are Actually Pretty Good At Visualizing Familiar Things In 3-D. The Problem For People Starting Organic Chemistry Is That Molecules Are Not Familiar

One common thing I hear from students about why organic chemistry is hard is that they say they have “a hard time visualizing things in 3D”.

I actually don’t think this is true.

I think most people are fine visualizing things in 3D.

The problem is that visualizing molecules is unfamiliar.

Given this hypothesis, let’s take something that is familiar and do some visualization exercises.

Here’s a picture of a hungry Jerusalem street cat. 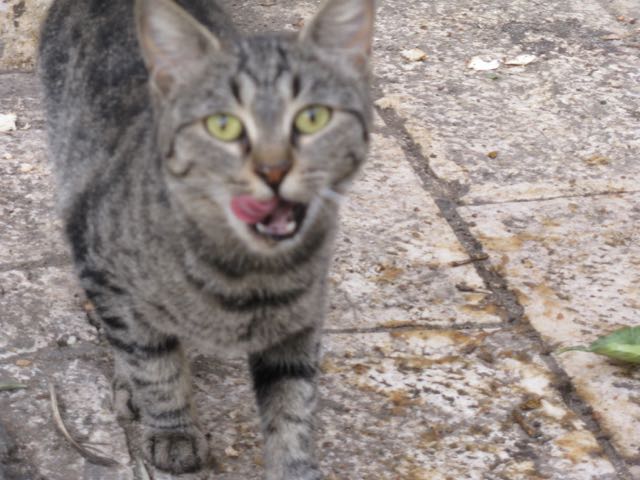 Could you visualize what it would look like from the side?

Almost certainly, because you are very familiar with how cats look from most angles.

If you had to make a drawing (stick figures are fine) it would probably look something like this:

Note we took some liberties. The legs facing us are drawn as wedges and the ones pointing away are dashes.

[Here, I drew the two wedges on the “inside” relative to the dashes, but drawing them on the outside (or even alternating) is OK, since it amounts to the same thing]

3. The “Newman Projection” Of A Cat

Now let’s do the same kind of exercise, but in reverse.

Let’s take that the stick figure we just drew and try to picture what it would look like from the front (i.e. look from the left) and from the back (look from the right).

For reasons that will soon become apparent, we’ll add a bit of detail: let’s give the cat some colored “socks” (orange and blue).

[You might ask: what’s that weird looking symbol?  It’s  just a symbol that says,  “imagine looking at this thing from this direction”]

Because you likely have a very good 3-D mental model of a cat, you shouldn’t have found exercise this too hard.

Hopefully you got something like this, below. For simplicity, I omitted drawing in the eyes [2 in the front view, 1 in the back view (heh)]

The circle represents the cat’s body, since the front and back hips block each other.

Maybe you noticed this helpful correspondence:

Of course this has all just been a roundabout way of reviewing the Newman projection, as well as an exercise in  trying to help you realize that you are better at visualizing molecules in 3-D than you previously may have thought.

It helps that cats map on to molecules pretty well!

Recall that Newman projections are a convenient way of showing conformations in molecules. For example, the cat we just drew was in the “eclipsed” conformation, where the head and tail both line up with each other like the hour and minute hands on a clock striking midnight. The front and back legs line up as well.

[Despite several attempts, I was unable to obtain a good photo of a Jerusalem street cat in a staggered conformation. They really don’t like being twisted. So we’ll have to work with models.]

5. Eclipsed And Staggered Conformations Are Interconverted By Rotation Of 60° Along The Central C-C Bond

When we look at this “staggered” molecule from the side, we obtain a bond-line diagram where the bonds in the plane of the page have a zig-zag configuration (bottom right).

If we look at this “staggered” bond-line diagram from the left, we obtain the “staggered” Newman, drawn top right.

6. How To Convert A Newman Projection  To A Line Diagram

So how do we convert a Newman diagram to a bond-line diagram? This section will walk through all the steps.

The first thing to recognize is that in bond-line diagrams there are only 4 possible patterns that the bonds in the plane of the page will follow.

If we look from the left on each of those 4 line diagram patterns, we can see that each one generates a different Newman projection pattern.

There are 4 Newman projection patterns:

Now that we’ve seen how the patterns work in the forward direction, let’s now apply these patterns in the reverse direction.

7. A Cheat Sheet For Going From A Newman To A Line Diagram: There Are Only 4 Templates To Consider

Using these templates, we can take any Newman projection and work backwards to get the corresponding bond-line template, and then draw in the dashes and wedges.

Here are the 4 Newman projection patterns, converted into line diagrams. (On the right, you’ll see what it looks like when tilted 30°).

One important thing to note. As we saw with the cat, when we look from the left side of the molecule:

If you follow through with the pattern of looking at the molecule from the left perspective, then all you need to remember is to draw the wedges on the right side of the Newman diagram.

Let’s apply this to a few specific examples.

First, let’s assign R/S to a Newman drawn in a staggered conformation with a single stereocenter.

This one is drawn as (front up, back down) so we will use Template #2 from above.

In this example we drew the (front up, back down) staggered template, and then filled in the bonds. Note that the groups on the right of the Newman (Br and CH3) became attached to wedges in the line diagram.

You should obtain (R) as the configuration.

Next, let’s go back and do our original example (2-bromo-3,4-dimethyl pentane).

It is also drawn in the staggered conformation (front down, back up). So here we will use Template #1.

To see the full details hover here or click on this link.

10. Determining R and S On A Newman With An Eclipsed Conformation: Example #3.

What if the molecule is in an eclipsed conformation? Try this one.

This follows the (front down, back down) pattern, so follow Template #4

You should obtain (3R, 4R). To see details of how it was done, hover here or click on this link.

Knowing that there are only a few templates makes it easier.

Once you do it enough times, you won’t even need the templates, and you might find that it’s easier to just do it in your head.

In the next post, we’ll look at the Fischer projection.