All about how to draw the product of a cyclohexane chair flip – and also, three ways not to!

In a recent post, an aerial tour of the cyclohexane chair, we showed that there are two different positions a substituent can occupy on a cyclohexane chair – axial (straight up and down, relative to the ring) and equatorial (off to the side of the ring).

This brings up an interesting thought experiment. Let’s take a really simple substituted version of cyclohexane – 1-methylcyclohexane, for example.
From the “dash wedge” diagram, there is only one way to depict 1-methylcyclohexane. Like this. No matter how you rotate it, or flip it – it’s all superimposable versions of the same thing.

Now let’s draw the cyclohexane chair version. We draw a chair, and then…. hold on!

Can you see how this is a different situation?  We could put the methyl group on an axial carbon or an equatorial carbon… and these are not superimposable on each other, unlike the “flat” drawing above.

2. How Do These Conformations Interconvert? Through A Cyclohexane “Chair Flip”

Same connectivity, different shape – this is a definition of “conformational isomers” if ever there was one.

However, unlike, say, conformations in linear alkanes, which involve rotations about single bonds, it might not be immediately obvious how the chair on the left can be converted to the chair on the right.

The point of this post is to describe how these two conformations  can be converted into each other, through a series of bond rotations we call a “chair flip”. 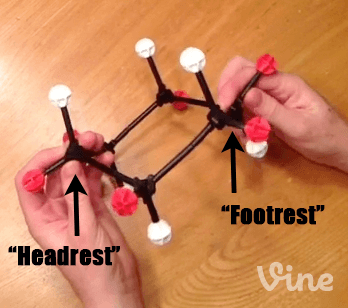 Step 1: Bring Up A “Footrest” of The Chair To Make A”Boat”

Now, if we take the “foot rest” of cyclohexane, and rotate several of the bonds, we are able to obtain a structure which looks like it has two “head rests”. This is called the “boat”  [To be technical, it will actually be a “twist boat”, where there is a slight offset of the groups on the “prow”]. I am still partial to “hammock”. IUPAC, are you listening? 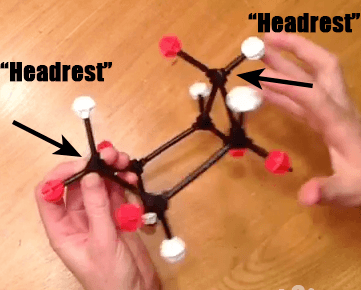 Step 2: Pull Down The Opposite Head Rest To Make A New Foot Rest

Now, if we take the “original” head rest (on the left) and pull it down, so that it makes a new “foot rest”, we have the following. 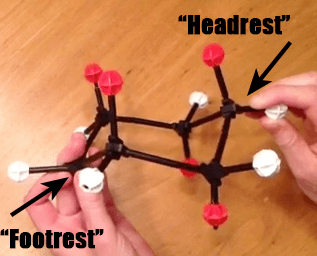 Your first thought might be – that’s pretty useless! Who cares if we just start with a cyclohexane chair and convert it into another cyclohexane chair. That’s like converting a dollar bill into four quarters and then exchanging them back into a dollar bill. It’s almost like nothing happened.

5. The Chair Flip Converts All Axial Groups To Equatorial Ones, And Vice Versa

Here’s the molecular ballet in motion. Pay close attention to the [white] axial groups and the [red] equatorial groups. What do you see?

This brings us back to 1-methylcyclohexane.

6. The Chair Flip Of 1-Methylcyclohexane, Revisited

These two conformations can be converted to each other using a chair flip. Note how on C-1,  “axial up” becomes “equatorial up”. That’s the right way to do it.

7. Three Ways NOT To Properly Do A Cyclohexane Chair Flip

This being organic chemistry, there’s plenty of ways to screw this up. Here’s a few wrong ways to draw a chair flip :

In the next post, we’ll look into this “ring flipping” process in a bit more detail. Stay tuned!

This is a topic commonly taught to undergraduates in Organic Chemistry. Cyclohexane’s ground state conformation is the chair, and it can undergo a ring ‘flip’, where axial substituents become equatorial substituents. This flip goes through some higher-energy intermediates (the boat, half-boat, and twist-chair).

7 thoughts on “The Cyclohexane Chair Flip”