This is the third in a series of three posts on the key electrophilic aromatic substitution (EAS) reactions in introductory organic chemistry.

Taken together, so far we have learned reactions to form carbon-halogen, carbon-nitrogen, and carbon-sulfur bonds.

What important class of bond is missing so far?

When an alkyl halide is treated with a Lewis acid in the presence of an aromatic ring,  the alkyl group can be added to the ring (forming C-C) with the loss of a C-H bond. This electrophilic aromatic substitution reaction is known as the Friedel-Crafts alkylation reaction.

Generally, no reaction occurs in the absence of Lewis acid. A common choice for the Lewis acid is aluminum chloride, AlCl3 , but many others may be used, such as FeCl3 among others.

Alkyl halides (typically chlorides, bromides, and iodides) must be used, as the reaction fails completely for alkenyl and alkynyl halides.

3. The Role of The Lewis Acid In Friedel-Crafts Alkylation Is To Activate The Alkyl Halide

If no reaction occurs in the absence of a Lewis acid, then what is the role of the Lewis acid here?

4. The Key C-C Bond Forming Step  Is Attack Of The Aromatic Ring Upon  The Carbocation (or carbocation-like) Electrophile

Once the electrophile has been activated, the next step of the Friedel-Crafts is attack of the activated electrophile by the aromatic ring. This is also the rate-determining step, as it disrupts the aromaticity of the ring (and its ~36 kcal/mol of resonance energy).

In this step a C–C (pi) bond from the aromatic ring breaks, and a new C–C sigma bond is formed, leading to a carbocation intermediate:

The last step is deprotonation of  C–H by a weak base (e.g. Cl – ) to restore aromaticity at the ring:

[another way to depict the curved arrows in this reaction is to dissociate Cl– from AlCl4– and then employ it as the base. Either way it works out to the same thing].

Note that AlCl3 is regenerated here, allowing it to be used again in step 1 with another equivalent of the alkyl halide. Hence, AlCl3 can act as a catalyst in this reaction, since it increases the rate of reaction but is not consumed by it.

5. Look Out! Carbocation Rearrangements Can Occur In The Friedel-Crafts Alkylation Reaction

Needless to say, organic chemistry is not like this. You’ve probably already experienced a situation where concepts you learned in Org 1 reverberate back to Org 2 chapters in unexpected ways. Well, get ready for another fun example.

We showed above how ethyl chloride reacts with benzene and AlCl3 in the Friedel-Crafts alkylation to provide ethylbenzene.

Extension of this reaction from ethyl chloride to propyl chloride should correspondingly give propylbenzene.

How did this happen?

In the Friedel-Crafts, we’ve seen that coordination of a Lewis acid to an alkyl halide resulted in a carbocation (or in the case of primary alkyl halides, at least a “carbocation-like” species) that is then attacked by the aromatic ring in the rate-determining step.

6. If A Hydride Shift Or Alkyl Shift Will Result In A More Stable Carbocation, It Will Happen

So what is happening here is really no different: if a carbocation can rearrange to a more stable carbocation through a hydride or alkyl shift, it will do so.

Organic chemistry 2: the course where first-semester concepts come back to bite you in the ass.™

Here’s what happens in the case of propyl chloride.

A shift of hydride from C2 to C1 results in a secondary carbocation, which is then attacked by the aromatic ring.

Another example of a rearrangement in the FC alkylation included in the footnotes just for fun. [Note]

7. Limitations of the Freidel-Crafts Alkylation

Final note on the Friedel-Crafts alkylation: a few drawbacks.

A process related to the Friedel-Crafts alkylation, called Friedel-Crafts acylation, was discovered by Friedel and Crafts around the same time (1877). If a Lewis acid is added to an acyl halide in the presence of an aromatic ring, an electrophilic aromatic substitution reaction can occur whereby the acyl group adds to the aromatic ring (with loss of HX).

As with the F.C. alkylation, the specific Lewis acid in the Friedel-Crafts acylation can vary. Aluminum chloride (AlCl3) is often used, but FeCl3 and other Lewis acids will also do the job.

Here’s a general example of the Friedel-Crafts acylation:

A specific example is the reaction between acetyl chloride and benzene catalyzed by aluminum chloride:

9. The Mechanism Of The Friedel-Crafts Acylation Reaction

So how does the Friedel-Crafts acylation reaction work?

As with FC alkylation, the first step is activation of the electrophile. Lewis acid coordinates to the halogen, and departure of the halogen (as AlCl4–) results in a fairly stable, resonance-stabilized carbocation know as the “acylium ion”.

As with the Friedel-Crafts alkylation, the final step is deprotonation at carbon to regenerate the aromatic ring.

10. No Rearrangements Occur In The Friedel-Crafts Acylation

For instance, let’s look at how we could use this to produce propylbenzene, which we saw could not be made from the Friedel-Crafts alkylation reaction of benzene with AlCl3 and 1-propylchloride.

The first step here is to perform a Friedel-Crafts acylation reaction between benzene and propionylchloride, perhaps catalyzed by AlCl3. This gives us ethyl phenyl ketone.

The next step is to perform a reduction of the ketone to an alkane, which (as we’ll soon see) can be performed in various ways. This gives us 1-propylbenzene.

[Commenter Victor, from the Chemistry Help Center, helpfully notes that there is a fourth way of doing it – converting the ketone to a thioketal, and then reducing it down to the alkane with Raney nickel. ]

We will talk more about synthetic pathways for aromatic molecules in a future post.

11. Limitations of The Friedel-Crafts Acylation

Before we finish our treatment of electrophilic aromatic substitution, it’s worth going into detail on one more facet of the Friedel-Crafts that often gives students headaches; the intramolecular versions.

Note. Bonus points if you said “carbon-oxygen”  as a type of bond we haven’t seen formed in EAS.  Direct electrophilic oxygenation of benzene rings is tricky to do in the lab. For our purposes, forming C-O on an aromatic ring is usually done indirectly, by means other than a direct EAS. Two ways we’ll explore in due course are the Baeyer-Villiger oxidation and certain reactions of diazonium salts.

Footnote. Last post we learned that sulfonyl groups can be removed with strong acid, and I alluded to another group that can be removed that would be covered in the next post (i.e. this post).  That group is t-butyl, which can be removed under forcing conditions, with strong acid. This works because the t-butyl carbocation is relatively stable and the reverse of the Friedel-Crafts alkylation is therefore feasible. 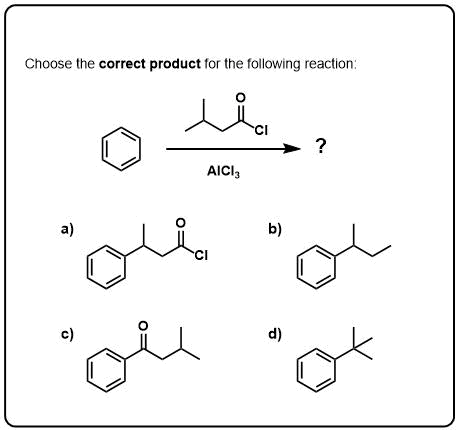 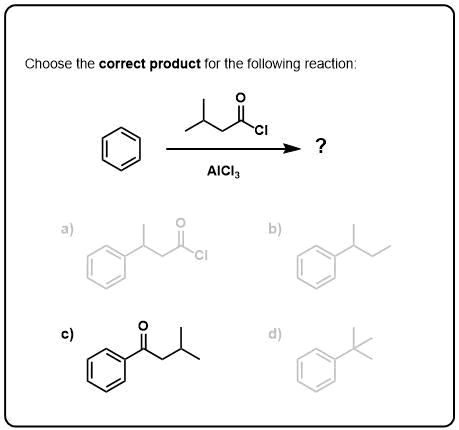 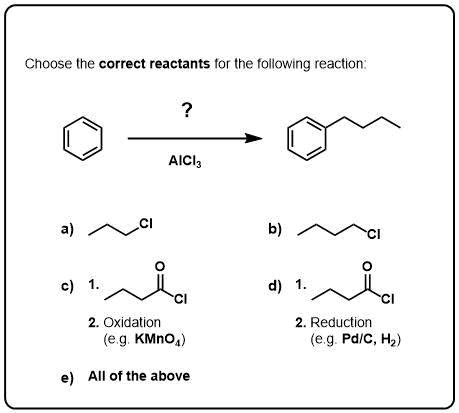 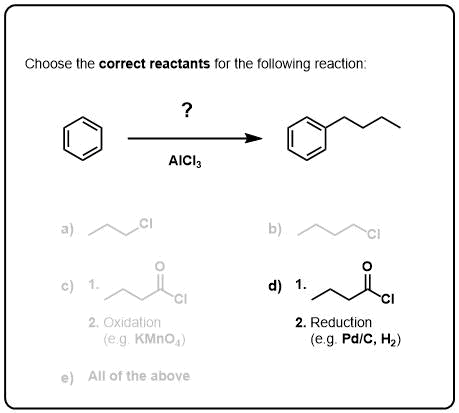 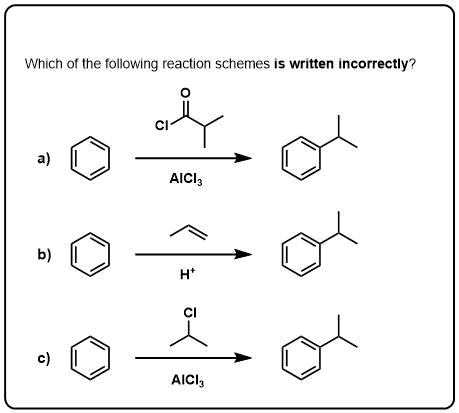 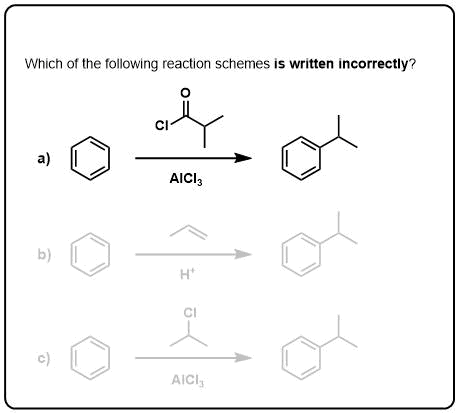 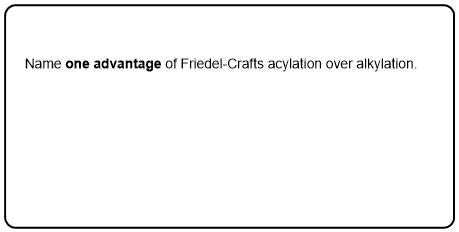 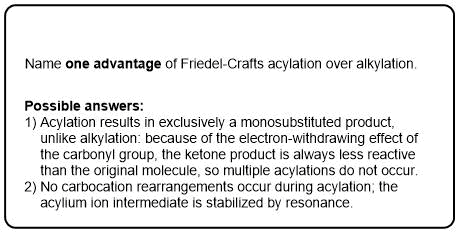 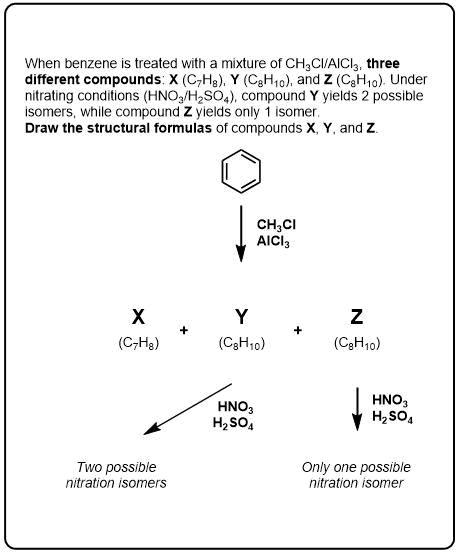 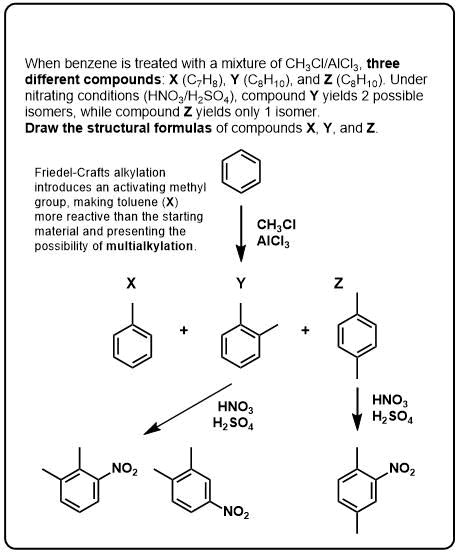