Home / Alkynes Are A Blank Canvas

Alkynes Are A Blank Canvas

Alkynes: The Gateway To Organic Synthesis

Now that we’ve gone through all the major reactions of alkynes, we can take a step back and look at the big picture. There are lots of reactions of alkynes. So what? you might ask. In this post I will try to convince you that alkynes are really useful building blocks for synthesizing a large variety of compounds.   As I like to say, alkynes are a “blank canvas” – you can turn them into pretty much any functional group you like, once you know which reactions to use. 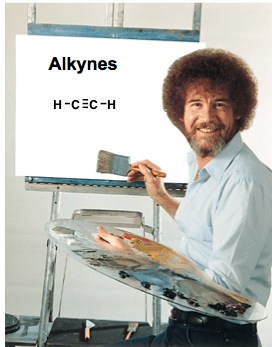 Let’s have a look.

1. Acetylene As A Building Block For Longer Alkynes (Terminal And Internal) In Synthesis

Acetylene is the ultimate carbon building block (on paper, anyway!). It bears two relatively acidic C-H bonds (pKa 25) and can therefore be “alkylated” (i.e. deprotonated to give its conjugate base, then treated with an alkyl halide) on either end giving either a mono-substituted (also known as a “terminal” alkyne) or di-substituted (“internal”) alkyne as desired. This is important because in first semester organic chemistry, this reaction represents an important means of extending the carbon chain. You don’t learn that many reactions that form C-C. This reaction comes up a lot!
Here’s the reaction with acetylene itself:

And here’s the extension of a terminal alkyne to give an internal alkyne:

Note that, provided that primary alkyl halides are used (secondary alkyl halides tend to give elimination) we can use this method to synthesize a large variety of terminal and internal alkynes. Keep that in mind for the next section.

2. Synthesis of Alkanes from Alkynes Via Hydrogenation

Alkynes can be used to synthesize alkanes. The method is simple: treat with a finely divided noble metal catalyst (palladium on carbon “Pd/C” is the usual choice, although finely divided platinum can also be used) along with hydrogen gas, and two addition reactions occur to give the alkane.

Following this so far? In two or three steps, given acetylene and a primary alkyl halide, we can synthesize a large variety of alkanes. This diagram shows the synthesis of heptane, but it could be used for propane, butane, pentane, hexane…. dodecane, and many more alkanes.

3. Synthesis of Alkenes from Alkynes Via Partial Hydrogenation

Since Pd-C and H2 tend to be a little overly frisky when reacting with alkynes (going straight to the alkane) we’ve also learned how we can control the addition of hydrogen to alkynes so that only one equivalent of H2 is added. This is done by using “Lindlar’s catalyst” (which gives “cis” alkenes) or with sodium in ammonia [Na/NH3]  (which gives “trans” alkenes).

See what we’ve done here? We can start with acetylene, and in just a few short steps, obtain a large variety of mono-substituted, cis-alkenes, and trans-alkenes. Want to make cis-4-octene or trans-2-heptene? No problem – they’re just 3 steps away from acetylene, as are a huge variety of other compounds.
Why is this important? Not only because we can synthesize alkenes (although that is itself important) – it’s because there are so many reactions of alkenes that can be used to convert the molecules into yet more different functional groups!

4. From Alkynes To Alkenes, And Then; Synthesis of Epoxides, Diols, Alcohols, Alkyl Halides…

In a previous series we covered the main reactions of alkenes. In the diagram below I’ve included just a few of their many reactions:

5. In Which Stereochemistry Rears Its Ugly Head (Especially On Exams)

One last detail to mention, although we’ll cover it in more detail later. When dealing with alkenes, and reactions of alkenes, stereochemistry is important – and often tested! This is often seen in the context of alkene isomers that undergo stereospecific reactions (such as halogenation and dihydroxylation). Take a look at these reactions:

Notice how the bromination of cis-butene and trans-butene gives two different products – the “chiral” products (R,R) and (S,S) and the “meso” product (R,S).  Likewise, so does the dihydroxylation of cis– and trans– 2-butene. We’ll come back to this when we do synthesis (soon!) but for now, the takeaway lesson is twofold: 1) the stereochemistry of alkene addition reactions is extremely testable, and 2) all of these products are readily synthesized in just a few steps from acetylene. This is an extremely common topic for exam questions.

6. So What About The Alkyl Halides? How Are They Made From Alkanes?

If you noticed above, we kind of brought in “alkyl halides” to our reactions without ever talking about how they were made. Furthermore, you might have noticed that so far none of the sections have covered the reactions of alkanes. We’re going to circle back for a little bit and address this blind spot. In the next series we’ll go through free radical chemistry and learn more about how a normally unreactive class of compounds (alkanes) can be coaxed into performing chemical reactions.

1 thought on “Alkynes Are A Blank Canvas”