Home / Introduction to Assigning (R) and (S): The Cahn-Ingold-Prelog Rules

Introduction to Assigning (R) and (S): The Cahn-Ingold-Prelog Rules

This post was co-authored by Matt Pierce of Organic Chemistry Solutions.  Ask Matt about scheduling an online tutoring session here.

1. Chiral Centers And The Problem Of Naming

Previously on MOC we’ve described enantiomers: molecules that are non-superimposable mirror images of each other. Perhaps the most memorable example is these “enantiocats”. 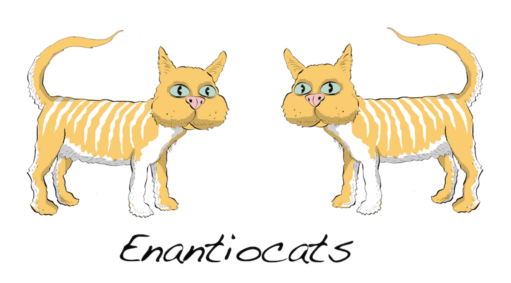 Each of these cats is said to be “chiral”: they lack a plane of symmetry.

What causes molecules to have chirality?

The most common source of chirality is a “chiral centre”: typically a tetrahedral  carbon attached to four different “groups”, or “substituents”.  For each chiral centre there are two (and only two!) different ways of arranging the 4 different substituents, which gives rise to two different configurations. [If you don’t believe there are only two, check out this post].

The purpose of this post is to introduce and describe the nomenclature we use to describe these configurations: the (R)/(S) notation, or Cahn-Ingold Prelog Rules.

Let’s look at a simple example.

However this nomenclature suffers from a serious problem. There is no simple correlation between the arrangement of substituents around a chiral centre and the direction in which polarized light is rotated. Another solution is needed.

A solution to this quandary was proposed by Robert Cahn, Chris Ingold, and Vladimir Prelog in 1966. The resulting “CIP” protocol works as follows:

We should reiterate that the designations (R) and (S) bear no relationship to whether a molecule rotates plane-polarized light clockwise (+) or counterclockwise (-). For example the most common naturally occurring configuration of the amino acid alanine is (S), but its optical rotation (in aqueous acid solution) is (+).

That seems simple enough! “Is that it?”, you might ask.

Uh, no. As it happens, there’s a few bumps in the road toward determining (R)/(S) once we get beyond the simple example above.

We’re not going to be able to fully address all of these issues in this post. But we can certainly deal with #1 and make some headway with #2. We’ll deal with #3 in a future post.

Let’s first consider the molecule below. The name of this molecule is (R)-1-fluoroethanol. It is listed below with priorities assigned based on atomic number. In this case F>O>C>H. So F is #1 and H is #4. The tricky part here is that the #4 priority is pointing out of the page (on a “wedge”).

Many instructors will tell you to “simply” rotate the molecule in your head so that the #4 priority is on a dash. Then you can assign R or S in the traditional way. This “simple” advice is not always an easy task for beginners.

Thankfully, it is technically unnecessary to perform such a mental rotation.

Here’s  a way around this. When the #4 priority is on a wedge you can just reverse the rules. So now we have two sets of rules:

If the #4 priority is on a wedge, reverse the typical rules:

R and S can easily be assigned to either picture of the molecule. I still encourage you to use a model kit and learn how to do so, however. Organic chemistry is much easier to understand, and much more beautiful, if you can master how to visualize a tetrahedral carbon atom.

5. Determining R/S When The #4 Group Is In The Plane Of The Page?

What if the #4 priority is in the plane of the paper, for example on a line? In this case it’s impossible to assign R and S in the traditional way. You’d have a 50:50 shot of getting it correct: not good odds. Again, if you can redraw the molecule in your head, then it’s better to just do that. If you can’t do this reliably then you need to learn the “single swap” concept.

Here’s how it works. Swapping any two groups on a chiral centre will flip the configuration of the chiral centre from R to S (and vice versa). [We previously talked about the “single swap rule” here]

Knowing this, we can do a nifty trick.

Here’s an example. Note that here  I first switched #4 and #3, but the main point is to switch two groups so that #4 is out of the plane of the paper.

This method always works, assuming you’ve determined the four priorities accurately. (It also works for cases when #4 is on a wedge).

However, sometimes we’re not in the position of dealing with 4 different atoms attached to a chiral carbon. For instance, it’s possible to have chiral carbons which are attached to 4 carbons. So how do we break the ties in these cases?

The quick answer is to use the “dot technique”. Here’s how it works. Let’s do it for 4-ethyl-4-methyloctane, above.

2. If there is a tie, list the atoms attached to each of those dotted atoms in decreasing order of atomic number.

4. If there is still a tie, move the dots to the highest ranking atom in the list (i.e. the atom with highest atomic number). The dots are helpful because they help you to keep track of where you are, which can be important in complex examples.

5. In this case, we keep moving along the chain. By the way, if you ever reach the end of the chain without determining a difference, that means that the groups are identical and it isn’t a chiral centre after all.

6. By this point we have enough information to assign (R)/(S). Since priority #4 is in the front, we can also break out our “opposite rule” for good measure:

7. Conclusion: The Cahn-Ingold-Prelog Rules For Assigning R and S Configurations

In the next post we’ll go into some trickier examples with determining R/S, including how to deal with double bonds, rings, and isotopes. In a future post, we’ll get into determining R/S in the Fischer and Newman projections.

Thanks to Matt Pierce for making major contributions to this article.

15 thoughts on “Introduction to Assigning (R) and (S): The Cahn-Ingold-Prelog Rules”