I got a very excited call from Walter yesterday. He was looking out the window of his apartment in Talbieh and spied a freaky looking cat with each of his two heads buried in a separate dumpster, happily chewing on some chicken scraps. Furthermore, he told me that it looked like Moe, but he looked reversed in some way. Could this be his elusive enantiocat?

He even got a picture: 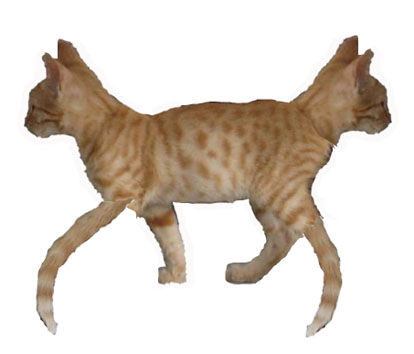 So I ran over to Walter’s immediately. This was exciting, because I’d been looking for enantio-Moe for a long time. We took the picture and mapped out the Fischer projections. 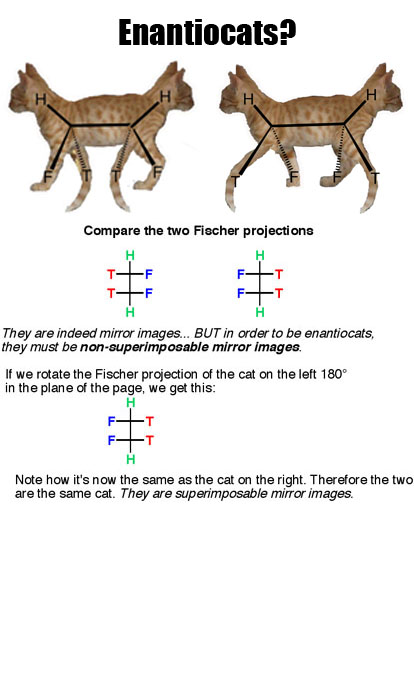 “Yep. But in order to be enantiocats, they have to be non-superimposable.”

“What does that mean?”

“It means that if you can rotate one of them in some way and line them up perfectly, they’re actually the same – not enantiocats.”

“Oh I see”, said Walter.  “So if I take the cat on the left and rotate him in the plane of the page… hm. He lines up exactly.”

“So you’re telling me that I got a picture of Moe?”

“From a different side, and his tails looking slightly different, but yes.”

“Ah. But how is this possible? Moe has chiral centers. He should be chiral!” 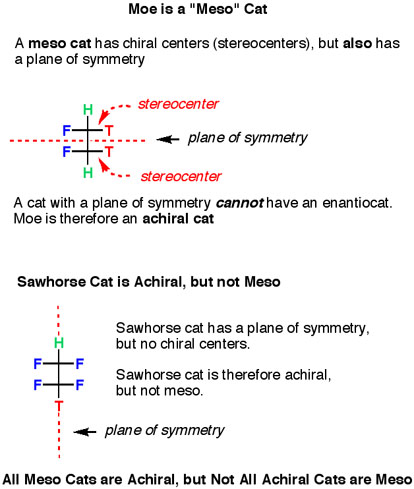 “Do you notice anything that Moe has in common with sawhorse cat?”, I asked.

“They both have a plane of symmetry.”

“And Sawhorse Cat is achiral, right?”

Walter thought about this for awhile. “So let me make an analogy. My hands are mirror images, yes?”

“But they are attached to my arms and my torso, symmetrically. So when I look at myself as a whole, I have a plane of symmetry, and am indistinguishable from my mirror image, even though parts of me (my hands) are chiral. So this cat is a little like me.”

“This is very strange. To have stereocenters and not be chiral…”

“Walter… the cat has TWO HEADS. Of course it’s strange.”