SOCl2 Mechanism For Alcohols To Alkyl Halides: SN2 versus SNi

Most of the time, the reaction of alcohols with thionyl chloride is taught as an SN2 reaction. And indeed, on primary alcohols this is definitely the case. The problem arises with secondary alcohols, where the reaction can be taught either as a classical SN2 with inversion, or… as a reaction with retention!? via the SNi mechanism. That latter part is what this post is about.

1. Conversion Of Alcohols To Chlorides With SOCl2 Proceeds With Inversion…Right? Well, Maybe Not Always

Some time ago I published this post on Reagent Friday discussing the mechanism of SOCl2 converting secondary alcohols to alkyl chlorides with secondary  through an SN2 pathway: 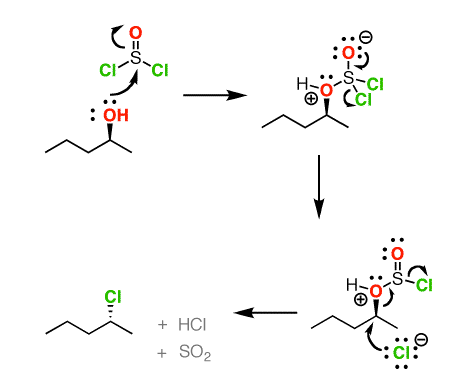 About six months ago this post arrived in the comments:

Slapdown! First of all, Rico is correct that the mechanism showing inversion with SOCl2 is not what happens experimentally. When a secondary alcohol is treated with SOCl2 (and nothing else) the usual pathway is retention.

The record should be set straight about this, so this post will cover:

2. What Really Happens In The Reaction of SOCl2 With Secondary Alcohols: The SNi Mechanism

In the late 19th century, Paul Walden performed a series of fundamental experiments on the stereochemistry of various reactions of sugars (and sugar derivatives). Walden noted that when (+)-malic acid  treated with PCl5, the product was (–) chlorosuccinic acid – a process that proceeded with inversion of stereochemistry. When (+) malic acid was treated with thionyl chloride (SOCl2), however the product was (+)-chlorosuccinic acid. This proceeds with retention of stereochemistry.

How can we understand this?
The reaction of malic acid with PCl5 leading to inversion of stereochemistry is an example of what we now call the SN2 reaction, and Walden was the first to make the observation that the stereochemistry is inverted. In fact the process of stereochemical inversion observed during the SN2 reaction is sometimes called Walden inversion in his honor. By the time most students encounter SOCl2 in their courses, the SN2 is a familiar reaction.

What is much more curious is the  observation that malic acid treated with SOCl2 leads to substitution with retention.  Sharp readers may recall that “retention” of stereochemistry can be obtained if two successive SN2 reactions occur [double inversion = retention]. Perhaps that is what is going on here? Maybe the carboxylic acid of malice acid can act as a nucleophile in a first (intramolecular) SN2, and then Cl- coming in for the second?

Good idea – but this retention of configuration occurs even in cases where no group can possibly perform an intramolecular SN2. There must be something else going on. And after a lot of experimental work, this is the best proposal we have:

This is called, SNi (nucleophilic substitution with internal return): what happens here is that SOCl2 corrdinates to the alcohol, with loss of HCl and formation of a good leaving group (“chlorosulfite”). The chlorosulfite leaving group can spontaneously depart, forming a carbocation, and when it does so,  an “intimate ion pair” is formed, where the carbocation and negatively charged leaving group are held tightly together in space. From here, the chlorine can act as a nucleophile – attacking the carbocation on the same face from which it was expelled – and after expulsion of SO2, we have formation of an alkyl chloride with retention of configuration.

So the chlorosulfite leaving group (SO2Cl) is quite special in that it can deliver a nucleophile (chlorine) to the same face it departs from, with simultaneous loss of SO2.

If it ended there, life might be simpler. But less interesting! [That is the sound of a can of worms being opened].

4.Why Adding SOCl2 AND Pyridine Leads To Inversion via The SN2 Mechanism

Here’s the twist.  As it turns out, the stereochemistry of this reaction can change to inversion if we add a mild base – such as pyridine.

Retention of stereochemistry with SOCl2 alone, inversion with SOCl2 and pyridine. What’s happening here? How does pyridine affect the course of this reaction?


In other words, by displacing chloride ion, pyridine shuts down the SNi mechanism.

5. Adding Pyridine To SOCl2 Shuts Down The SNi Mechanism

Even though the SNi can’t occur here, we still have a very good leaving group, and a decent nucleophile – chloride ion – and so chloride attacks the carbon from the backside, leading to inversion of configuration and formation of a C-Cl bond. This, of course, the SN2 reaction.

6. Summary: SOCl2 And Alcohols, With Or Without Pyridine – SN2 Versus SNi

You might be asking, “how common is this SNi mechanism? Is it something which occurs in a large number of other reactions we commonly encounter in introductory organic chemistry?”

To be frank, not really. There are some cases where species called chloroformates can also undergo the SNi with loss of CO2 but this isn’t seen very often at all in your typical first year course.

This might not interest everybody so I’m putting it in a note.

How Do Most Textbooks And Schools Across North America Deal With This Mechanistic Dichotomy?

Conversion of alcohols to alkyl halides is a useful transformation because alcohols are poor leaving groups by themselves, whereas alkyl chlorides will readily participate in substitution and elimination reactions. In many introductory organic chemistry courses, SOCl2 has traditionally been used as an example of a reagent that will convert alcohols to alkyl chlorides.

When I consulted my textbook collection for how the mechanism is covered, here’s what I found:

Only one textbook (in this admittedly incomplete sample) mentions the SNi mechanism at all. In four textbooks where SOCl2 is mentioned, the reaction is shown as proceeding through an SN2 mechanism. There’s no warning sign saying, “wait! the SN2 doesn’t happen for secondary alcohols”. If it’s not in the textbook, chances are it won’t be in the course.  So it’s not surprising that the most common interpretation of this is that inversion will occur for secondary alcohols:
This leads to situations like the following. Here is a part of an exam key from a very non-obscure R1 university:

This is a question that tests stereochemistry, and students are expected to write that the SOCl2 proceeds with inversion at a secondary carbon, proceeding through an SN2 mechanism.

There are exceptions. Another school *of similar reputation) tests this reaction as an SNi. 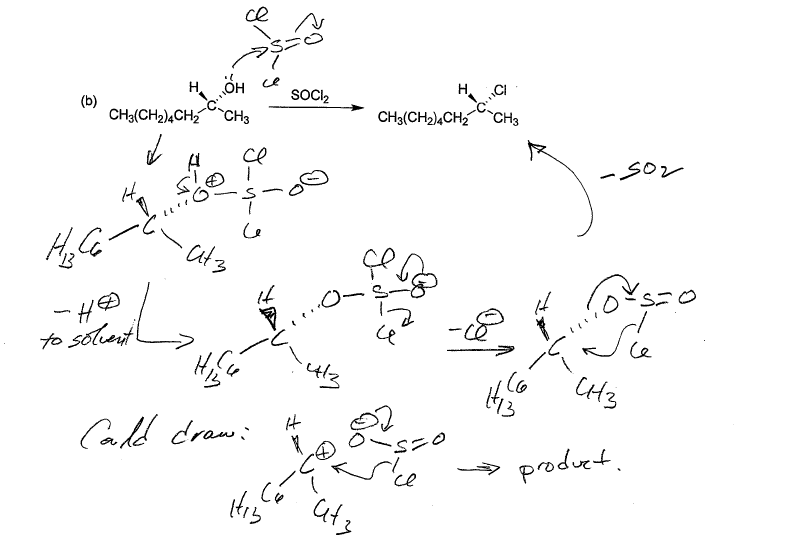 In summary, across North America at least, the discussion of the stereochemistry of SOCl2 reactions with secondary alcohols is a huge mess. I don’t have any data to back this up, but in all my hours of tutoring I have encountered the SNi reaction of SOCl2 being taught… once.

So What’s An Instructor To Do?

First of all, a mea culpa. I drew the SOCl2 as proceeding through inversion and an SN2 process because I’ve aimed the Reagent Guide at the broadest sub-section of students, and it’s most often taught as giving inversion. I should have been more clear that it was more complicated and there was so much confusion on the topic – so I’m grateful to commenters like Rico and others who have brought this to my attention.

Organic chemistry is so wonderfully rich and deep. With the luxury of having already learned all this stuff, I can look back and find it fascinating that just by switching from a primary to a secondary carbon, or from switching to a SO2Cl leaving group, one can change the mechanism from SN2 to SNi. The leaving group can provide its own nucleophile! How cool!

If I was in an introductory class with a full course load and a lot of other lab courses however, my attitude might be different: more like, “Jeezus, YHGTBFKM, is this ever obscure.”

I’ve asked other instructors what they do when they encounter this topic. Here’s what one has to say:

At the second yr / intro level, we keep it very simple. We only talk about it being an SN2 and going with inversion and thus complementary to the HX reactions. We ignore solvent effects for the thionyl chloride reactions.

It’s an instructors’ prerogative to pick their battles. I can completely understand how time and attention are limiting factors, and instructors inevitably have to make compromises about what gets included, what gets skipped, and how much detail they choose to include.  The fundamental lesson here – to pay attention to stereochemistry of chiral alcohols when converting to alkyl chlorides – is ultimately more important than whether the reaction goes SN2 or SNi in certain situations. However,  it would be really nice to see more consistency on this reaction from the textbook writers so that everyone is singing from the same hymnal.

This instructor said it best:

Some of my colleagues just use PCl5 and move on with their lives : – )

43 thoughts on “SOCl2 Mechanism For Alcohols To Alkyl Halides: SN2 versus SNi”